Turkey bids farewell to 11 soldiers who died in helicopter crash 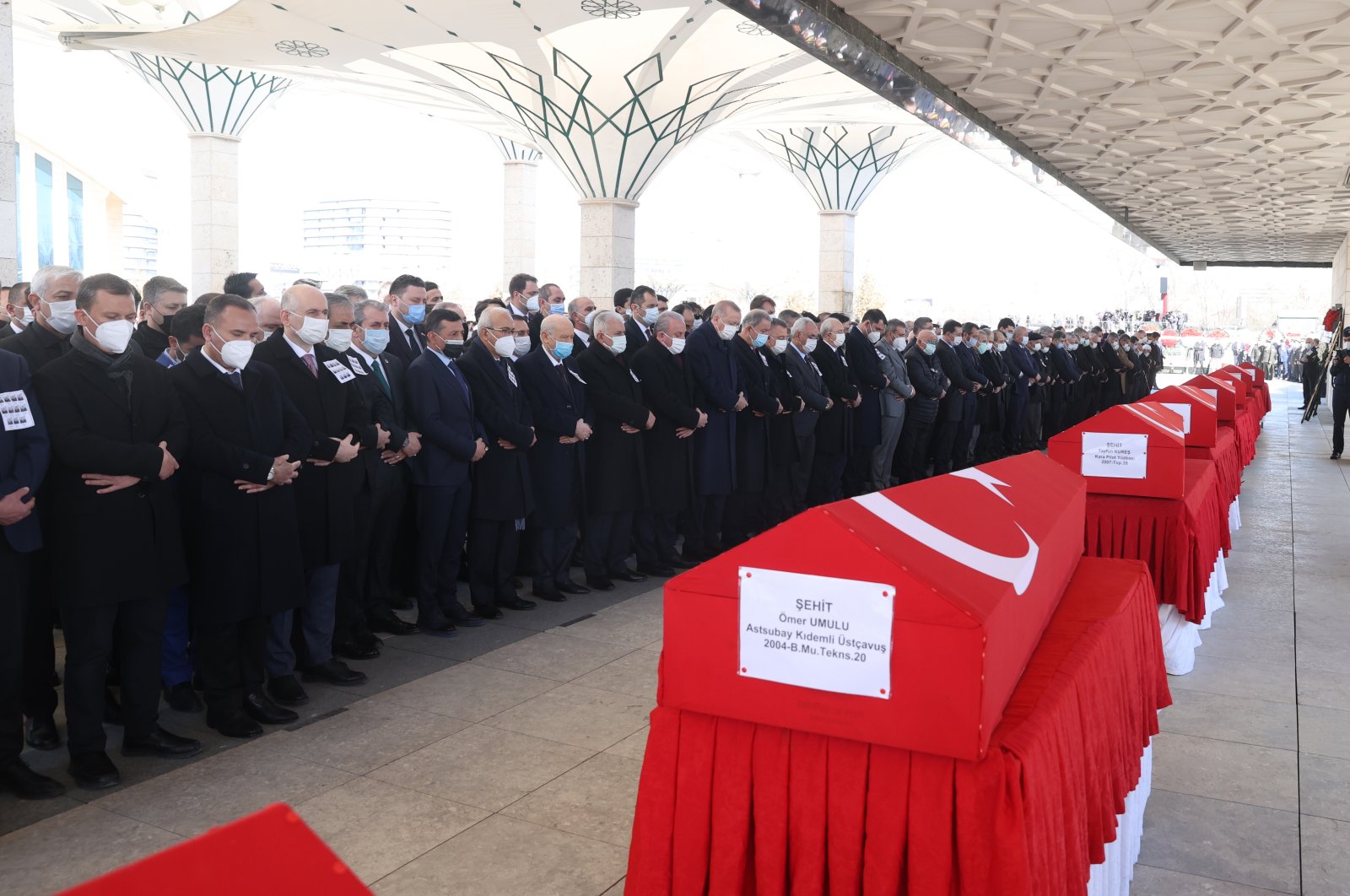 The nation on Friday mourned 11 soldiers who were killed in a helicopter crash in eastern Turkey one day earlier. Families, top politicians and a large crowd attended a mass funeral in the capital while the probe into the crash is underway

It was a Friday of mourning for the nation as flag-draped coffins of 11 soldiers were brought to the capital Ankara for a state ceremony. President Recep Tayyip Erdoğan, families and dignitaries gathered at a mosque to pay tribute for "martyrs," including a general, whose lives cut short with a helicopter crash.

The Eighth Corps Commander Lt. Gen. Osman Erbaş and his entourage were traveling from the eastern province of Bingöl to the Tatvan district in Bitlis on Thursday afternoon. About half an hour later, communications were cut off with their helicopter. In the evening, authorities announced it crashed in a rural area in Tatvan. Only two soldiers aboard survived the incident. An investigation is underway, but initial findings show bad weather in the region including thick snow and occasional blizzards were to blame.

All of the victims were career military officers, from specialist sergeants to the lieutenant general. Erbaş was traveling to Tatvan for a routine inspection of a military force deployed there, according to reports.

Speaking to reporters after a military funeral for soldiers in the eastern province of Elazığ, the minister of national defense said initial information and eyewitness accounts show the accident was caused by suddenly changing adverse weather. Teams of investigators were deployed at the snow-covered crash site on Friday for further investigation. This was the fourth crash involving Cougar-type helicopters which were first acquired by the army in 1996.

After the funeral in Elazığ, the soldiers' bodies were taken to Ankara for a “state ceremony.” Funeral prayers were performed at Ahmet Hamdi Akseki Mosque in the capital, with the participation of Erdoğan, ministers, politicians, families of victims and a huge crowd of citizens. The soldiers will be buried in their hometowns later.

“Martyrdom is the most honorable form of death. May Allah bestow it upon us as well,” President Recep Tayyip Erdoğan said in remarks following the funeral. The president delivered a eulogy for Osman Erbaş at the funeral. “Our commander was known for his modesty, his humble stance. He was a different person. With this tragic accident, he and my other brothers gave back what Allah gave them. I hope we will meet again (in the afterlife),” Erdoğan said.

Condolences poured in from around the world after the crash. NATO Secretary-General Jens Stoltenberg phoned Turkish Foreign Minister Mevlüt Çavuşoğlu to convey his condolences and stressed that NATO is in solidarity with Turkey. Ann Linde, the Swedish foreign minister and chairperson-in-office of the Organization for Security and Co-operation in Europe (OSCE), spoke over the phone with Çavuşoğlu and extended her condolences.

Libya's Foreign Minister Mohamed Taher Siala also offered his condolences to Çavuşoğlu in a phone call. In a Twitter post, the U.S. Embassy in Ankara said: "Our thoughts are with the families of all those affected, and we wish a rapid recovery to the injured."

Georgian President Salome Zourabichvili said on Twitter: "@RTErdogan, my sincere condolences to you and to the people of Turkey over the crash of a military helicopter that has cost too many lives. This is a deeply saddening event and we stand with the families of those who lost their lives."

Turkish Cypriot President Ersin Tatar phoned Erdoğan and Foreign Minister Çavuşoğlu to offer his condolences over the soldiers who lost their lives in the crash, the TRNC presidency said in a statement.

"Deepest condolences to the people of Turkey for the loss of military personnel as a result of a helicopter crash in Bitlis province. We wish the relatives of those who lost their loved ones strength, and rapid recovery to the wounded @RTErdogan," he said. Venezuelan Foreign Minister Jorge Arreaza expressed his country's solidarity with the people and government of Turkey, sharing a photo of a Turkish flag on Twitter.