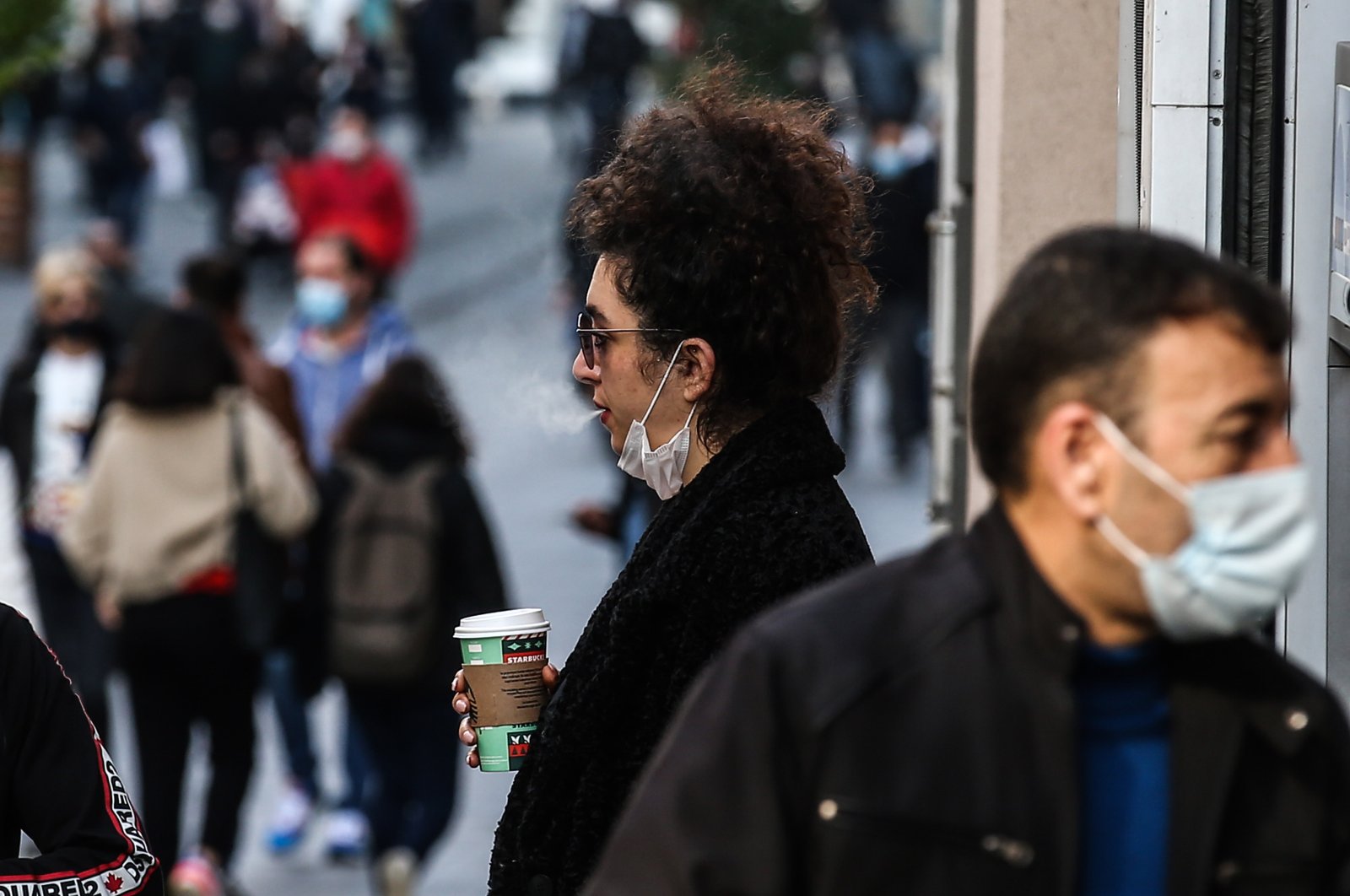 Scientists have long established that smoking is a deadly habit, but in the era of the coronavirus, it poses an even greater threat to public health. A member of the Health Ministry’s Coronavirus Scientific Advisory Board says cigarette smoke helps virus particles from an infected person spread farther. His warning comes one day after Turkey introduced a smoking ban in outdoor spaces across all provinces in a bid to quell the rise in COVID-19 cases.

According to an Interior Ministry circular sent to governorates across the country, smoking will be banned in most outdoor places, including crowded streets, mass transit stops and town squares.

The move came hours after the governorates of Istanbul and Izmir separately announced the smoking ban for their respective cities, with the Interior Ministry expanding the ban nationwide. Those violating the ban face a fine of TL 900 ($116).

Associate professor Afşin Emre Kayıpmaz of the Coronavirus Scientific Advisory Board said virus particles travel far when people talk, cough, shout or laugh loudly. “Similarly, people who smoke emit breath more prominently and the smoke they emit has the possibility of acting as a carrier for these particles. You have to keep a distance from smokers. The normal 'social' distance between people not smoking should be 2 meters (6.6 feet), and if one of them smokes, this should be at least 4 meters,” Kayıpmaz told Demirören News Agency (DHA) on Thursday.

He noted that people tend to smoke in groups during breaks at workplaces. “You have to remove your mask while smoking and if you smoke together with other people, this increases the likelihood of infection. The smoking ban is necessary for this reason,” he said.

Besides the risk of carrying particles via smoke, cigarettes pose a risk to smokers in terms of their own health. “Smoking can damage lung texture due to its carcinogen ingredients and can cause vascular diseases. Studies show the coronavirus disease is more damaging for smokers. Thus, it has both a direct and indirect impact on the pandemic. If you have to smoke, you should at least smoke alone and keep your distance from others more than you do so while not smoking,” he warned.

While Turkey has avoided resorting to the strictest measures, the increasing number of infections forced the government’s hand to bring certain restrictions back. On Tuesday, the Istanbul and Ankara governorates announced a curfew for citizens aged 65 and above, only allowing them to go outside from 10 a.m. to 4 p.m.

The total number of COVID-19 patients since the beginning of the outbreak in March exceeded the 400,000 threshold and fatalities now stand at 11,145, with the total number of recoveries having reached 344,613.

“Our health workers are doing everything they can to keep the patient loads in our hospitals at a manageable level. We can only defeat this outbreak by working together,” Health Minister Fahrettin Koca wrote, shortly after the announcement of daily figures on Wednesday.

The country introduced a nationwide indoor smoking ban in 2009 at restaurants, bars and similar establishments that gradually extended its reach to other enclosed spaces over the years, in addition to a complete smoking ban on school grounds and ban on selling tobacco products at educational facilities. Smoking rates are on the decline across Turkey, but the deadly addiction still takes a heavy toll. The country spends a whopping $25 billion annually on smoking, either in terms of the tobacco itself or treating the diseases it causes. According to the Fight Against Smoking Association, the public spends $15 billion per year on cigarettes, while the government spends $10 billion to treat smoking-related illnesses.

Turkey usually shies away from blanket bans or nationwide restrictions and acts on a provincial basis, leaving each of the 81 provinces responsible for the implementation of their own measures based on local trends. Public health boards set up in provinces decide on the scale of restrictions or measures. Bahşılı, a small district of about 8,000 people in the central province of Kırıkkale, is among those taking its own local measures against infections. The district’s public health board recently introduced a scheme to allocate bracelets of different colors to distinguish positive patients and the people they came in contact with. Bahşılı Gov. Bekir Yalçın says that the scheme, launched a week ago, proved successful, with a 50% drop in new infections.

Health care crews give a red bracelet to positive patients and green ones to people they came in contact with. Those wearing the bracelets are inspected daily, and if they are found to have broken their isolation, they are fined TL 3,150.

Yalçın told Anadolu Agency (AA) on Thursday that the bracelets can only be removed by health care crews. He said that along with routine checkups, locals can report anyone they see wearing a bracelet outside to the authorities. So far, nobody fitted with a bracelet has attempted to remove it.

Preventative measures are helping curb the number of patients, but Turkey looks forward to eliminating the virus completely. A vaccine is one of the new developments providing hope on that front.

Two health care workers injected with CoronaVac, developed by China’s Sinovac, developed antibodies, an official announced Thursday. Professor Mustafa Kemal Çelen of Dicle University in the southeastern province of Diyarbakır told DHA that the vaccine’s efficiency was at a rate between 85% and 90%. About 80 health care workers volunteered for the Phase 3 trials in the province, with trials underway in other provinces, too. Çelen, who also serves as a member of the local pandemic board, said no serious side effects were recorded so far among volunteers.

Turkey last week started human trials for its own vaccine, while trials are also continuing for a vaccine jointly developed by U.S.-based Pfizer and BioNtech of Germany.

Erciyes University in the central province of Kayseri was the first to start human trials for the country’s locally produced vaccine. The university’s president, professor Mustafa Çalış, said no side effects were seen in volunteers so far. He said two volunteers were inoculated and a third was set to begin the trial on Thursday. “We plan to wrap up Phase 1 in the first week of January and hope it will be successful,” he told Ihlas News Agency (IHA).