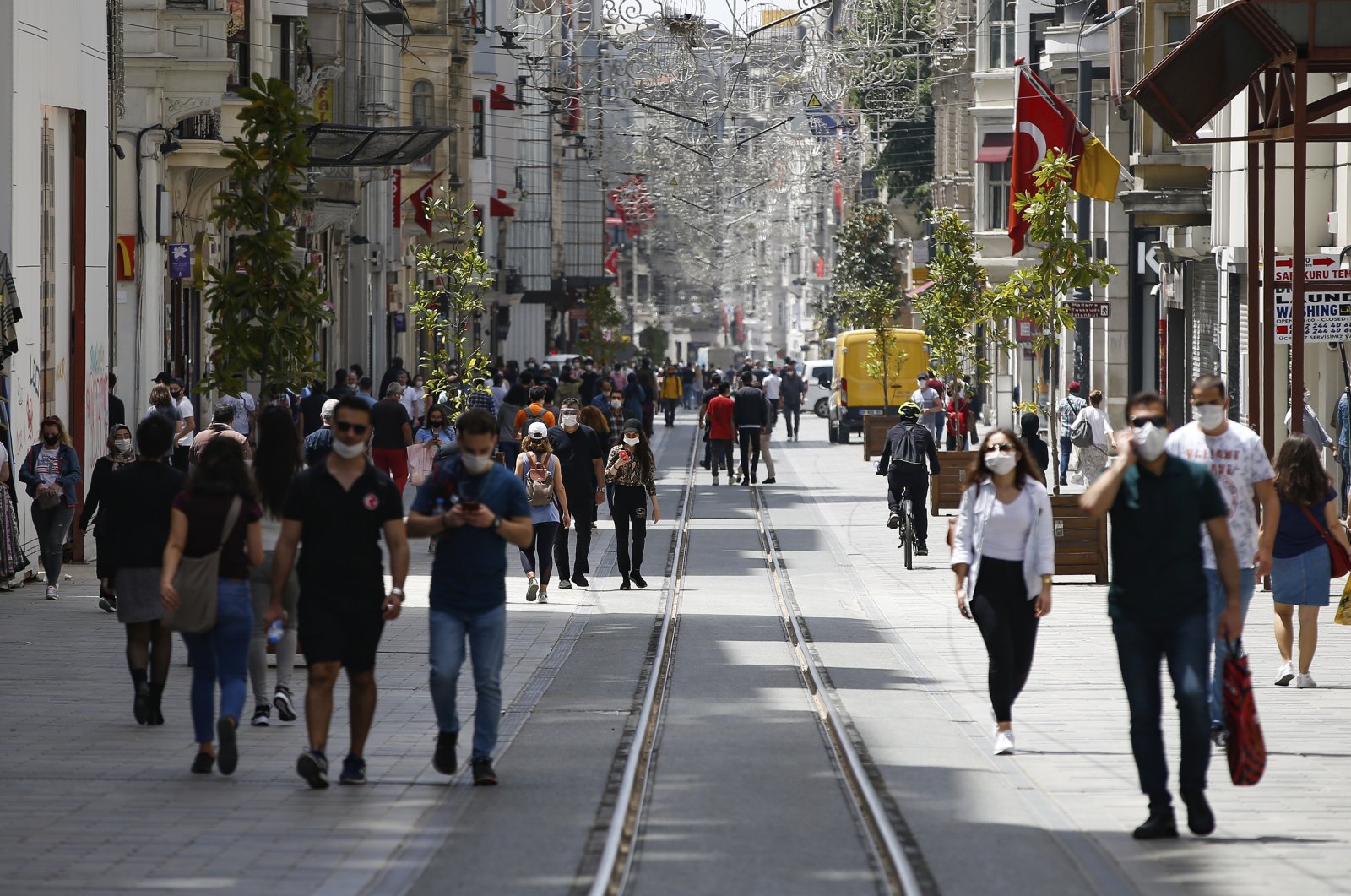 As Turkey officially entered its second phase of its fight against the COVID-19 outbreak, President Erdoğan announced the lifting of almost all restrictions placed on daily life

Turkey is set to take its biggest step toward returning life to normal on Monday as President Recep Tayyip Erdoğan announced the largest rollback on restrictions put in place to slow the COVID-19 outbreak.

In a televised address following a weekly Cabinet meeting, the president on Thursday said travel restrictions placed on the country’s worst-affected 15 provinces would be lifted on June 1, while restaurants, cafes and gyms will be allowed to reopen.

“As of June 1, travel restrictions between provinces will be removed entirely. We can, however, reimpose this restriction if developments force our hand,” Erdoğan warned.

According to the president, parks, beaches, museums, daycare centers and libraries will also be opened, while people will be permitted to attend open-air concerts. For the time being, only bars and hookah lounges will remain closed.

The president’s announcement comes amid a drop in the number of reported daily COVID-19 deaths and infections in the past weeks. According to Health Minister Fahrettin Koca on Thursday, Turkey’s total death toll stood at 4,461, while the number of cases increased to 160,979 with 1,182 new confirmed patients in the past 24 hours.

Despite having the 10th highest number of coronavirus cases in the world according to data from Johns Hopkins University, Turkey has less than 40,000 active cases as more than 70% of the patients have recovered.

The green light to reopen many public places was the latest phase of Ankara’s plan to return life to normal. The government previously ordered barbers, beauty salons and shopping malls to reopen with a limited capacity.

Friday will also see the faithful returning to mosques for communal prayers after being banned on March 16. The Presidency of Religious Affairs (Diyanet) allowed mosques to hold communal prayers for noon, afternoon and Friday prayers. A ban on public morning, evening and night prayers will still remain in place. Mosques will nevertheless remain open for the faithful to pray alone.

While he announced the restrictions on daily life would be mostly lifted by Monday, the president once again warned the public to remain cautious about the virus threat.

“I hope the decisions we took will be beneficial to our country. But I want to reiterate three important priorities of the new normal. Mask, distance and hygiene. Please don’t neglect these priorities. We need to wear a mask outside and pay utmost attention to distancing and proper hygiene,” he said.

Erdoğan also said the weekend curfews imposed on the 15 provinces would end with the travel restrictions as well, which meant the locals in these provinces would have to endure one last curfew that will come into effect as of midnight on Friday.

The curfew will be imposed in the capital Ankara and the country’s most populous city Istanbul, as well as Izmir, Balıkesir, Bursa, Eskişehir, Gaziantep, Kayseri, Kocaeli, Konya, Manisa, Sakarya, Samsun, Van and Zonguldak.

Markets and grocery stores will continue to operate from 10 a.m. to 5 p.m. local time on May 30 but will be closed on May 31. Bakeries will remain open for the duration of the curfew.

First declared on April 11 and expected to be the last curfew for the foreseeable future, the president, however, warned that just like the travel restrictions, the curfews might return if the outbreak crisis worsens again.

While the weekend curfews are set to end after the weekend, senior citizens, however, were disappointed as Erdoğan said the government decided to extend the stay-at-home order imposed on the elderly for a while longer.

The government initially imposed a curfew for the country’s senior citizens, ordering anyone aged 65 and above to stay home. The curfew was later extended to include youth aged 20 and below, as the number of coronavirus cases increased dramatically during the initial phases of the outbreak.

With the improving outlook, however, the curfews placed on various age groups were relaxed over time, and the government allowed seniors to go out on Sundays, while children as old as 14 were given Wednesdays, and youth between the ages of 14 to 20 were granted Fridays.

Although the curfew for the elderly remained unchanged, a further ease of restrictions for the youth was announced by the president.

“We are reducing the age bar for the youth curfew from 20 to 18. Our youth aged 18 and below will be allowed to outside on Wednesdays and Fridays from 2 p.m. to 8 p.m. They won’t be split into two groups anymore,” he said.

“We evacuated more than 75,000 citizens from 126 countries with 365 flights, 34 land and 10 sea trips. From Mauritania to Bolivia, we didn’t leave a single citizen abandoned wherever they were,” he said.

Ankara launched its first evacuation effort on Jan. 30 to repatriate its citizens from China’s Hubei province, the then-epicenter of the outbreak.

Turkey previously placed evacuated citizens in dormitories for a 15-day mandatory quarantine but the practice has since been abandoned with the outbreak crisis improving. The Youth and Sports Ministry – which oversees the operation of dormitories – said there were no citizens left quarantined in the dormitories as of Tuesday.

Those arriving in the country are still subject to a mandatory 15-day quarantine, but citizens are now asked to self-isolate in their homes.

While the announcement of an end to travel restrictions was anything but surprising, it was still an impatiently awaited move for millions residing in the affected cities.

With the schools declared over for the remainder of the year and Ramadan Bayram, also known as Eid al-Fitr, over, many Turks living in the country’s urban areas were eagerly waiting for the announcement to move into their summer houses or travel to their hometowns to spend the season.

A time-old custom in Turkey, the end of the school year indeed marks a large exodus from the dense cities into smaller towns, with traffic in cities like Istanbul – home to more than 18 million – becoming gridlocked as people rush to highways to leave, while others flock to airports and bus terminals.

Hours before the president’s announcement, intercity train services resumed on a limited basis with 16 trips daily, connecting the cities of Ankara, Istanbul, Konya and Eskişehir.

Transportation Minister Adil Karaismailoğlu said travelers showing signs of illness would not be allowed onto trains. Any passenger exhibiting COVID-19 symptoms on a train will be taken to a special “isolation section” and handed over to health officials at the nearest station, he said.

Intercity buses, meanwhile, were never stopped but they were previously ordered to travel at 50% of their passenger capacity and with travel restrictions many bus operators severely reduced the number of daily trips.

The reduced number of trips and passenger capacity caused ticket prices to spike as much as 400%, forcing the government to introduce price ceilings for bus fares.

Most of the potential travelers, however, wondered what air travel will look like with the eased restrictions.

Turkish Airlines CEO Bilal Ekşi earlier on Tuesday introduced a set of rules and guidelines that would come into effect as the national flag carrier prepares to resume flights on June 5.

According to Ekşi, passengers will be required to wear a mask during the flight and will have to change them every four hours. He also said passengers will not be allowed to bring carry-on luggage, except a small handbag or a backpack. Boarding will be done in an orderly fashion with passengers not allowed to board or deboard without being announced by ground personnel or flight attendants.

The CEO denied claims that the middle seats would be left empty to leave distance between passengers, saying such a measure was neither required nor recommended by the European Union Aviation Safety Agency.

Despite all the precautions taken by the travel authorities, health experts warned about the risk of potential infections if people rushed to travel the moment restrictions expired. Experts instead urged would-be travelers to wait a while longer to avoid creating crowds and congestion to allow proper social distancing to be carried out.