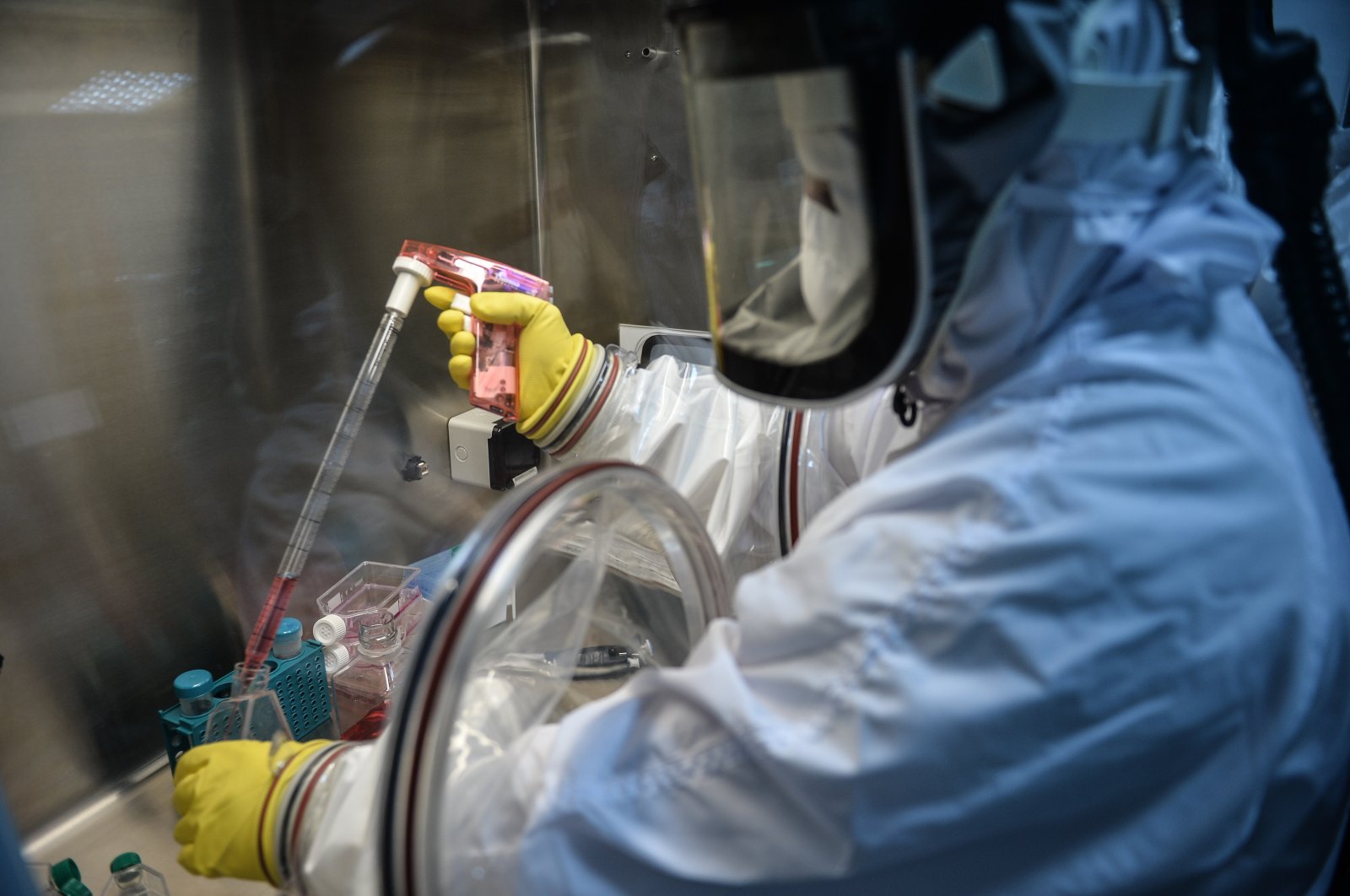 President Recep Tayyip Erdoğan announced human trials for a locally made vaccine against COVID-19 will start within two weeks. Meanwhile, a U.S.-German made counterpart is set to start trials Thursday

A locally made vaccine is closer to reality as Turkey grapples with a surge in coronavirus infections. President Recep Tayyip Erdoğan said on Tuesday after a Cabinet meeting that it was apparent that the human trial phase will begin within two weeks for vaccines developed by Turkish scientists. He also acknowledged “important progress” in the application of vaccines developed elsewhere. Officials, in the meantime, announced on Wednesday that a vaccine developed by U.S.-based Pfizer and German BioNTech will start human trials Thursday.

Health Minister Fahrettin Koca announced last month that Turkey was days away from human trials for three vaccines out of 13 under development. Turkish scientists are also working on 10 projects for the development of drugs against the deadly disease.

Erdoğan said they aim to “take concrete steps” by the end of 2020 and “solve the vaccine issue by spring.” The president did not name which vaccines will be in the human trial phase within weeks, but media reports say two vaccines developed by Erciyes University in the central province of Kayseri and another by private company Koçak Farma were close to human trials. Groups of healthy volunteers, composed of 20 to 80 people, will be injected in the first stage. The number will increase in the following stages and will eventually reach at least 3,000 people in Turkey and abroad. Advancing to the next stages will depend on whether the vaccines have serious side effects on volunteers.

Hacettepe University in the capital Ankara, where Sinovac, a vaccine from China had its first human trials in Turkey launched recently, will now host the first stage of the U.S.-German vaccine. The university will coordinate the work in nine centers across the country and some 550 volunteers will be injected. Professor Murat Akova of the university said up to 80 volunteers will get first shots on Thursday in Ankara and they plan to inject five to 10 people daily for the Phase 3 trial. “Two doses will be injected, with the second one applied 21 days after the first dose,” Akova told Demirören News Agency (DHA) on Wednesday. “We will monitor the efficiency and reliability of the vaccine and volunteers will be observed for one year, to see whether they will develop illnesses,” he said.

The Pfizer-BioNTech vaccine is one of the leading candidates in the race to be the first to get regulatory approval in the United States and Europe. It launched Phase 3 of its clinical trials at the end of July. A messenger RNA (mRNA) vaccine – an experimental new platform that has never been fully approved before – it injects people with the genetic material necessary to grow the "spike protein" of SARS-CoV-2 inside their own cells, thus eliciting an immune response the body will remember when it encounters the real virus. This effectively turns a person's own body into a vaccine factory, avoiding the costly and difficult processes that more traditional vaccine production requires.

The university also monitors the vaccination of Sinovac to volunteers at 25 centers across the country. Around 13,000 volunteers will be injected with the Chinese-made vaccine. Akova said apart from minor side effects, the vaccination work was going smoothly. “We have so far no injected volunteers infected with coronavirus,” he said. The vaccine appeared to be safe in a late-stage clinical trial in Brazil, preliminary results showed Monday. Sao Paulo's Butantan Institute, one of Brazil's leading biomedical research centers, which is carrying out the Phase 3 tests, said the two-dose vaccine, proved to be safe in a trial so far involving 9,000 volunteers.

Since the virus made its foray into Turkey, the country reported more than 351,000 patients. Close to 9,445 people died while more than 306,000 people recovered. So far, more than 12.6 million tests were conducted.

Authorities reported a surge in the number of patients especially in big cities in recent weeks but the outbreak seems to follow a stable trend elsewhere. Thus, the country continues rolling out more “normalization” steps. Erdoğan announced on Tuesday that fifth and ninth-grade students will return to school for in-person education on Nov. 2. Other grades gradually started in-person education since September though school days were limited for some grades and a hybrid education model involving both in-person classes and online education is in place.

Health Ministry announced on Wednesday that a nationwide coronavirus prevalence screening was being held in cooperation with the Turkish Statistical Institute (TurkStat). Around 31,280 households across the country will be visited and one person from each household will be examined to detect the pandemic prevalence and its level of impact. A cross-sectional study that started last week will end on Oct. 30. The study will cover all provinces and all age groups. Contact-tracing crews who are deployed to monitor the contacts of positive patients will conduct the study by taking blood samples and nasal swabs from randomly picked household members.