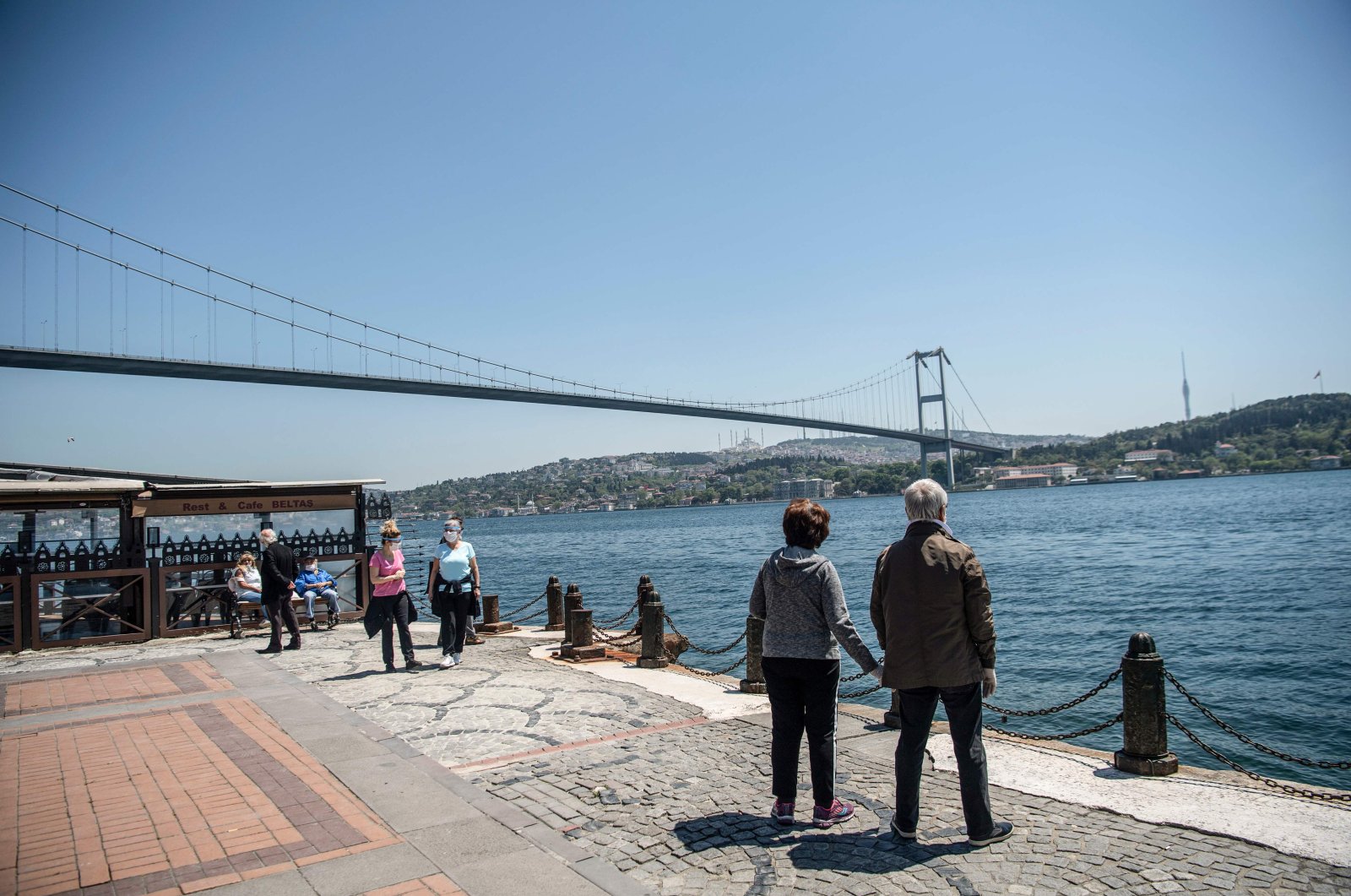 An elderly couple wearing protective face masks looks out toward the July 15 Martyrs' Bridge in the Ortaköy neighborhood of Istanbul, Turkey, May 10, 2020. (AFP Photo)
by DAILY SABAH May 12, 2020 2:50 pm

President Erdoğan announced the lifting of travel bans for nine more provinces, leaving only 15 cities under restrictions as Ankara continues to relax virus containment measures with the number of new cases continuing to decline

Travel restrictions were lifted from nine more provinces, President Recep Tayyip Erdoğan announced Monday, as part of Turkey’s normalization process now that the coronavirus crisis has been brought under control.

Announcing the decision at a national address after a Cabinet meeting, Erdoğan said the improving outlook of the COVID-19 outbreak allowed the government to ease restrictions placed on citizens' daily lives.

According to the president, entry and exit from Adana, Diyarbakır, Mardin, Trabzon, Ordu, Denizli, Kahramanmaraş, Şanlıurfa and Tekirdağ were allowed once again. The country’s most populous cities, Istanbul and İzmir, as well as capital Ankara, remain under restrictions.

Ankara restricted travel from 31 provinces initially, barring any entry and exit by land, air and sea except for the movement of goods and public personnel on official duty. The restriction was first imposed on March 17 for 15 days and was later extended twice.

Antalya, Aydın, Erzurum, Hatay, Malatya, Mersin and Muğla were the first batch of provinces that had their travel restrictions lifted.

“I thank each and every one of our citizens for dutifully and respectfully complying with the rules. This bright outlook allowed us to ease restrictions placed during the outbreak in a controlled fashion. But as I have said before, our country, along with the rest of the world, has entered a new era where we need to learn to live with new rules. It is clear that the world still needs time to beat the coronavirus pandemic for good,” the president said.

Erdoğan’s warnings were the latest in a string of calls by authorities for citizens to not ease up on precautions as Turkey entered the normalization period. Health Minister Fahrettin Koca and experts on the country’s Coronavirus Science Board have repeatedly warned citizens that the easing of restrictions did not mean the threat of the virus was over, and any sign of a second wave of the outbreak would mean the restrictions would return.

The brighter outlook Erdoğan referred to was further solidified as shortly after the president’s speech, Koca announced Turkey’s latest coronavirus numbers, which indicated that the downward trend in new cases was continuing.

According to Koca, while the daily death toll increased from the previous day’s 44 to 55 on Monday, there was a considerable drop in new cases.

Monday’s 1,114 new confirmed cases was the lowest since March 25, despite a nearly fourfold increase in daily test numbers.

Calling on citizens to continue practicing social distancing measures and to wear masks at all times outside their homes despite declining numbers, Erdoğan reiterated that return to life before the outbreak was not possible for the time being.

“Our citizens must not interpret the easing of restrictions as a return to a time before March 10,” he said, referring to the date when Turkey announced its first confirmed coronavirus case.

“There are a lot of examples across the world as to how a slightest let-up can lead to catastrophe," Koca emphasized.

“Those that go outside without important business, those creating crowds on the streets and mass transit vehicles are the ones who are fueling this outbreak. We need to continue living with restricted measures for a long time. The sooner we accept the fact, our fight against the virus will be that much stronger,” he said.

Speaking about the weekend lockdowns and curfew for the elderly and the youth, the president said he was delighted to see senior citizens across the country going out for a walk this weekend, after months of being locked in their homes, while following the rules and guidelines.

While the president said the measures on seniors and the youth will be further relaxed, he also announced a four-day general curfew beginning May 16. The reason for the extended curfew is because May 19 is a public holiday in Turkey, and Ankara previously made similar decisions to impose extended curfews on public holidays that fell close to the weekends.

Since March 21, around 7.5 million senior citizens have been under lockdown, banned from going outside in a measure taken to stop the spread of the new coronavirus. The same restriction was imposed by the government for people under the age of 20 on April 4.

Turkey has not imposed a stringent nationwide lockdown since reporting its first positive case, resorting instead to weekend curfews in 31 provinces and cities. However, like the travel restrictions, provinces that showed few new cases were excluded from the curfew list.

Underlining the importance of donning a face mask when going outside at every opportunity during his speech, Erdoğan also announced Turkey would standardize the manufacturing process of cloth masks to protect citizens against defective products and to capitalize on the global demand for the protective equipment during the pandemic.

The cloth masks, once considered a fashion accessory to offer minimal protection against smog in denser cities, emerged as a competitor to surgical masks after acquiring the latter became near impossible for many around the globe as production capacities worldwide failed to keep up with the demand.

“We have so far distributed 450 million masks to our citizens and our workers with various methods. We have also removed the ban on mask sales with a price cap of TL 1 ($0.14) per mask. Now we are taking a new step about cloth masks,” he said.

According to the president, the standards were decided after a joint collaboration between the Trade Ministry, the Industry and Technology Ministry, the Scientific and Technological Research Council of Turkey (TÜBİTAK) and the Turkish Standard Institute, as well as producers. Erdoğan said a similar price cap would also be announced for the cloth masks to avoid price gouging.

Also speaking about the Başakşehir City Hospital, the massive hospital complex that was partially opened last month to assist Turkey’s fight against the outbreak, the president said the second phase of the opening would be May 21.