Turkey remembers Mustafa Kemal Atatürk on anniversary of his passing 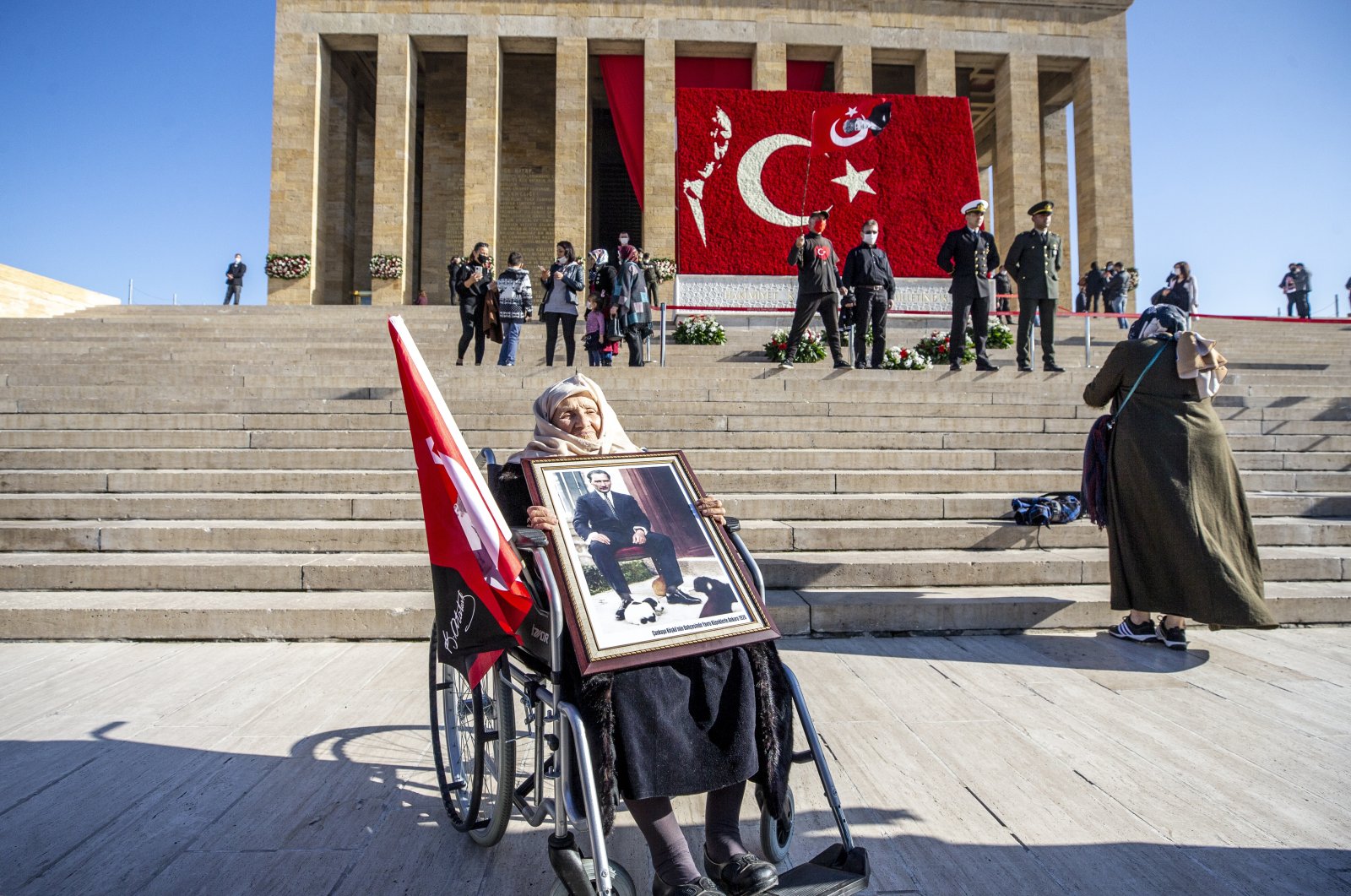 The nation united Tuesday to commemorate the 82nd anniversary of the passing of Mustafa Kemal Atatürk, the founder of the republic who led Turkey to independence after the collapse of the Ottoman Empire

Life came to a standstill at 9:05 a.m. this morning, noting the time of the death of Mustafa Kemal Atatürk, one of the most revered figures in modern Turkish history. The founder of the Republic of Turkey was remembered across the nation on the 82nd anniversary of his passing on Tuesday.

One of the greatest statespeople of the 20th century, Atatürk is credited with shaping a new country from the ashes of the Ottoman Empire. His life was cut short, as he died at the age of 57, succumbing to cirrhosis.

The coronavirus pandemic forced the country to scale down its usually crowded ceremonies commemorating the leader, but certain annual traditions were carried out. At Atatürk's time of death, sirens and car horns echoed across Turkey, followed by two minutes of silence in his memory. Across the country, somber ceremonies were held, wreaths were laid at the feet of monuments honoring the leader, and a long line of tearful mourners who had come to pay their respects formed at Dolmabahçe Palace in Istanbul, where the country’s first president spent his final hours.

An official ceremony was held at Anıtkabir, Atatürk’s mausoleum, in the capital Ankara. President Recep Tayyip Erdoğan and dignitaries, from Parliament Speaker Mustafa Şentop to leaders of opposition parties, attended the event where a wreath was laid at his grave. Erdoğan, signing a visitors’ book at the mausoleum, wrote: “Our nation remember Gazi Mustafa Kemal Atatürk and his heroic brothers in arms who crowned our nation’s struggle for existence with victory and left a legacy of an independent, free country. We will work for the eternal survival of our republic built on the sacrifice of our martyrs and to leave a prosperous, powerful, reputed country to future generations.”

Erdoğan later spoke at an event at the Presidential Complex organized by the Atatürk Supreme Council for Culture, Language and History on the occasion. He paid tribute to Atatürk and criticized those who “dogmatized” him and “those who try to make his legacy worthless” instead of pursuing his vision and honoring his memory by adapting to “the way of knowledge and mind.”

He said Turkey started pursuing global goals by fighting “a mindset of tutelage slave to the West that saw itself as the ‘owner’ of the state." “Those who were accustomed to run this country like a family company for years through a bunch of elites tried their hand to defeat us,” the president said. “We suffered from such a deep, heinous siege because we renewed our war of independence but this time, in a stronger way,” the president said.

Atatürk, born Mustafa in Thessaloniki in present-day Greece in 1881, pursued a military career after switching from a high school specialized in creating future bureaucrats to a military school in Monastir (Bitola), currently in North Macedonia. There, he was given the second name Kemal by a teacher in order to distinguish him from the many other Mustafas attending the school, although his penchant for learning made him stand out among his peers. He later traveled to Istanbul, the then-capital of the Ottoman Empire, to attend a military academy from which he graduated with the rank of staff captain in 1905. Following stints in Syria and Macedonia, he served in the Italo-Turkish War in Libya and Balkan wars. He gradually began climbing the ranks of the Ottoman army and was assigned the position of military attache to Sofia when he volunteered to go to the front lines in World War I. The war would bolster his reputation as a skilled military commander, particularly in the Gallipoli campaign, and he rose to the rank of general in 1916 while serving as a commander on the eastern front. As the war drew to a close and the long-standing empire began to crumble, he launched an initiative with a group of patriots to start a secret war of independence against invading Western powers.

Atatürk was an army inspector when he traveled to Samsun on the Black Sea coast from Istanbul. His arrival in Samsun on May 19, 1919, is now largely considered the first concrete step in the fight for independence for the Turkish nation following World War I, after being sentenced to death, as he rallied military commanders and civilians in Anatolia in his campaign for independence. Resigning from his military career, he embarked on a mission to garner public support in conventions held in cities in the Anatolian heartland. A charismatic figure with military credentials, he was embraced by an Allied-occupied nation torn apart by years of war. He called for the members of the last Ottoman parliament to convene in Ankara in 1920. Then came the Treaty of Sevres between the Ottoman Empire and the invading forces which sought to relinquish Turkish territories to the Allied forces of World War I, but Mustafa Kemal announced that the Parliament in Ankara would not recognize it. After a series of victories against invading Greek forces, he launched the Büyük Taarruz (Great Offensive), an all-out war against the invaders that ensured the survival of the nation and the birth of a new country.
Following multiple battles and treaties, Turkey emerged as the successor of the now-defunct Ottoman Empire, and in 1923, Mustafa Kemal declared the establishment of the Republic of Turkey. He was elected the first president of the republic, an office he held until his death. To this day, he remains the longest-serving president.
Today the leader is better known by his last name than his first, but Mustafa Kemal was actually given his last name at a much later stage in his life. A law mandating citizens to use surnames was enacted in 1934, and Mustafa Kemal was endowed with the surname Atatürk, which literally means “the father of Turks.” Atatürk proved his tenacity on the battlefield but also demonstrated that he was more than a commander-in-chief in post-war Turkey. He drafted new economic policies and the country’s foreign affairs at a time when the world had declared war against the country just a few years earlier. His motto, “Peace At Home, Peace In the World” inspired generations of statespeople in their approach to the country’s diplomatic affairs.
Atatürk’s health worsened in early 1938, and he was confined to Dolmabahçe Palace in Istanbul for the majority of his final days. Following his death, Atatürk’s body was taken to Ankara and placed in a temporary grave at the Ethnography Museum of Ankara. His body was transferred to its current resting place, Anıtkabir, a spectacular mausoleum, in 1953.