Turkey will not forget medical staff lost to COVID-19 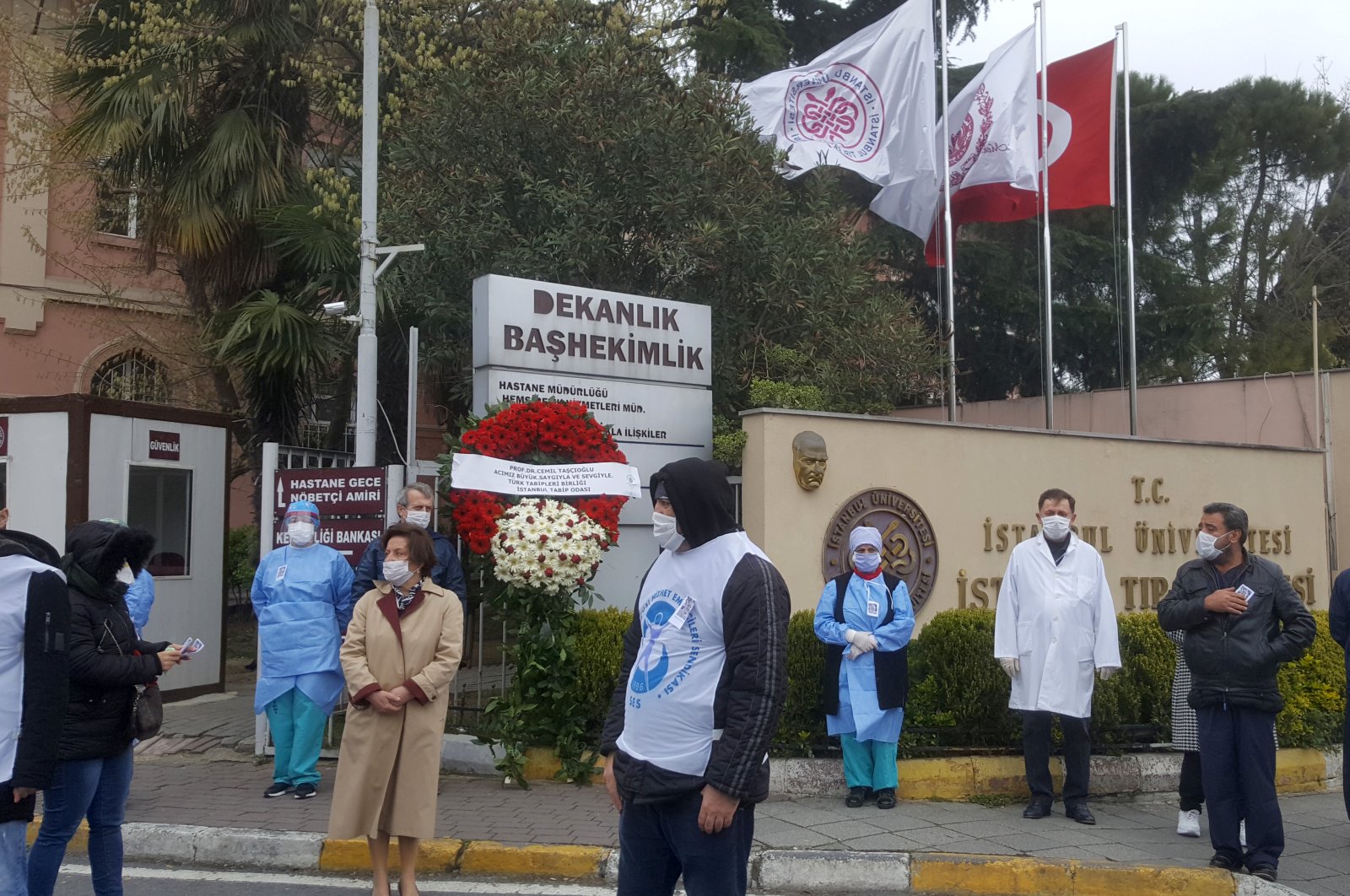 Health workers throughout the world have become heroes in the fight against COVID-19. Many doctors, nurses and health workers who have been struggling to treat their patients have succumbed to the coronavirus.

Just as brave health workers across the world are fighting the virus, Turkey’s doctors, nurses and health workers have also been burning the midnight oil, away from their families on the frontlines of the coronavirus pandemic.

Since the confirmation of the first case in Turkey on March 11, the number of cases has exceeded 34,000. Turkey has lost around 725 of its citizens in a month. All health, authorities, the Coronavirus Science Board, academicians and almost 1 million health workers have been working passionately for Turkey, which is the eighth worst-hit country by the number of cases, to overcome this deadly pandemic with minimal casualties.

While the state has been mobilizing all means for health workers, the greatest appreciation toward them has been shown by the Turkish people. Millions have been going to their windows and balconies at 9 p.m. every evening over the past few weeks all around Turkey to show their gratitude to health workers with applause and cheers.

However, in Turkey, too, some of these heroes who took all risks and continued to help patients have lost their lives to the virus. Among these are valued medical experts who provided invaluable service to Turkey’s health system and taught thousands of doctors.

Dr. Cemil Taşçıoğlu, Dr. Feriha Öz, Dr. Muharrem İdiz, Dr. Mehmet Ulusoy, Dr. Fevzi Aksoy and health worker Dilek Tahtalı are among those who have died during the fight against COVID-19. About 601 health personnel are currently infected by the coronavirus in Turkey.

Health Minister Fahrettin Koca, who is also a doctor, could not hold back his tears last week when speaking about health workers who have tested positive for the virus. He said he believes that health heroes who passed away should be accepted as martyrs. He is not alone in this view since a large part of the public thinks the same.

Taşçıoğlu, a Turkish doctor with decades of experience who died last week after contracting COVID-19 from a patient, was the first doctor in the country to succumb to the virus. Taşçıoğlu was a professor of internal medicine at Istanbul University who trained thousands of medical students in Turkey.

He is also the doctor who diagnosed the first patient with COVID-19. After being infected, he was admitted to Istanbul University’s Faculty of Medicine on March 16 with symptoms of fever, cough and respiratory distress.

Born in Turkey’s Black Sea Rize province in 1952, Taşçıoğlu was loved by his students and patients alike. After graduating from Istanbul University’s Faculty of Medicine, Taşçıoğlu did his residency in southeastern Şanlıurfa province. He later returned to Istanbul University and earned the title of internal medicine specialist, then associate professor and later professor.

Described by his close colleagues as a pillar of the community, who everyone loved, from his assistants to his students, Taşçıoğlu continued practicing even past retirement age. Before his untimely passing, he made many important contributions to internal medicine.

President Recep Tayyip Erdoğan announced after his death that a research hospital in Istanbul would be named after Taşçıoğlu to commemorate his work.

Taşçıoğlu’s son Onur Taşçıoğlu, who tied his father’s favorite necktie on his tombstone, said to his father’s students: “You will live once. Dream so big that you will have to give all you have to realize it. Love so big that you can fight the world. Make friendships that are real and sincere. When was the last time you told your loved ones that you loved them? Do not postpone anything, or the things that you could not say will be a burden to you.”

Erdoğan himself delivered a message saying: “Dear Onur... your esteemed father, professor Dr. Cemil Taşçıoğlu, will be a source of inspiration to all our health workers and doctors that we are proud of today and will hopefully also be proud of in the future. His memory will live with us forever. May he rest in peace.”

One of the other victims was microbiologist Dr. Mehmet Ulusoy, who worked at Istanbul Meltem Hospital. Ulusoy was one of the members of the Istanbul Medical Chamber. The Chamber released a statement after his passing, extending their condolences to his family and relatives.

Dilek Tahtalı, 33, who had Familial Mediterranean Fever (FMF), was working as a record keeper in a private hospital in Istanbul and being treated for high fever, cough and exhaustion. The last words of Tahtalı, who despite all efforts lost her life on March 25, were “Mother, I miss you, I love you.”

Another doctor, Muharrem İdiz, died of COVID-19 thought to have been contracted from one of his patients. İdiz’s colleague wrote on social media, “We are deeply in sorrow for losing the first colleague in İzmir and our classmate Dr. Muharrem İdiz. For those who did not comprehend the gravity of the situation, this is not the first and will not be the last colleague to be a martyr.”

Istanbul University Faculty of Medicine Dean Mustafa Sait Gönen announced her death on Twitter. "We are saddened by the loss of Feriha Öz, who brought up thousands of doctors, diagnosed tens of thousands of patients," he said.

Born in Istanbul, she studied medicine at Istanbul University before working as a doctor at the Cerrahpaşa Medical Faculty, where she was a prominent name in the field of pathology.

Professor Dr. Fevzi Aksoy, a prominent neurologist, also succumbed to the virus at the age of 90 after checking into a hospital due to suspected COVID-19 symptoms on March 28. Aksoy, who was at the same time a sports writer and academician, had worked in Istanbul University’s Psychology Clinic as head of the Health, Culture and Sports Department and trained thousands of students.