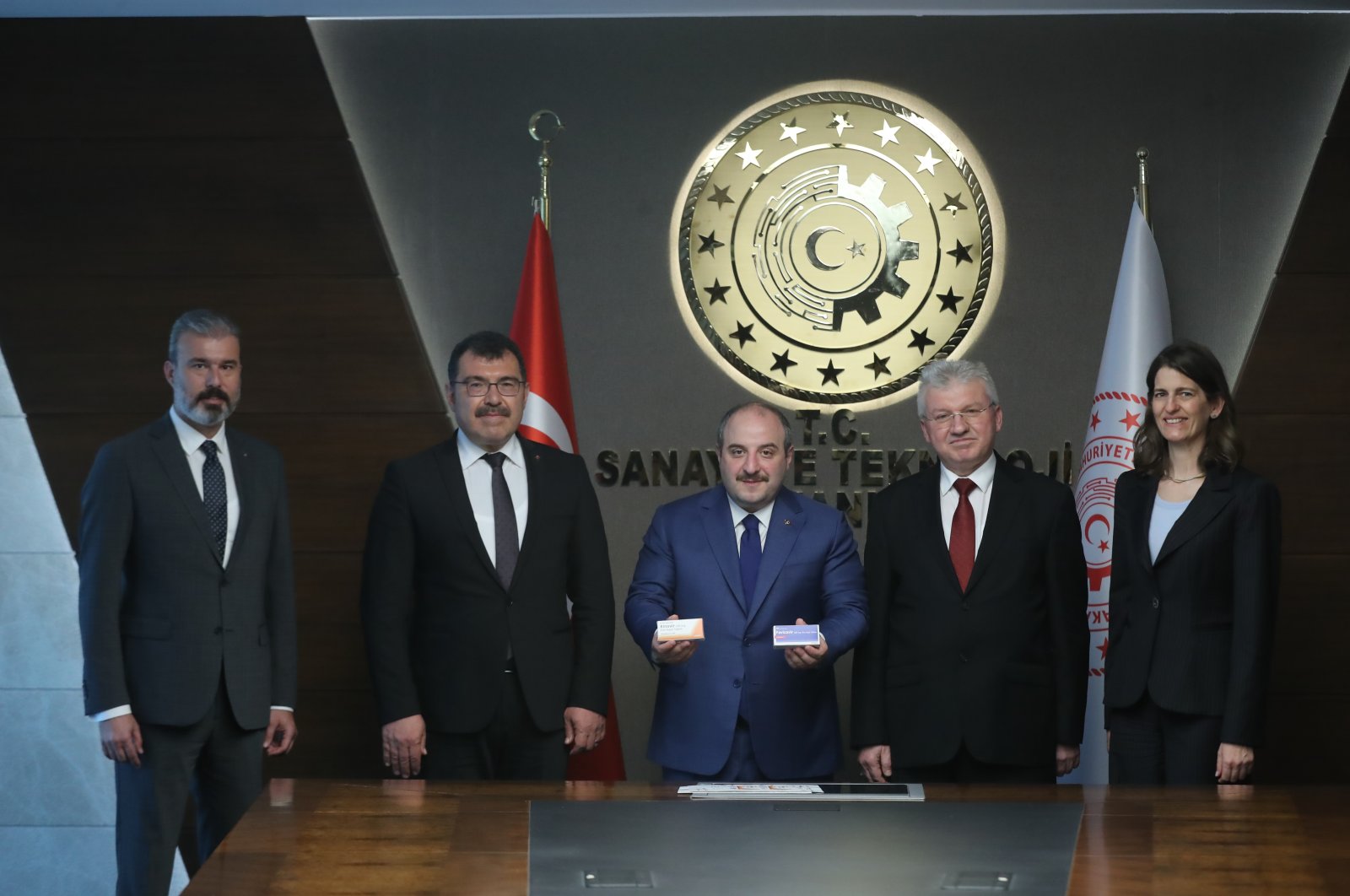 Industry and Technology Minister Mustafa Varank (C) holds favipiravir in a meeting with developers of a local synthesis of the drug, June 12, 2020. (AA Photo)
by DAILY SABAH WITH AA Jun 12, 2020 1:04 pm
RECOMMENDED

“It is a source of pride and elation,” said Varank after a meeting with developers of the drug.

Based on the results of early trials, the Japanese-developed flu drug favipiravir, also known under the brand name Avigan, has been shown to be effective in both reducing the duration of the coronavirus in patients and improving the condition of their lungs, its main point of attack.

According to the Ministry of Health, favipiravir brought from China is being used under a unique protocol in Turkey. Turkish doctors have discovered that early intubation extends the length of the disease while administering high-flow oxygen leads to more successful and faster treatment.

Heads of favipiravir’s developer team, Güzel and Taşkent, along with TÜBITAK head Hasan Mandal, visited Varank to present the first sample of the drug.

“We have produced a significant medicine developed by our own synthesis, with domestic capabilities. Now, it is in the licensing phase. The health minister said at the Cabinet meeting that he instructed for the immediate registration of these drugs,” Varank said.

He added that once the licensing process is completed, the drug will be used in Turkey. Varank also drew attention to “significant export opportunities.”

TÜBITAK head Mandal previously said that Turkey’s COVID-19 Turkey Platform is working on 17 projects in synergy both in medicine and vaccine groups. The platform includes 225 researchers from 25 universities, eight public research bodies and eight private firms. Favipiravir is one of the platform’s projects. The top scientific body began to work against a possible outbreak years before the coronavirus pandemic and invested TL 2.3 billion ($300 million) for the development of 16 vaccines and other medicines over the past five years in Turkey.

After the meeting with Varank, Güzel stated that the project was carried out with the collaboration of the industry and universities. "We have developed a product with our local capabilities,” Güzel said, expressing his hopes for further projects.

Güzel added that favipiravir is one of the three to four medicines that has been effectively used in coronavirus treatment around the world.

Another head of the developer team, Zeynep Atabay Taşkent, said that TÜBITAK’s support was important in developing the drug in such a short time.

A statement by the Industry and Technology Ministry said that favipiravir is just another “success story” after domestic medical ventilators made by four Turkish companies. Turkish tech firm Biosys had developed the respirator, and after the pandemic hit, Turkish firms mobilized to start mass production with the coordination of the Technology and Industry Ministry. Turkish engineers managed to set up mass production of the first indigenous intensive care ventilator in just 14 days.

President Recep Tayyip Erdoğan announced earlier this week that Turkey will locally develop and produce favipiravir. Turkish scientists were able to synthesize the drug's active ingredient, and it will be available for coronavirus treatment after the registration process is completed, he added.

Health Minister Fahrettin Koca said Thursday that Turkey’s daily COVID-19 death toll stands at 17 while new infections remained below 1,000 in the past 24 hours. The number of COVID-19 tests in the country surpassed 2.5 million, as the number of confirmed cases reached 174,023 with 147,860 recoveries.