Turkey's health care workers complain of violence against them 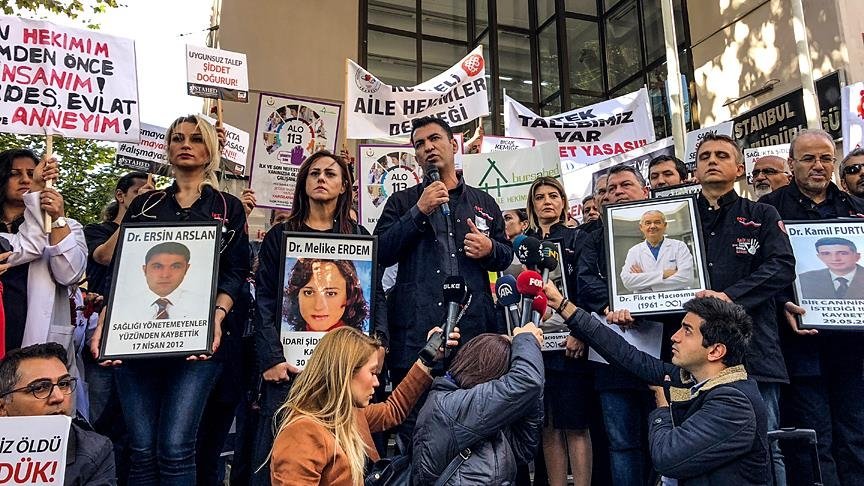 A new report by a labor union of health care workers shows that the sector is still experiencing cases of violence despite being on the front lines fighting the coronavirus pandemic.

In November, five doctors, six members of contact-tracing crews set up for the pandemic, four nurses, a hospital security guard and 15 people working in different medical branches were subject to violence. The report by the Union of Health Care and Social Service Workers (Sağlık-Sen) published on Wednesday says the violence remains a social problem.

The union called for a change in people’s mindset toward health care workers in order to end the violence. Doctors and nurses often face harassment either by patients or relatives of patients claiming they were mistreated or neglected. In some cases, perpetrators try to force their way into areas in hospitals and clinics closed to visitors for patients’ well-being and, when stopped, resort to violence.

This worrying trend made headlines again last month when a group of health care workers was caught on camera barricading themselves in a surgery room when relatives of a patient argued with hospital staff and tried to force their way inside at Cebeci hospital in the capital Ankara.

“Such incidents are becoming increasingly common,” the union noted in the report. The report says in 11 out of 16 cases of violence, health care workers suffered from both physical violence and verbal harassment, while in four cases, they were subject to verbal harassment only. In another case, they were subject to harassment just short of an all-out attack. The report shows perpetrators in six cases were patients, and in another four cases, the relatives or friends of patients carried out the harassment. “In all incidents in November, 11 perpetrators were questioned by police and then released while no criminal proceedings were carried out on 10 suspects. Only six perpetrators were arrested,” the report says.

Violence often takes place at hospitals, but contact tracing crews, formed to detect people who have come into contact with COVID-19 patients, have also reported a rise in violence and harassment. The crews work long shifts going door-to-door carrying out tests, and complain that some people refuse to be tested, which leads to arguments. They also face harassment when they try to warn people to adhere to COVID-19 safety measures.

The Sağlık-Sen report says courts handled the cases of violence well, citing court decisions issued last month for past cases. A patient and his relative were fined TL 6,080 ($777) in one case when both insulted a doctor at a clinic, while another relative of a patient who insulted and threatened a doctor refusing to prescribe a drug he demanded in the southern province of Kahramanmaraş was fined TL 5,660.

The union’s president Semih Durmuş said in a written statement that the violence was now taking place outside hospitals too. “Health care workers in the field face attacks and threats to their lives. We are issuing monthly reports and trying to raise awareness, but unfortunately, the change is not here. Only perpetrators and crime scenes change. We need concrete policies to prevent it. We should not allow anyone to get away with it. People should be more conscious of the issue,” he said.