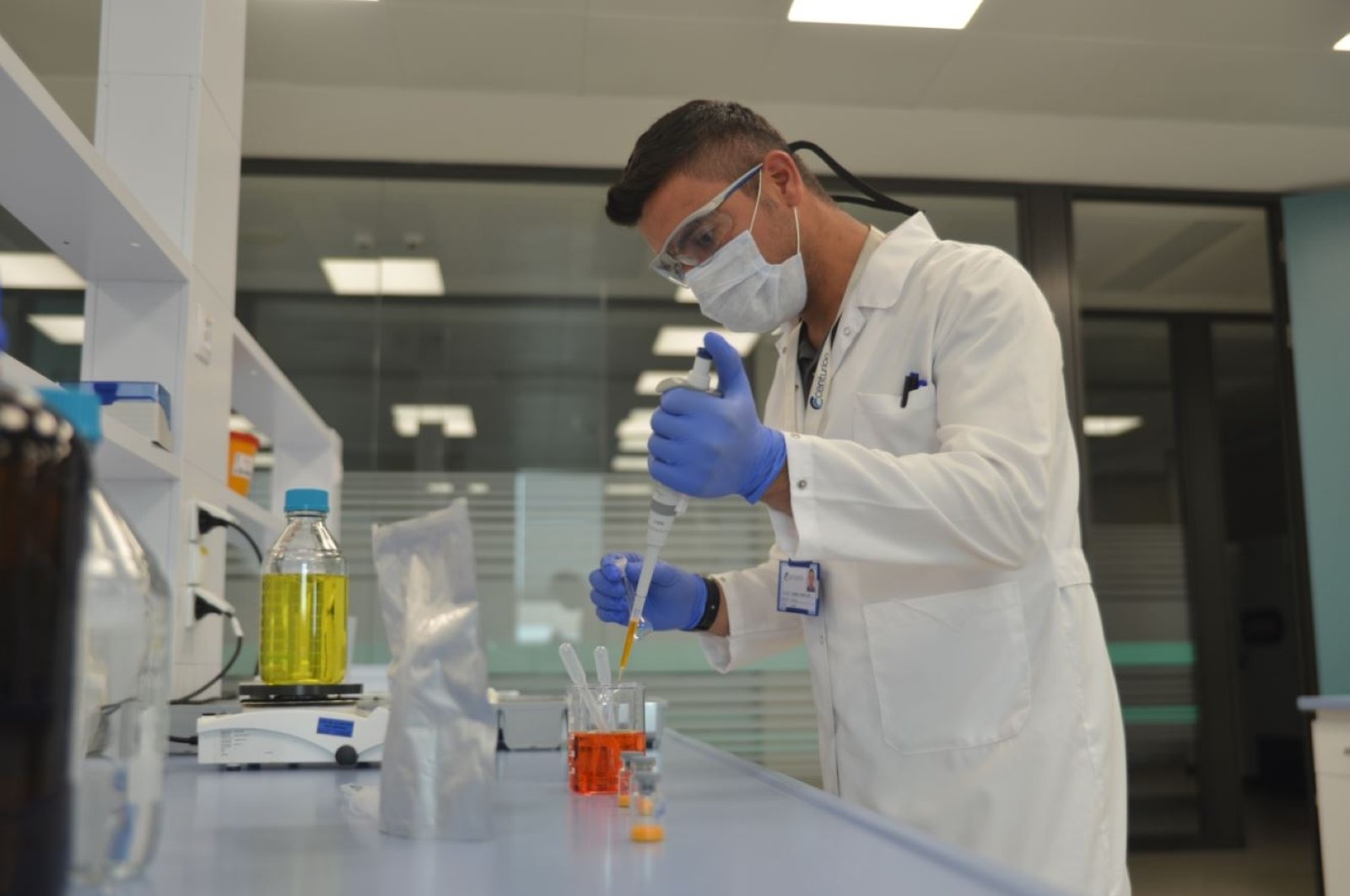 As Turkey speeds up efforts to develop vaccines and drugs to treat coronavirus infections, a pharmaceutical company in the capital Ankara announced that they expect to complete Phase 2 and Phase 3 trials for a drug in three months. The medication, derived from the CNT002 molecule, will be the latest addition to an expanding inventory of local initiatives in the fight against the outbreak.

Mustafa Ersin Erfa, CEO of the company, said the drugs could be exported as well once they are approved.

A team of 75 researchers is taking part in the production of the medication developed in cooperation with three universities. In one month, human trials will start with about 100 volunteers. The company says it is capable of producing 25 million doses of medication yearly.

Erfa told Demirören News Agency (DHA) on Friday that they already produce generic drugs used in the treatment of COVID-19 and efforts to develop their own medication were initiated in March when the first cases were reported in the country. “We are working on a molecule with the ability to treat lung symptoms caused by the virus,” he said. He said the medication repairs damage to the lungs and shortens the treatment process. “We also applied for patenting CNT002 molecule,” he noted.

Based on the course of studies, a locally made vaccine will be available in the second quarter of 2021 when the country plans to produce 50 million doses monthly. The government is endorsing 31 vaccine and drug projects, and among them are two vaccines developed by Erciyes University in the central province of Kayseri and by the private company Koçak Farma. All three are set to switch to human trials by the end of this month, according to officials who say groups of healthy volunteers, consisting of 20 to 80 people, will be injected in the first stage. In the meantime, human trials of a Chinese-made vaccine continue across Turkey.

Turkey had recorded 58 deaths and 1,615 new coronavirus patients over the past day, the Health Ministry announced Thursday. According to Health Ministry data, more than 117,000 coronavirus tests were carried out across the country in the past 24 hours. Turkey has conducted more than 11 million COVID-19 tests since the outbreak’s start in the country. With Thursday’s numbers, Turkey’s total death toll from COVID-19 rose to 8,667, while the total number of patients stood at 330,753. Meanwhile, the number of recoveries also increased to 290,352 with 1,398 patients declared healthy.

Health Minister Fahrettin Koca said Friday that Turkey managed to “slow down the outbreak” in the past few weeks with tight inspections for compliance with rules against the pandemic and fast intervention. Koca was speaking in the southern province of Adana, his latest stopover in the weekly nationwide tours to observe the situation in the field. The minister said Adana – which has a population of more than 2.2 million people – was one of the most densely populated provinces in Turkey. He added that a recently opened city hospital brought an additional capacity to health care in the province at the time of the pandemic.

“Turkey has seen an aggravated (trend) in the coronavirus outbreak we have been fighting since March. We saw an increase in the number of patients, though they were not the same in each province. We saw undesired rises in some places, and we took urgent actions to reverse the trend. In other places, public vigilance and concrete measures prevented a rise in the numbers,” he told reporters.

Koca hailed the “good progress” in terms of the number of patients and the burden on the health care sector but warned it does not mean Turkey should drop its guard amid the outbreak. “Our fight is only stronger with the attention of the public to the rules,” he emphasized.

Speaking on trends specific to the regions, Koca said hospitals in central and eastern regions have seen “busy weeks” and in Adana, the outbreak peaked last month. “Our response helped control the outbreak and in the past two weeks, the number of cases decreased by one-third. We have also seen a drop in the number of patients visiting COVID-19 clinics here,” he said. Koca, however, warned that the majority of patients were elderly citizens and called on the public “to be more careful to protect our senior citizens against infection.”

“We will be successful as long as we isolate people early. Turkey is one of the best countries in the world in terms of contact tracing. In Adana alone, 228 contact tracing crews composed of three people work now,” Koca also stated.