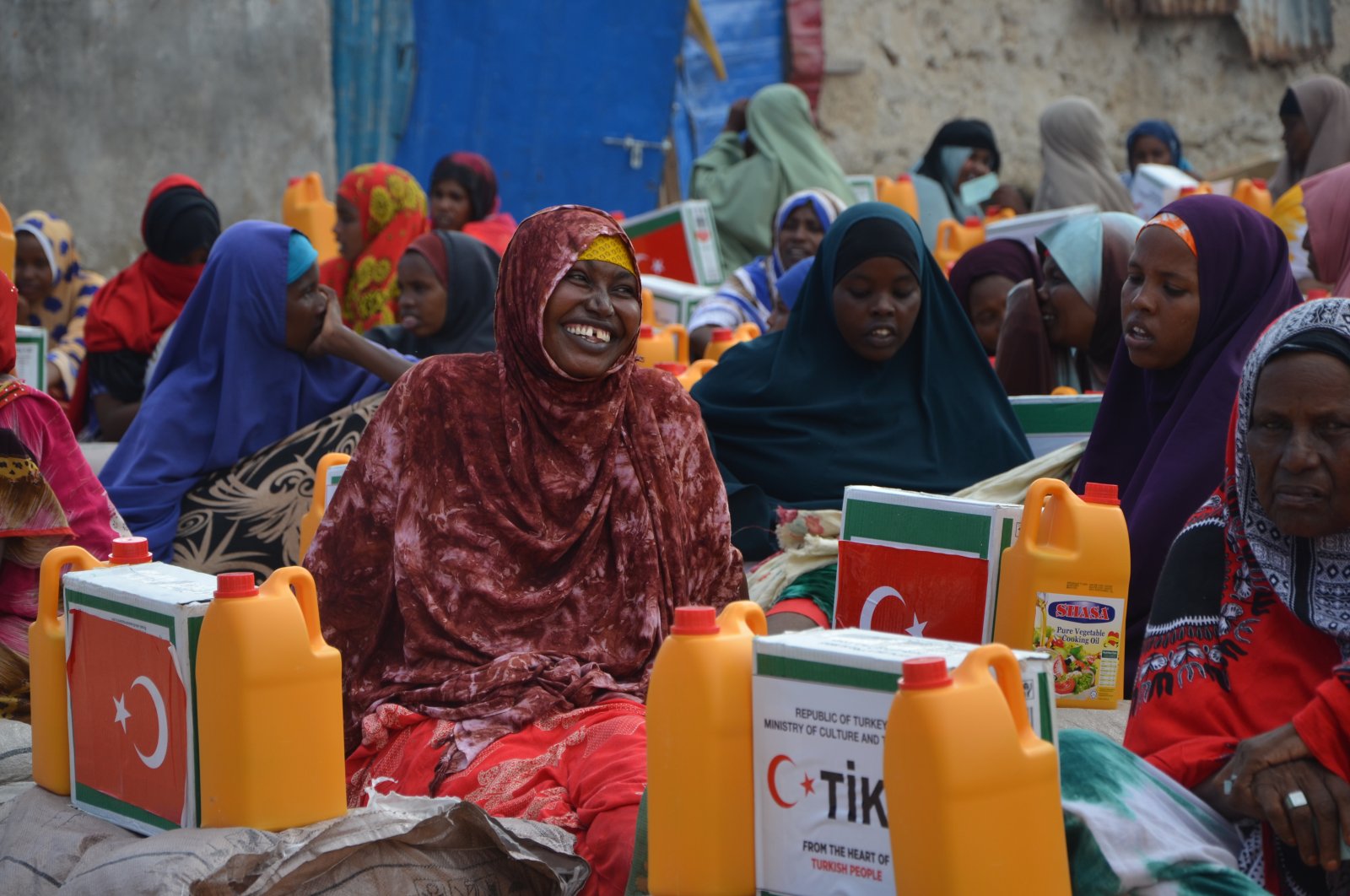 Families living in the Garasbaaley region of Somalia's capital Mogadishu receive aid supplies from the Turkish Cooperation and Coordination Agency (TİKA), May 12, 2020. (AA Photo)
by Anadolu Agency May 13, 2020 9:30 am
Edited By Can Kazancıoğlu
RECOMMENDED

The Turkish Cooperation and Coordination Agency (TİKA) has helped 500 families who had to leave their homes in Somalia's capital Mogadishu to live in camps in the Garasbaaley region to the west.

TİKA distributed food packages including rice, flour, pasta, sugar and oil to the families as part of its 2020 Ramadan Program, which refers to the Muslim holy fasting month.

The Somali families who benefited from the aid thanked Turkey, the Turkish people and TİKA.

In Somalia, which has been largely affected by the novel coronavirus outbreak, most of the population works for daily wages. This economic situation makes it harder to apply restrictions in the country to stem the spread of the virus.

As of Sunday, the country had confirmed 57 new coronavirus cases, bringing the tally to 1,054. The death toll in Somalia stood at 51, with 118 recoveries.

The agency also supplied the Red Crescent Society of Djibouti with protective equipment and hygiene kits against the outbreak, which has claimed thousands of lives worldwide.

Speaking at the delivery ceremony for the materials, TİKA Program Coordinator Kutluhan Yücel said, "Turkey is determined to stand with Djibouti through these challenging days."

Noting that the project is part of the aid program that TİKA carries out all around the world, Yücel added that the "Red Crescent Society of Djibouti is absolutely not alone in its fight against the COVID-19 outbreak."

Abdi Ibrahim Farah, head of the Red Crescent Society of Djibouti, thanked TİKA and Turkey for the meaningful aid that came during the crisis.

"Last April, we received some aid from Turkey. This second aid from TİKA is a large contribution to the needs of the Red Crescent," he said, adding that such aid further strengthens bilateral ties.

The agency has geared up its activities worldwide. Last week, 70 tons of food was provided to Rohingya refugees in Bangladeshi camps. The refugees thanked Turkey and President Recep Tayyip Erdoğan for the help. It also distributed food packages to 600 families in Pakistan's northeastern Punjab and northwestern Khyber Pakhtunkhwa provinces.

TİKA has been Turkey's flagship international development aid agency since its inception. It is known for extending a helping hand to countries on every continent with a diverse array of projects, including vocational training, agricultural support, health services and infrastructure. It represents a significant arm of Turkey's multilayered humanitarian foreign policy and showcases solidarity with countries it previously maintained low-profile ties.