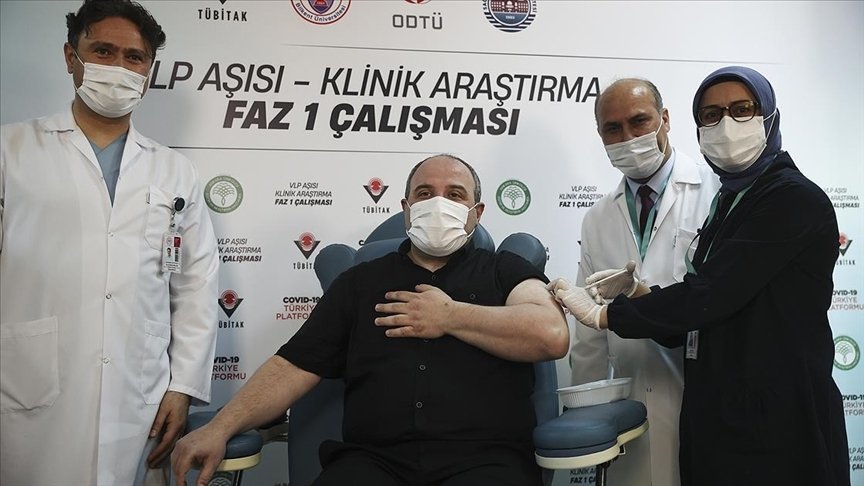 Minister of Industry and Technology Mustafa Varank injected with VLP vaccine as a volunteer, in the capital Ankara, Turkey, April 14, 2021. (AA PHOTO)
by DAILY SABAH May 28, 2021 2:27 pm
RECOMMENDED

Suspect confesses to arson as wildfire rages in southwestern Turkey

An innovative vaccine developed by Turkish scientists against the coronavirus is set to start Phase 2 trials, Industry and Technology Minister Mustafa Varank announced Friday. Varank, himself a volunteer in the vaccine trial, said at least 480 new volunteers were needed for the next phase of the virus-like particle (VLP) vaccine.

The jab has been developed as part of the COVID-19 Turkey Platform, an initiative coordinated by the Scientific and Technological Research Council of Turkey (TÜBITAK) that includes vaccine and medicine studies against the deadly disease.

VLP vaccine is developed by a team of researchers led by professor Mayda Gürsel and her husband Ihsan Gürsel, two renowned scientists from Middle East Technical University (METU) and Bilkent University in the capital Ankara respectively. Thirty-eight volunteers were injected with jabs in the first phase of the study. Scientists say the vaccine is developed to be effective against both the original coronavirus that emerged in China’s Wuhan and its British variant which took hold in most of the world, including Turkey. Phase 3 trials are expected to be conducted with more than 10,000 volunteers in dozens of centers across the country if Phase II succeeds.

The vaccine is one of its kind for Turkey where scientists race against time to develop inactive, adenovirus and other types of vaccines against coronavirus. It was the fourth vaccine to be included in a list of World Health Organization (WHO) for vaccine candidates on March 30. VLP vaccine works by mimicking the coronavirus, in a way not to cause infection. Currently, there are four VLP vaccine candidates in the world. The Turkish jab differs from others by using virus’s four structural proteins as a vaccine antigen, according to scientists.

Turkey has administered more than 28 million doses of vaccine to its citizens since January 2021 and currently relies on China’s CoronaVac and a Pfizer-BioNTech vaccine. It also aims to import Russia’s Sputnik V vaccine soon. Elsewhere, scientists work on seven vaccine candidates across the country while a jab developed by Erciyes University, an inactive vaccine, appears closer to completing its trials. Authorities have earlier said a locally made vaccine would be available by the end of 2021.

Suspect confesses to arson as wildfire rages in southwestern Turkey