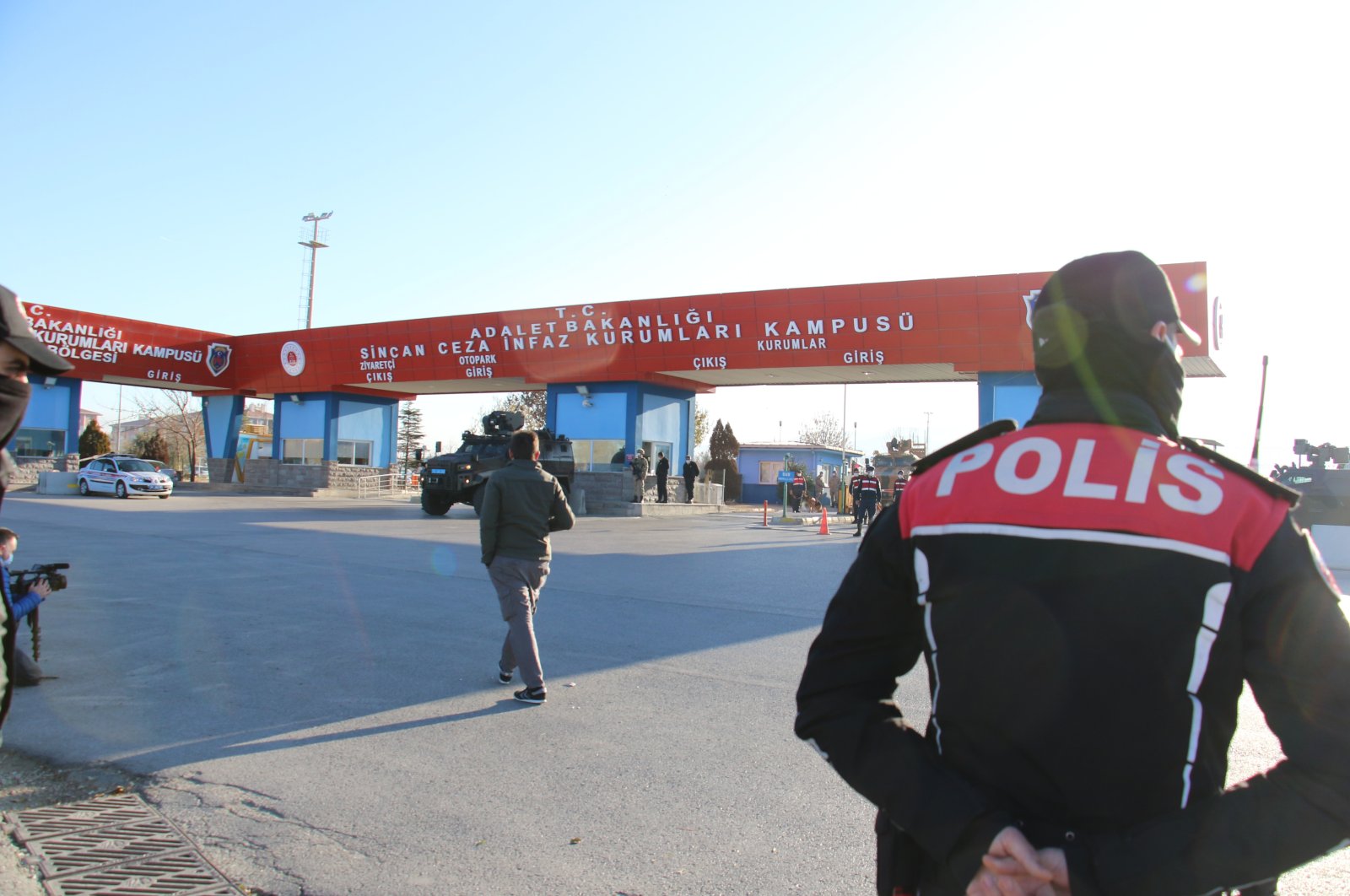 A court in the capital Ankara handed down aggravated life imprisonment for 310 military officers and civilians who were involved in the FETÖ terrorist group's 2016 coup attempt, at a trial on Thursday on the putschists' actions at Akıncı Air Base

A Turkish court in the capital Ankara on Thursday handed down aggravated life imprisonment for 310 defendants in one of the biggest trials on the Gülenist Terror Group's (FETÖ) coup attempt on July 15, 2016.

Fifteen military officers and four civilians were handed down 79 instances of aggravated life imprisonment and an additional prison term of 3,901 years in the Akıncı trial, named after the air base in the capital where the putschists coordinated the coup bid.

Four other defendants who remain at large will be tried in a separate trial. FETÖ leader Fetullah Gülen and coup mastermind Adil Öksüz will also have a separate trial as both remain fugitives from justice.

The 475 defendants have been on trial since August 2017, and 365 of them have been in pretrial detention.

Akıncı air base is viewed as the command center of the coup attempt that killed 251 people and injured nearly 2,200 others. Top military brass, including then-Chief of General Staff Hulusi Akar, was held hostage at the air base throughout the night of the coup attempt.

The trial was held in one of the largest courtrooms in the country specifically built for coup trials inside a maximum-security prison complex in the Sincan district of Ankara.

Defendants were charged with a long list of crimes, from murder and attempt to violate the constitutional order to an assassination attempt targeting President Recep Tayyip Erdoğan. According to the indictment, defendants orchestrated a major part of the coup attempt from the base, including dispatching fighter jets to bomb state buildings. It was from Akıncı where F-16 warplanes took off and dropped bombs on Parliament, the headquarters of the Special Operations police unit in the Gölbaşı district and the Ankara Police Department. Jets also struck an area near the Presidential Complex where a large crowd had gathered to defend against an invasion by the putschists. The defendants are also accused of involvement in the killing of 77 people, including 68 who died in bombings and nine that were shot dead as they tried, in a heroic attempt, to force their way into the base to stop the putschists.

Among those sentenced to aggravated life imprisonment were Müslim Macit, a fighter jet pilot responsible for the killings of 15 people in an airstrike near the presidential complex, and Mustafa Mete Kaygusuz, who gave instructions to pilots on places to be bombed. Bekir Ercan Van, a general who organized the fueling of the planes from İncirlik Air Base, was also sentenced to aggravated life imprisonment.

Öksüz, originally a university lecturer, was a handler for the terrorist group’s infiltrators in the military. He was captured at the base after the attempt was quelled. Few people were aware of his role in the coup attempt when he was captured, and Öksüz had claimed he was near Akıncı base “to check a plot of land he sought to purchase” when he was captured. Öksüz was released by the court and later he disappeared. He is believed to be in hiding in Germany, according to media reports, though that information was never verified.

Prosecutors say that after months of preparations, Öksüz; along with other “civilians” in the case, including Kemal Batmaz, Hakan Çiçek, Nurettin Oruç and Harun Biniş; arrived at the base to coordinate the coup attempt. Akıncı Air Base commander Brig. Gen. Hakan Evrim helped Öksüz and others at the base. Fighter planes at the base were loaded with ammunition under the pretext of a counterterrorism operation one day before the coup attempt, the indictment says. The planes started bomb attacks at 11:18 p.m. on July 15, 2016, first targeting the aviation department of the Turkish National Police in Ankara’s Gölbaşı district, killing seven police officers. Another attack targeted the special operations unit’s headquarters, killing 44 police officers. More attacks followed after midnight, including one on the Ankara branch of the police department and Parliament. Then, on the morning of July 16, an airstrike hit the crowd near the Presidential Complex, killing 15 people.

Families of victims of the putschists were among those who convened outside the courthouse as the trial got underway, and they hailed the verdicts. Leyla Şahin Usta, deputy chairperson of the ruling Justice and Development Party (AK Party), was among those who watched the hearing. Usta was at Parliament when the putschists bombed it, along with a number of lawmakers from her party and the opposition parties. They rushed into Parliament to read an anti-coup declaration. “The accused were already tried and sentenced in the public conscience. We are glad that they were duly punished today,” she told reporters outside the courtroom after the verdicts were announced. “The era of coups in Turkey is over,” she added.

Birgül Biçinci was 16 years old when she joined her father in resisting the coup attempt. She was injured and her father was killed when putschists opened fire on a crowd gathered outside the base on July 15, 2016. She was among those following the trial. “I wish all of them would be sentenced to life,” she told Ihlas News Agency (IHA) after the verdicts were issued. “I am still fine with the sentences they were handed. Just like my father will not come back, they should not be able to leave prison for life,” she said.

The Akıncı trial has been one of the largest and longest trials of the coup attempt. Some 515 hearings were held, and 385 eyewitnesses and 440 plaintiffs were heard throughout the trial. Prosecutors had prepared a 4,658-page indictment for the trial against the defendants who held almost every rank in the military, from generals and lieutenants to noncommissioned officers. They had asked for 79 instances of aggravated life imprisonment for civilian defendants in the case and 16 military officers. They also asked for additional prison terms for those 16 officers. The prosecutors had requested one instance of aggravated life imprisonment for 355 defendants, acquittal of 71 defendants and lesser prison terms for the remaining defendants. Despite clear evidence, most defendants denied the accusations. Civilian defendants claimed they were at the Akıncı base “by coincidence” while military officers claimed they did not take part in the attempt despite being caught red-handed on security camera footage at the base. Some claimed they thought they were taking part in a counterterrorism operation.

The coup attempt was a rare instance of people without military background organizing military officers to overthrow the government, unlike previous coups in the country which were almost exclusively planned and carried out by the military officers. Öksüz is viewed as the “civilian” leader of the coup attempt while Gen. Akın Öztürk, former head of the Turkish Air Forces, was accused of being the military leader of the attempt. Öztürk was sentenced to multiple instances of aggravated lifetime imprisonment in another trial on the coup attempt last year.

Öksüz is referred to as FETÖ’s “black box” for his intricate ties to senior cadres and prominent role in the coup attempt and faces life sentences in several other coup-related trials as well. A colonel who was detained after the coup attempt had revealed the details about Öksüz’s role in the attempt. The colonel had told investigators that Öksüz and military officers of so-called “Peace At Home Council” which organized the putschist bid plotted the attempt in a villa in Ankara. “Öksüz told us that Gülen instructed the generals, FETÖ’s infiltrators in the military, to convince Hulusi Akar to join the coup,” Hakan Bıyık told a court during a hearing in a coup trial a few years ago. According to Bıyık, Gülen told Öksüz that “(Akar) would be put into retirement this summer.” Indeed, several generals were expected to be retired by The Supreme Military Council (YAŞ) overseeing the army’s appointments in August 2016. “We discussed everything from how to kidnap Erdoğan from his Istanbul residence and then take him to a military ship, to the kidnapping of the prime minister and interior minister using special forces as well as the kidnapping of the intelligence chief,” Bıyık told the court. “Failure was not an option. When we talked about what we would do if the plans were unsuccessful, Öksüz told us not to think the worst,” Bıyık said.

Batmaz, who was caught at the base like Öksüz, was identified as the civilian accompanying the putschist officers in the halls inside the base with some officers giving him a military salute as seen in the security camera footage of the base during the coup attempt. Batmaz has denied that it was him seen in the footage and had claimed that he was near the base to look for a plot of land he wanted to buy, like Öksüz. Batmaz, who once worked as manager of Kaynak Kağıt, a company belonging to FETÖ-run business con•glomerate Kaynak Holding, was seen accompanying Öksüz at Atatürk Airport in Istanbul in a security camera footage as the two returned from the United States two days before the coup attempt. FETÖ leader Fetullah Gülen resides in the U.S. state of Pennsylvania while the group maintains a strong presence throughout the country, owning dozens of businesses.

Biniş, a former executive at a technology company linked to FETÖ, was reportedly among those who attended a meeting with pro-coup officers along with Öksüz in Ankara. Biniş was already implicated in a case for illegal wiretapping of politicians, judiciary members, businesspeople and military officers.

Çiçek, owner of a now-defunct Gülenist private school in Ankara, was also caught at the Akıncı base which he claimed to visit for “an event” on July 15, 2016. Çiçek was accused of serving as a handler for FETÖ infiltrators in the army like Öksüz.

The other civilian defendant Nurettin Oruç, a documentary filmmaker, had claimed he was near the base for shooting a documentary, but investigations showed he worked as a handler for the terrorist group’s military infiltrators.

Tens of thousands of people were arrested or detained following the coup attempt and FETÖ faced heightened scrutiny. A large number of people were also dismissed from their public sector jobs on suspicion of links to FETÖ and face trial. Police still carry out operations almost on a daily basis to capture FETÖ suspects while coup-related trials continue. So far, 279 trials were concluded and 10 others are expected to wrap up soon, including the biggest coup-related trial where 521 defendants are tried for the actions of putschist members of a presidential guard unit. In all coup-related trials so far, more than 2,500 aggravated and standard life sentences have been issued by courts, with judges convicting 4,154 •coup suspects.