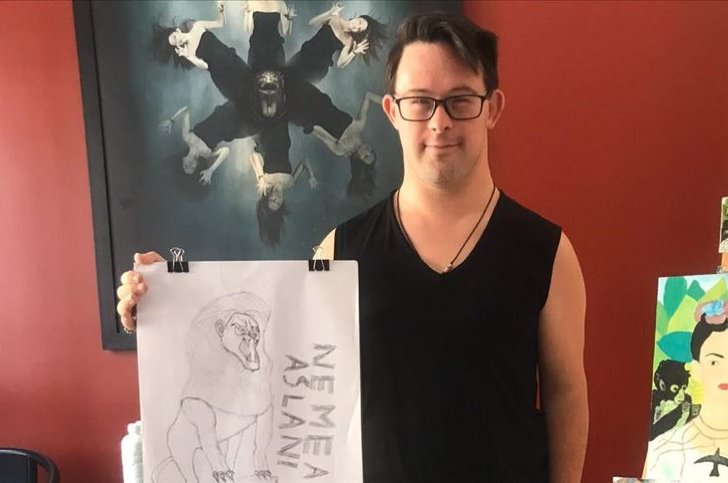 A 35-year-old man with Down syndrome is chasing his childhood dream of visiting the Seven Wonders of the Ancient World. "The Seven Wonders of the Ancient World are irreplaceable for me. I am trying to visit all of them,” said Mustafa Olcaytu Tuncel, who visited the Temple of Artemis at Ephesus in Turkey’s Izmir province, the Great Pyramid of Giza and the Lighthouse of Alexandria in Egypt. "Egypt was my first overseas experience. I went there in 2003,” Tuncel said in interview Anadolu Agency (AA) ahead of World Down Syndrome Day.

He explained how he became a fan of world history and modern art.

"When I was a child, my father brought me to the historic buildings in Ankara. He gave me a list of the historical places in Istanbul and the Seven Wonders of the Ancient World,” he said, recalling his father’s words, which he took as a "duty” after his father died in 2017. His next destination is the Mausoleum at Halicarnassus, located in Turkey's Muğla province. He also plans to travel to Greece to visit the Statue of Zeus at Olympia and the Colossus of Rhodes in the Dodecanese. "I also prepared a list of museums in my mind. I visited the British Museum in London and the Louvre Museum in Paris. Now, my aim is to visit museums in St. Petersburg.” Besides visiting museums and historical places, he also loves buying authentic jewelry and souvenirs. He combines world cultures into his look by wearing a necklace from Nepal, an Egyptian Pharaoh ring and a combination of the Ottoman, Turkish and Seljuk motifs ring.

Tuncel, from the Turkish capital Ankara, has been living alone and doing his all household work without any support from others. "The challenging part of living alone is to learn self-sufficiency in finance and household needs. I believe that I’ve succeeded in it. Working and taking care of myself at the same time is pleasant.”

He also completed his undergraduate degree in business administration from Anadolu University in central Turkey. Stressing that there are few people with Down syndrome who received a university education, he said, "I also obtained another associate’s degree from the same university.” In 2009, Tuncel started working in the library of Turkey’s Parliament in Ankara, but his love for history forced him to get admitted to open university classes on history. "Despite my mother’s objection, I applied to the history department by saying ‘If necessary, I will study until death.’ I am about to complete my third year now.”

Tuncel said sometimes people are surprised to learn that he reads a book per week, highlighting that reading books is one of his favorite pastimes. "I like reading science fiction, adventure and detective novels. My favorite detective novelists are Agatha Christie and Sir Arthur Conan Doyle, who wrote 'Sherlock Holmes.' I also like Edgar Allan Poe’s horror stories.” He is not just a bookworm but also tries hard to write his own novels, especially science fiction. "I am thinking of publishing my novels,” he said. He is looking for publishers to consider his works.

The 35-year-old bachelor has a good social circle in Ankara. He likes to dance and travel to destinations both inside Turkey and across the globe. Salsa is one of his favorite dance forms, and he also performs in plays at the Yol Ufka Theatre in the Tunali Hilmi neighborhood of the Turkish capital, where he is the only member with Down syndrome.

"While writing my novels and stories, I decided to add my fictitious characters into my paintings,” Tuncel said, explaining how his drawing talent was discovered when he was in primary school. "My sister is also good at painting. She and my teachers discovered my talent,” he said, noting that he grabbed everyone’s attention even with his stick man drawings at school. He said he channeled his creativity through his oil paintings and pencil drawings and urged families to encourage their children’s creativity, especially in art. "Children cannot reveal their own capabilities and art talent. In popular culture, children are trapped by the TV.” He is a role model for many people, proving people can make progress in any field with determination and hard work. "I strive for success. I gave countless motivational speeches to people across Turkey on how to become successful and progress more in education," he said, adding his works helped him overcome his obstacles. "My success can inspire hundreds of people with Down syndrome.”