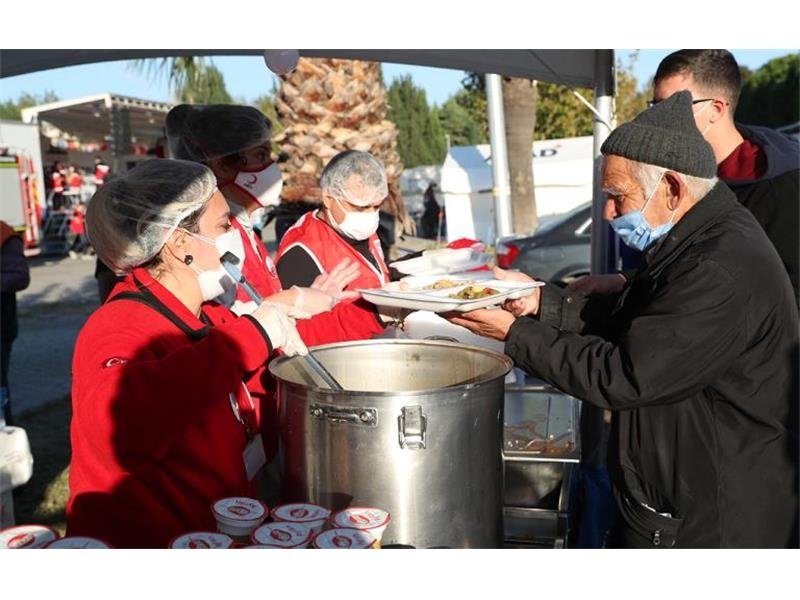 The Turkish Red Crescent (Kızılay), which reached out to the victims of last month's deadly earthquake in the western province of Izmir, will continue their work in the area until the survivors have been moved to the new residences being built for them.

Nearly 300 personnel were deployed by the Red Crescent in the aftermath of the disaster which claimed 116 lives and brought buildings to the ground. The charity provides hot meals and aid materials to those forced to live in tents since their houses have collapsed or are in unlivable condition.

The charity’s president, Dr. Kerem Kınık, told Anadolu Agency (AA) on Sunday that tangible aid is more important for survivors than cash donations. The Turkish Red Crescent set up a crisis desk in Izmir following the 6.6 magnitude earthquake, and volunteers from all across the country were dispatched to the province. The charity has the capacity to deliver meals to at least 60,000 people. Along with aid to help survivors cope with the aftermath, the charity puts an emphasis on the ongoing coronavirus outbreak, with survivors at risk of infection. More than 12,000 hygiene kits, over 144,000 protective masks and thousands of packages of sanitizers were delivered to survivors.

In 51 locations, the charity feeds thousands with its mobile kitchens. Since the earthquake on Oct. 30, it delivered 260,127 food packages to earthquake victims.

The charity's volunteers also offer psychological and social support in order to diminish the impact of the disaster on survivors. Volunteer experts in dealing with trauma have reached out to 1,897 survivors so far, visiting them in their tents to help them cope.

Kınık says their efforts focus on people staying at temporary accommodation venues provided by the Disaster and Emergency Management Authority (AFAD). “We also coordinate logistics of aid materials sent to the region,” Kınık said, adding some 10,000 families also benefited from pre-paid shopping cards to allow them to buy supplies they need at grocery stores.

“The disaster hit a densely populated area. Along with its toll on residents, it affected social and economic life in Izmir. It will take more than one year for people to fully recover from their losses. Until then, their needs should be covered. First, they should be given psychological support so that they would not feel alone. They should be supported until they can safely move in new residences which will be built for them,” he said. The survivors will move into prefabricated housing units from tents this week while the government is set to start construction of new houses soon.