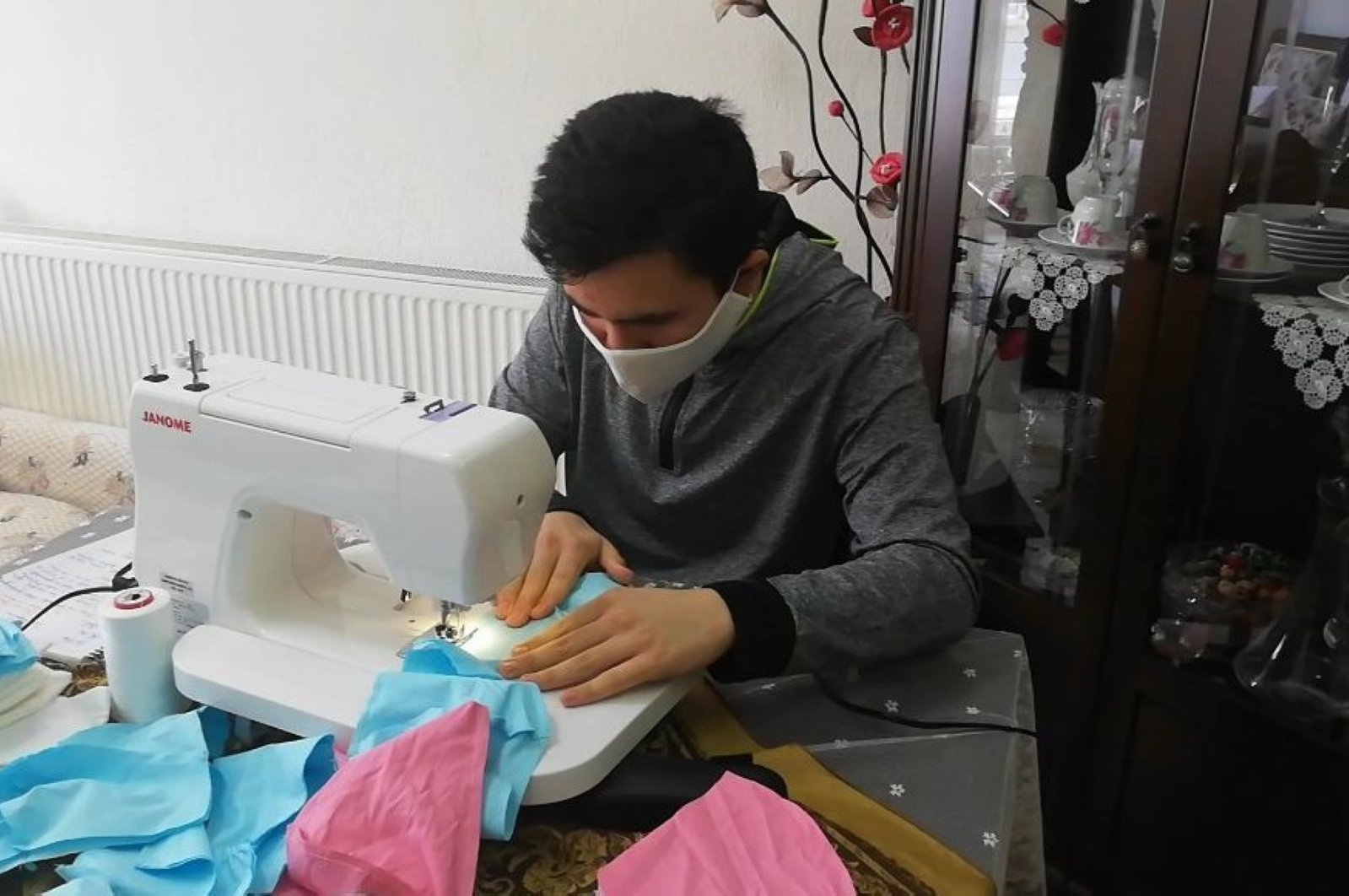 As the demand for face masks and other protective gear skyrockets, countries race to secure supplies for their people and some are even accused of confiscating masks destined for other countries. In Turkey, a different race for masks is underway. Thousands of volunteers all across the country work day and night to produce masks and protective gear for health care workers embattled by the surge in coronavirus cases that have multiplied by almost 1,000 every day since the first case in March.

Turkey recently started delivering free masks to each citizen and authorities assured that there won’t be any shortages, both for citizens and health care workers. Since the outbreak grew, vocational schools, vocational learning centers of local administrations and private companies started producing masks. Skilled people of all ages volunteer to work around the clock in sewing workshops. Some vocational schools and individuals who own 3D printers are also volunteering to produce face shields. In the central city of Konya, for instance, vocational high schools specialized in textile production produce 135,000 masks weekly while instructors and students at the municipality’s lifelong learning course produce 25,000 masks daily. In the Ortahisar district of the Black Sea province of Trabzon, a lifelong learning center produces up to 1,500 masks daily.

Vocational high schools all around Turkey produced 500,000 surgical masks in a single week. They aim to produce 10 million masks in one month. Some schools also produce disinfectants.

This unprecedented voluntary movement, which draws parallels to the Turkish nation’s mobilization for the War of Independence nearly a century ago, also sees donations of thousands of masks by companies.

Mask production is not limited to schools and lifelong learning courses. Imams have also joined the voluntary efforts. Imam Yakup Çalışkan and müezzin Mustafa Mutlu in the central city of Kırşehir borrowed equipment from a local youth center and started building face shields at home. “We heard of the need for face shields for health care workers and decided to help them as much as we can,” Çalışkan said. The two men have made 530 shields so far and want to make more. Mutlu said that along with making face shields, they were visiting the homes of the elderly to deliver aid. In the western city of Afyon, Abdil Semih Ağdacı, a 16-year-old high school student, devotes his free time to sewing masks amid the school closures. Learning how to sew from his mother, Ağdacı makes washable masks with her assistance at home for people in need. “I was spending time at home playing computer games but I thought I should do something in these difficult times,” he told İhlas News Agency (İHA) on Tuesday. Ağdacı has sewn 500 masks so far and will deliver them to poor families in his neighborhood first.

Limited mask supplies have caused diplomatic crises between countries as the coronavirus cases snowballed. Early in March, Czechia had confiscated 110,000 masks which were being sent to Italy from China, though Czech officials later said that there was “a misunderstanding” and masks were eventually sent to Italy. Elsewhere, France has lifted an export ban on a Swedish company delivering masks to Spain and Italy days after their shipment from the company’s warehouses in France was prevented and only after the Swedish government intervened in the issue. French President Emmanuel Macron said last month that reliance on imports to fight the coronavirus has exposed the country's need for "independence" in producing vital medical equipment. "We have to rebuild our national and European sovereignty," he said. Macron promised "full independence" by the end of the year in the production of protective face masks for France, which like most other countries was understocked when the epidemic struck.

Germany has also blocked the shipment of masks to Switzerland amid a presumed shortage for masks in Germany, before releasing them after talks between the two countries’ economy ministers.

In France and Germany, senior officials said the United States was paying far above the market price for medical-grade masks, on occasion winning contracts through higher bids even after European buyers believed a deal was done.

U.S.-listed multinational 3M Co. said last week that the White House had ordered it to stop all shipments to Canada and Latin America of respirators that it manufactures in the U.S., despite what 3M called “significant humanitarian implications.” The company announced on Monday that they reached a deal with the U.S. government to continue exports.

In another case, an order of 200,000 masks bound for Germany was diverted to the U.S., Berlin Secretary of Interior Andreas Geisel said, calling it an "act of modern piracy." In a statement Friday, Geisel said the consignment had been "confiscated" in Bangkok. "Even in times of global crisis you shouldn’t use Wild West methods,” he said, though his office later retracted his remarks.

A U.S. Department of Homeland Security official told Reuters last week that U.S. companies and the government have been paying above market price for much of the gear purchased overseas. The official, who requested anonymity to discuss the matter, said the U.S. would not stop buying "until we have way too much" and could still be searching out protective gear abroad through August.