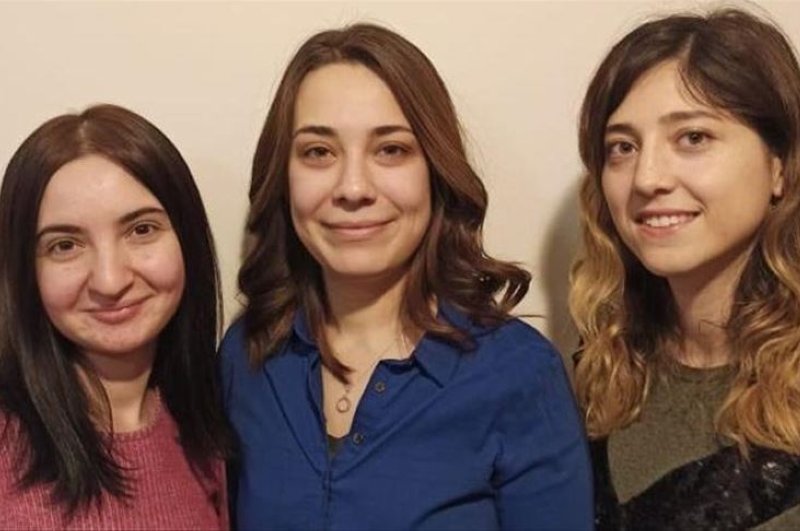 Aysel Karacak, 25, Merve Şahin, 24, and Özlem Arslan, 28, were awarded scholarships under a joint project between Russia's state nuclear corporation Rosatom and Turkey's Ministry of Energy and Natural Resources to start working at the Akkuyu Nuclear Power Plant in the southern port city of Mersin.

The students told Anadolu Agency (AA) about the six and a half years of education they have received, their experiences of being women and minorities in the field and the opportunities the power plant will bring. An intergovernmental agreement was signed between Turkey and Russia in May 2010 for the Akkuyu plant, which will consist of four VVER-1200 power units with a total installed capacity of 4,800 megawatts (MW). The students said they encourage all women to follow their dreams without hesitation, even when people say the job is not suitable for women.

Karacak, who went to Russia to study nuclear power plant design, said she has been receiving her education in Russian and had no idea about the language until she moved there. She said there should be no limitations on professions based on gender, noting she was one of the few women in her field. "We are more successful than many male students here, and I am proud of myself as a woman. I suggest that young girls should not hesitate to come," she said. Karacak said she questioned the lack of a nuclear power plant in Turkey after visits to several nuclear power plants in Russia. Waiting for the day she will start her new job at the Akkuyu plant, Karacak said the country needs nuclear energy and she is more than happy to play a role in bringing it to Turkey.

Şahin, who is studying radiation safety at nuclear power plants, said she has been in Russia for five years now. She said nuclear power is a cleaner and more viable form of energy compared to traditional sources. "Fossil fuels used to generate electricity pollute the air, cause health problems and trigger global warming,” she noted. Şahin said it is upsetting that Russia’s Chernobyl Nuclear Power Plant accident in 1986 is the first thing people think of, emphasizing that nowadays, all kinds of security systems have been developed for any accident scenarios. "Do not mind anyone who tells you that physics or nuclear (energy) is not a field for women because a woman beautifies everything she touches," she added.

Arslan, who graduated from the department of nuclear power plant design at the university, said people had warned her because by the time she returns to Turkey, she would be in her 30s and it would be hard for her to start a family. However, she said her parents were supportive and so she came to Russia taking into account all of the difficulties and responsibilities that follow. "The people in Turkey should know that the power plant to be built in Mersin will be built upon the standards of the 21st Century,” she said.

"I realized that this is not an ordinary building. There are multilayered security systems during the process. For example, a reactor cover weighing tons is checked to the finest detail during the production phase. First, it is checked whether there is the smallest gap left in the caps with gamma rays. Then tests are performed using high-frequency soundwaves, and people measure (the caps in) millimeters," she noted. The groundbreaking ceremony for the nuclear power plant was held in 2018, and it is targeted to produce electricity by 2023.

The scholarship program, which started in 2011 for Turkish students to be employed at Akkuyu, had its first graduates in 2018. More than 150 students are continuing their education within the framework of the program in Russia.