Turkey has right to launch all kinds of operations against terror threats when necessary, Erdoğan says 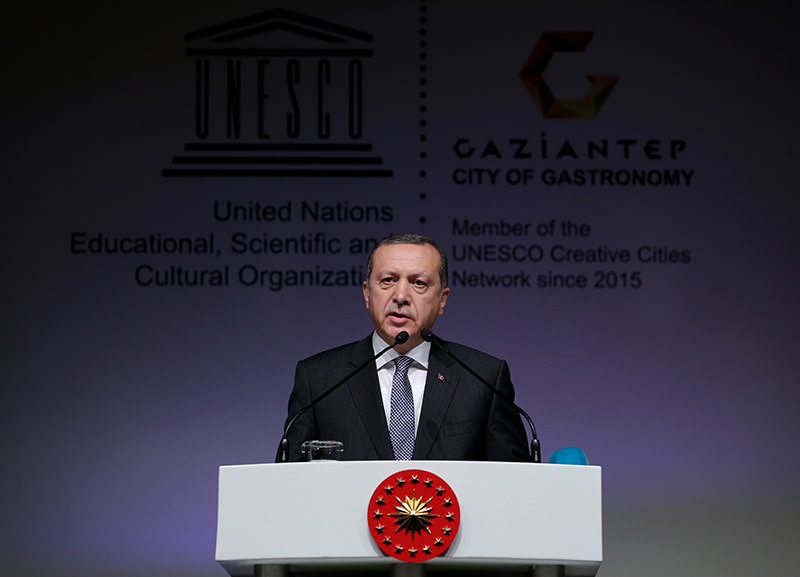 by Daily Sabah with Agencies Feb 20, 2016 12:00 am
President Recep Tayyip Erdoğan said on Saturday that Turkey reserves the right to carry out all kinds of operations at home and abroad against terror threats.

"Turkey will use its right to expand its rules of engagement beyond [responding to] actual attacks against it and to encompass all terror threats, including PYD and Daesh in particular," the president said at a UNESCO meeting in Istanbul.

His remarks came after a suicide bomb attack in the Turkish capital Ankara killed 28 people and wounded 61 others on Feb. 17.

The Turkish government revealed that the Ankara attack was carried out jointly by a PYD/YPG member -- a Syrian national -- and PKK members. The PYD/YPG is the Syrian affiliate of the PKK terrorist organization.

Ankara considers all three groups to be terrorist outfits, while the U.S. designates only the PKK as such and regards the YPG as a "reliable partner" in northern Syria.

In his remarks Saturday, Erdoğan noted: "Nobody can limit Turkey in using its right of self-defense against terror attacks targeting the country.

The president reiterated his country's determination to "eliminate all the attacks targeting its lands, people, and unity, at their source if needed".

Meanwhile, Prime Minister Ahmet Davuoğlu also commented on the Ankara terror attack on Saturday after a meeting in Ankara, saying, "Terrorist groups aim to cause trauma and chaos among the population. We must all assist the security forces."

Davutoğlu also called for public support regarding the new security measures which will be implement in every province based on specific provincial needs, saying, "No security efforts can succeed without the support of the people."

He said the link between PKK and PYD/YPG has been detected in the Ankara bombing and the perpetrator, who was said to be a Syrian national, has been identified from his fingerprints taken when he entered the country.

Thousands of PKK terrorists have been killed in operations across Turkey and northern Iraq since the PKK resumed its 30-year armed campaign against the Turkish state in late July.

Turkey is also a part of the U.S.-led coalition fighting against Daesh.

Erdoğan accused perpetrators of terrorism of trying to tarnish Turkey's image. "There are similar problems [terror activities] around the world, especially cities in the western countries," he said.

"Despite the wars raging next to it and despite being a direct target of terror organizations, Turkey is still one of the safest countries in the world."

At least 250,000 people have been killed since the Syria conflict began in 2011, according to UN figures.

The conflict prompted an unprecedented refugee crisis which made Turkey the world's largest refugee-hosting country with nearly 2.7 million Syrian refugees.

Turkey has been targeted by terrorist attacks in recent months.

Ankara was hit by twin suicide bombings on Oct. 10, when 103 people were killed in an attack on protesters gathering outside the city's main train station for a peace rally. The attack was the deadliest in modern Turkish history and has been attributed to Daesh.