Erdoğan urges prosecutors to act after call from HDP's Demirtaş 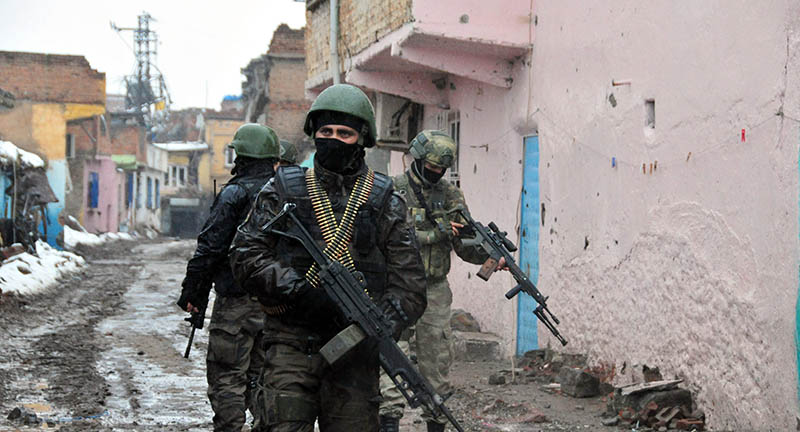 President Recep Tayyip Erdoğan on Wednesday called on prosecutors to bring legal proceedings against Peoples' Democratic Party (HDP) Co-Chair Selahattin Demirtaş after he urged Kurds to break the curfew in Sur district of the southeastern province of Diyarbakır.

Speaking in Nigeria at a joint press conference with Nigerian President Muhammadu Buhari, Erdoğan railed at Demirtaş's call, saying: "I don't believe that the locals and my Kurdish brothers and sisters will say yes to a call that smells like an invitation to terror. The duty of a deputy cannot be calling for crime. I think prosecutors should do their part."

Saying that nobody has the right to spoil public order in Turkey, Erdoğan asserted that Demirtaş is "in distress" because the region "is starting to find itself."

''Demirtaş's statements are clearly provocation'' Ala said, and added that whoever makes such provocation will have to face consequences.

Ala also urged people in the region to avoid giving credence to such provocation and underlined once again that the anti-terror operations will continue until the region is clear and safe.

He noted that the anti-terror operations will proceed wherever there are terrorists and ditches dug by them.

Opposition Nationalist Movement Party (MHP) leader Devlet Bahçeli also made comments regarding Demirtaş's call, saying that the judiciary and parliament should do what is necessary regarding HDP's co-chair.

HDP co-chair Demirtaş had urged people to walk to Diyarbakır's Sur district in efforts to break the curfew.

Diyarbakır governorate said in a statement Wednesday that it is crucial to respect the entry ban to ensure peace and security in the district, as security forces conduct anti-terror operations.

Diyarbakır's Sur district has been under curfew since Dec. 2, 2015 as security forces have been engaged in an all-out counter-terrorism operation in the region against the PKK terrorists.

Security forces provide evacuation assistance for civilians desiring to leave the district due to the ongoing clashes.

The PKK, considered a terrorist organization by Turkey, the U.S. and the EU, resumed its 30-year armed campaign against the country in late July 2015.

The HDP has received criticism for failing to distance itself from the PKK, with its members and senior figures openly pledging support for the terrorists.