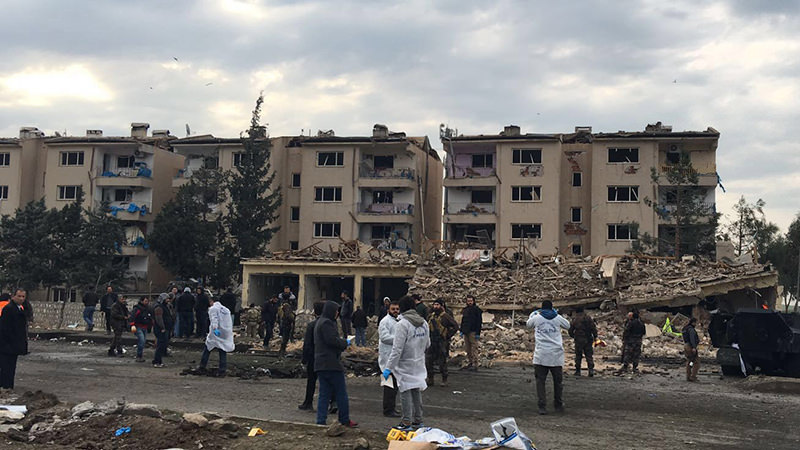 | IHA Photo
by Daily Sabah with AA Mar 04, 2016 12:00 am
At least two police were killed and 35 others wounded in a PKK terrorist attack on a police housing complex in Mardin's Nusaybin district on Friday.   The terrorists carried out the attack with an explosive-laden vehicle, rocket launchers and weapons.   Fire broke out in the police building and housing following the explosion, and serious damage has reportedly taken place.   Ambulances and firefighters have been dispatched to the area. Mardin Governor's Office said in a statement that 35 people, including two civilians, were wounded in the attack.   It added that PKK terrorists attacked the Nusaybin Regional Traffic Station at around 05:45 a.m.   The office also conveyed condolences to the families of the police officers who died in the attack and wished a speedy recovery to the wounded.

The attack came after calls made by the Peoples' Democratic Party (HDP) and its co-chair, Selahattin Demirtaş, to disobey the imposed curfews in several conflict-ridden districts for security reasons. In his call on Thursday, Demirtaş called on the people of Diyarbakır to attend the Friday prayer in the city for "peace" in the region. Furthermore, on Monday, he also made a call for Kurds in the region to march toward the Sur district in which an extensive counter terror operation is ongoing under curfew. Yet, his call found a small response with only a couple of hundred people on the streets on Wednesday.
The HDP has received criticism for failing to distance itself from the PKK with its members and senior figures openly pledging support for the terrorists.

The southeast has been the scene of significant military operations since December against the PKK – designated a terrorist organization by Turkey, the U.S. and the EU – which renewed its terrorist campaign against the Turkish state in July 2015. Since then, more than 280 security forces personnel and thousands of PKK terrorists have been killed in operations across Turkey and Northern Iraq.

A suicide car bombing targeting military buses in Ankara killed 29 people on Feb. 17. Despite a claim of responsibility for the Ankara terror bombing by a hardliner PKK splinter group, the Kurdistan Freedom Hawks (TAK), Turkish authorities insist that the PKK-linked Democratic Union Party (PYD) and its armed wing, the People's Protection Units (YPG), were behind the deadly bombing and assert that claims to the contrary are attempts to divert attention from the Syrian terror group.
Last Update: Mar 04, 2016 3:00 pm
RELATED TOPICS