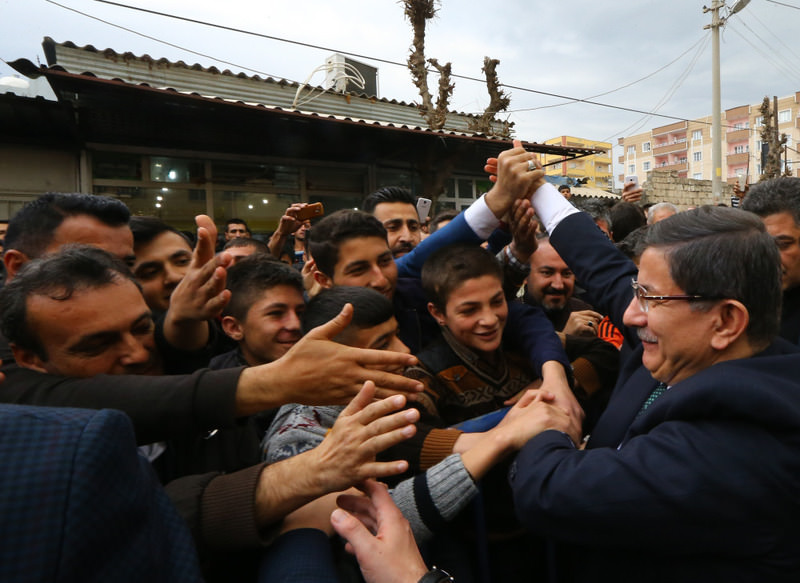 The government is determined to overcome provocations and be prudent concerning the expected forthcoming wave of PKK terror in March, as the terrorist organization calls for insurgencies in the country, Prime Minister Ahmet Davutoğlu said. Speaking to reporters in the Silopi district of the southeastern Şırnak province on Friday, Davutoğlu said that Turkey has the spirit to overcome provocation thanks to inspiration from the Gallipoli War in World War I in 1915, where the Turks and Kurds, with other ethnic groups, shouldered the defense of the country. Davutoğlu was scheduled to fly to Tehran after his stopover in the southeast. He said: "In the forthcoming days, we might encounter several provocative events. March might be critical but the most symbolic day of this month is March 18 [the anniversary of the Battle of Gallipoli] for us."

Previously a senior PKK leader Duran Kalkan threatened Turkey with thousands of last month's Ankara-like bombings and insurgencies in March in an interview with the PKK-linked Fırat News Agency (ANF) on Thursday. He said: "This might be a thousand, not a single one."

He also said that they will continue their fight in the forthcoming process and said: "This March is the process of a large resistance," adding this spring will become the "Kurdish spring."

Following the end of winter, the PKK plans to carry the war to the urban areas in Turkey's southeast, as a "Kurdish spring." Concerning the development, deputies from the pro-Kurdish Peoples' Democratic Party (HDP) have also pointed to the spring of this year as a time that could have heightened violence. HDP Bingöl deputy Hişyar Özsoy previously said: "Everybody is preparing for spring." Former deputy and Democratic Society Congress (DTK) Co-Chair Hatip Dicle asserted in an interview that Turkey may be faced with bloody attacks in metropolises, should counterterror operations in the southeast not conclude by the end of April. "If we cannot stop this war by the end of April, we may be faced with a new and more comprehensive wave of violence involving metropolises," Dicle contended, adding that his words should not be interpreted as a threat.

Davutoğlu said that Turkey is "in a circle of fire." He said they will never let the wars in Syria and Iraq affect the country, and it will do it through the solidarity of people from all around the country.

He said that the buildings that were damaged during the operations were detected and a large reconstruction process will start today.

"We are working comprehensively to relieve the wounds here. It should be known that we are here forever and we are here altogether."

On Friday, Davutoğlu paid an unannounced visit to learn about the completed anti-terror operations in the district. Davutoğlu arrived in Şırnak at 11 a.m. on his private plane. Şırnak Governor Ali İhsan Su and other local officials welcomed him at Şırnak's Şerafettin Elçi Airport. Davutoğlu was scheduled to perform Friday prayers at Silopi's Çarşı Mosque and go to the local district governorship to be briefed on the completed operations. Mehmet Görmez, the head of Turkey's Religious Affairs Directorate, and some Cabinet ministers are accompanying Davutoğlu on his visit. The PKK - listed as a terrorist organization also by the U.S., and the EU - resumed its 30-year armed campaign last July. Since then, more than 280 members of security forces and thousands of PKK terrorists have been killed, according to officials.
RELATED TOPICS