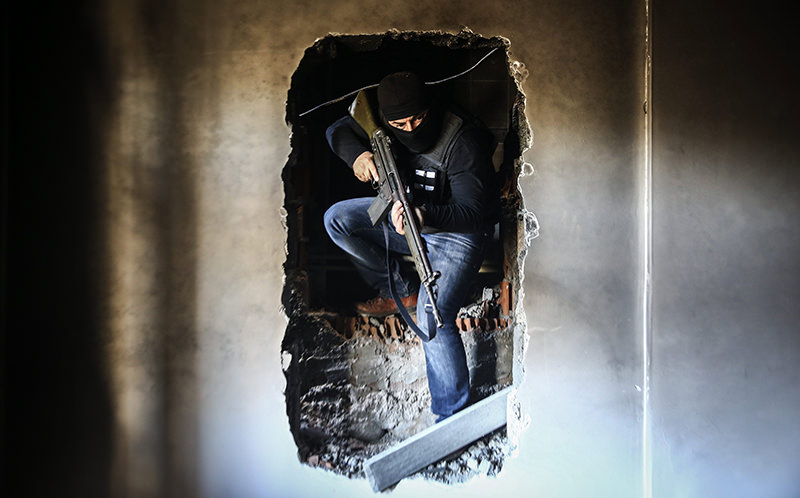 | AA Photo
by Daily Sabah with Agencies Mar 08, 2016 12:00 am
A counter-terrorism operation by Turkish security forces in southeastern district of Idil came to an end Tuesday, a security source said.

In the 20-day operation in the district of Şırnak province resulted in the killing of 114 PKK terrorists and the seizure of weapons including rocket launchers, hand grenades and long-barreled weapons, the source said on condition of anonymity due to restrictions on speaking to the media.

Earlier in the day two police officers were killed in Idil when an explosive placed on the road detonated under their vehicle, security sources said separately. Three police and three soldiers were also wounded in the blast.

A series of operations across southeast Turkey were launched in December 2015 to root out the PKK in urban areas and remove hundreds of barricades and ditches dug by the terrorist group, which renewed its armed campaign against Turkey in July.

The source told an Anadolu Agency reporter in Idil that 19 terrorists were killed Tuesday evening, bringing the operation to an end.

An anti-terrorist operation that was launched in early December is still ongoing in Sur, the ancient neighborhood of Diyarbakır.

The General Staff also made a statement on Tuesday which said that 19 PKK terrorists in Şırnak's İdil district and six in Diyarbakır's Sur district were killed in counter-terror operations.

The statement also noted that the total number of terrorists killed since the start of anti-terror operations in both districts increased to 362.

Turkey has intensified its counterterror operations following the recent attacks carried out by the PKK, which is recognized as a terrorist organization by the U.S., the EU and Turkey.