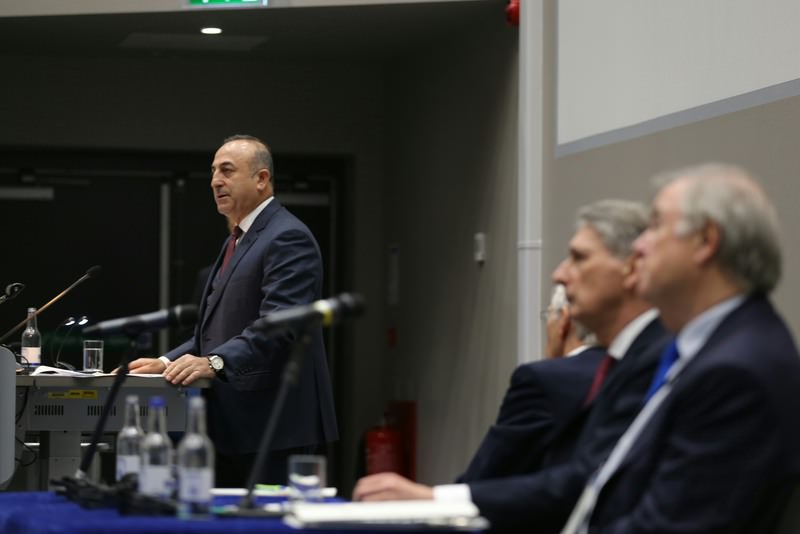 The Syria-based terrorist organization PYD/YPG should never be considered as a reliable partner for defeating Daesh, Turkish foreign minister said at the fifth meeting of the "Turkish-British Tatlidil Forum" in London Saturday.

Turkish Foreign Minister Mevlüt Çacuşoğlu differed from the views of his British counterpart, Philip Hammond, at the forum, who said the PYD needed to be part of the political process in Syria.

"A terrorist organization should never be a reliable partner to defeat another terrorist organization," Çavuşoğlu said, adding: "In this case, my opinion is a little bit different than Philips regarding the PYD. For us, the PYD and the PKK are the same, there is no difference. When you look at the structures of the PYD, you see the PKK terrorist elements".

The Turkish minister also highlighted links of the PYD with the Bashar al-Assad regime and Russia.

"A terrorist organization, which is not radical Islamist should not be [considered] a better one than Daesh or Al Nusra. From time to time, Al Nusra is also fighting Daesh for their interest; therefore, we cannot legitimize any other terrorist organization just because they are fighting others on the ground. Therefore, the PYD should never be a reliable partner to defeat Daesh," he said.

There are several countries in the coalition, including Turkey and the U.K.said Çavuşoğlu and added, " We can - if we have a predetermined, result-oriented strategy - defeat Daesh all together; we do not need other terrorists."

Turkish foreign minister also said Turkey and the U.K. continue to work closely to find a political solution to the conflict in Syria.

"We should put pressure on the regime and Russia to commit to a political process. However, Russia's actions in recent years do not give us reason to be optimistic," he said.

About PYD's military wing, YPG, the British foreign minister said the Syrian group had been an effective military ground force in Syria against Daesh.

"They have mounted operations against Daesh in northwest Syria, and fighting with our partners in northeast Syria. The Kurds in northern Iraq have also been highly effective against Daesh but we should be cautious about the YPG operating outside their traditional areas.

"We should be more cautious still because of the reports of the YPG in northwest Syria cooperating [with] the Syrian regime in attacks on moderate opposition groups who are committed to negotiations in Geneva," Hammond said.

But, while he said Syria's territorial integrity is a nonnegotiable issue for the U.K.; he said: "PYD should be involved in political process in Syria".

"The answer cannot be an independent Kurdish state carved out of Syria's territory; however, the reality is Kurdish groups like the PYD, political wing of YPG, will need to be part of the political process in Syria," Hammond said.

He also acknowledged that Turkey had paid a heavy price in the Syria conflict and praised the country's generosity in hosting millions of refugees.

He noted that Turkey played a "critical role" in stemming the flow of foreign fighters travelling to join Daesh terrorist organization.

"We cannot allow northern Syria to become a launch pad for