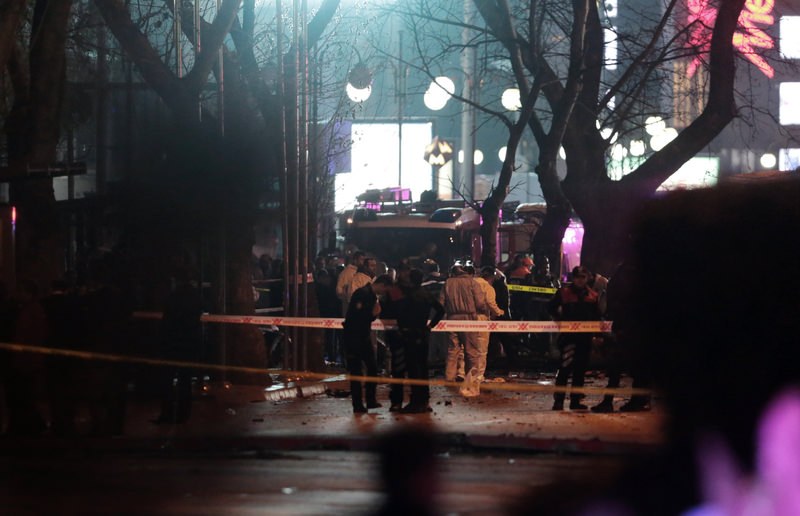 The bomb attack in Turkey's capital Ankara which killed 37 people on Sunday was condemned by many countries and world leaders, releasing messages of condolences and expressing solidarity with the Turkish nation.

The United States also condemned the attack, with a statement by the State Department Spokesperson John Kirby.

"The United States strongly condemns today's terrorist attack in the Kizilay district of Ankara, Turkey," Kirby said in the statement.

"We extend our deepest condolences to the families of those killed, and we wish a quick recovery to those injured. We reaffirm our strong partnership with our NATO Ally Turkey in combatting the shared threat of terrorism," he added.

"Israel expresses its solidarity with the Turkish people in the war against terrorism and calls on the international community to unite in the fight against terror," the statement concluded.

37 people were killed and 125 others were wounded after a car exploded in Ankara's central Kızılay square at 6.45 p.m. local time (1645 GMT) Sunday evening, Health Minister Mehmet Müezzinoğlu said in a statement.

The blast apparently targeted the area's transportation hub of bus and minibus stops, and the central metro station.

Some vehicles have also been reportedly damaged in the incident.

After the blast, several fire-fighting trucks and ambulances were seen rushing towards the scene. Pedestrians and vehicles were also not allowed into Kızılay Square, while a police helicopter also hovered above.

Speaking after an emergency security meeting, Health Minister Mehmet Müezzinoglu said 125 people were wounded, 19 of them in serious condition. He said that 30 of the fatalities died at the scene, while the other four perished at hospitals.

Interior Minister Efkan Ala said Sunday's attack won't deter country from its fight against terrorism. He confirmed the blast as a car bomb that targeted civilians at a bus stop.

He said authorities have obtained evidence but won't make an announcement on those responsible until the end of the investigation.
Sunday's bombing in Ankara was the 3rd attack that targeted Turkish capital in recent months.

President Recep Tayyip Erdoğan also made a statement after the blast, offering his condolences to Turkish nation. In his statement, the president said Turkey will not give up on its right of self-defense against terror threats and vowed to continue fight terror groups targeting the country.