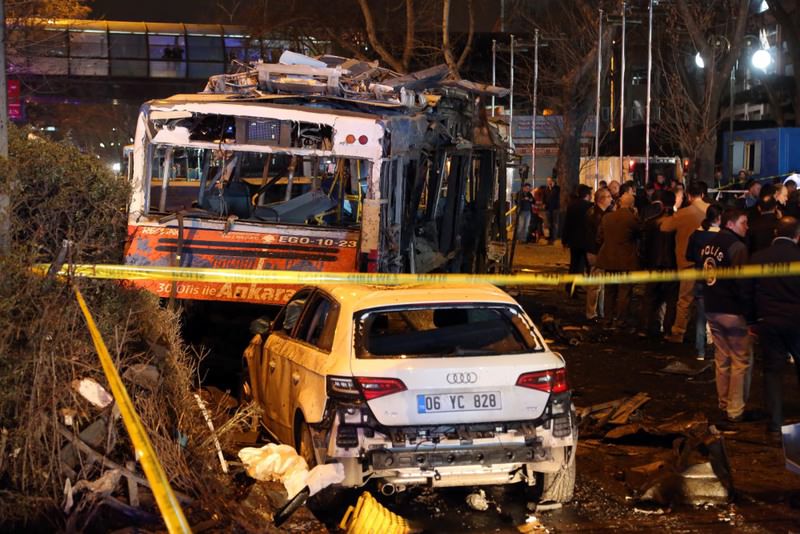 With the Ankara attack on Sunday that left dozens dead and hundreds wounded, PKK leaders' consistent threats to hit Turkey, which started after the previous bombing on Feb 17, are coming to pass

Following a bloody attack in the Turkish capital which left 29 dead and scores injured on Feb. 17, PKK leaders repeatedly threatened to hit Turkey again and in even bloodier fashion. This promise by PKK leaders became a reality on Sunday, again in the capital Ankara, in a bombing that killed at least 37 Turkish citizens and wounded more than 100.

Senior PKK leader Duran Kalkan on Feb. 22 openly uttered threats against the Turkish state and asserted that the bombing attack could be "a thousand, not just one," in the upcoming period. Calling March "the process of a big resistance," Kalkan said this spring would belong to Kurds.

Former deputy and Democratic Society Congress (DTK) Co-Chair Hatip Dicle also hinted at the possibility of big-scale terrorist attacks in metropolises, saying: "If we cannot stop this war by the end of April, we may be faced with a new and more comprehensive wave of violence involving city centers."

Peoples' Democratic Party (HDP) Bingöl deputy Hişyar Özsoy also pointed to the spring as the time when the PKK is preparing to hit with full power. "Everybody is preparing for spring," he said.

HDP mayor for Ağrı, Sırrı Sakık, spoke of a bloody spring time as well. Speaking on Feb. 15, before the two Ankara attacks, Sakık said: "We see that great dangers await these lands in the spring."

There was a bomb attack in Ankara in October 2015 which left more than 100 people dead, before which a senior PKK leader had threatened Turkey. Murat Karayılan had said 13 days before the attack that the PKK would attack city centers.

The PKK is known to have suffered to a great extent from the operations in the southeastern parts of Turkey since mid-December. Around 1,200 PKK terrorists have been reportedly killed so far, while four different districts, where the PKK was previously dominant, have been taken under full control by the Turkish state.

According to recent media reports, the PKK has been readying for a total war in the spring as last resort.

While almost 20,000 security officers are conducting extensive operations in the Nusaybin district of Mardin and the Yüksekova district of Hakkari, which were placed under curfew on Sunday, the government plans to fully cleanse the region of the PKK.

Refusing to return to the reconciliation table unless all terrorists leave the country for good and bury their weapons deep in the ground, the government has pledged to do whatever is necessary in the fight against terror, until the very end.