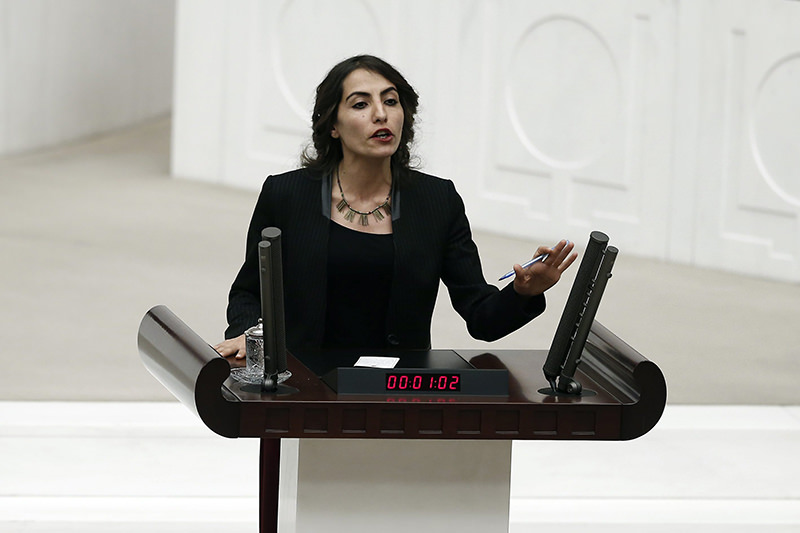 Prosecutors in Van launched a twin investigation into u00d6ztu00fcrk for promoting terrorist propaganda. (AA Photo)
by Daily Sabah with AA Mar 16, 2016 12:00 am

An official request to remove the parliamentary immunity of opposition lawmaker Tuğba Hezer Öztürk was sent to the Turkish parliament on Wednesday, a source in the prime minister's office said.

Prosecutors are seeking to remove the deputy's immunity, which protects lawmakers from prosecution, over a visit she paid to the home of Salih Necar, the terrorist who carried out last month's suicide car bomb attack that killed 29 mostly military personnel in Ankara.

The source, who spoke on condition of anonymity due to restrictions on talking to the media, said the request was sent after Prime Minister Ahmet Davutoğlu's office received a summary of proceedings against Öztürk from the Justice Ministry.

Prosecutors in Van launched a twin investigation into Öztürk for promoting terrorist propaganda and praising a criminal following the visit within days of the Feb. 17 attack.

Last week, similar requests to lift the immunity of five other HDP lawmakers, including the party's two co-leaders, were lodged with the parliament.

If put to a vote, the motion to lift the HDP MPs' immunity requires an absolute majority, i.e. 276 votes.

The move springs from an investigation by the Diyarbakır chief public prosecutor into the speeches of the five deputies on an alleged "declaration of autonomy" during a December meeting of a group affiliated with the party in southeastern Turkey.

Last December, in a meeting in Diyarbakır, Demirtaş had said his party would support calls for the formation of "democratic autonomous regions" in Turkey's southeast.

The prosecutor's office summary was sent last month to the Justice Ministry with a request that the immunity of the HDP deputies be lifted, so they can face charges of "openly instigating people to hatred and hostility" and "being a member of an armed terrorist organization".

Prime Minister Ahmet Davutoğlu had previously broached the idea of lifting the immunity of HDP parliamentarians due to the party's alleged support for terrorism.