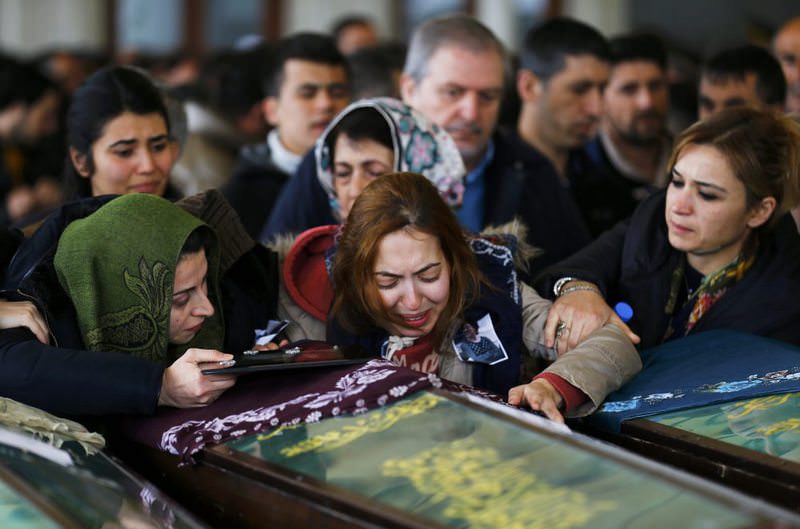 The PKK aims to topple President Erdoğan and the AK Party in the name of democracy by way of bloody attacks across Turkey, senior PKK leader Bayık told The Times four days before the deadly Ankara suicide bombing that claimed the lives of at least 37 people

The PKK terrorist organization's aim is to topple President Recep Tayyip Erdoğan and the Justice and Development Party (AK Party) government through attacks, senior PKK leader Cemil Bayık told the British daily The Times in an interview published on Tuesday.

The interview was conducted four days before the second attack in the capital Ankara that killed at least 37 people. Interior Ministry on Tuesday identified the suicide bomber as 24-year-old Seher Çağla Demir, who had joined the PKK in 2013 and been trained by the YPG in Syria.

Commenting on the counterterror operations in the southeast, Bayık said the PKK is filled with revenge. Bayık also threatened that the war will spread everywhere. "Until not long before, the war with the Turkish army was only in the mountains. Then it spread to towns and provinces. It will be everywhere now," he said, adding that any kind of order given to terrorists would be "legitimate."

Some interpret Bayık's statement as an attempt to whitewash PKK attacks on civilians on the pretext of fighting to topple Erdoğan and the AK Party.

PKK leaders had repeatedly threatened to hit Turkey again and in even bloodier fashion after the attack in Ankara on Feb. 17. There was a deadly attack again in Ankara that killed at least 37 people and wounded more than 100.

Senior PKK leader Duran Kalkan on Feb. 22 threatened the Turkish state and asserted that the bombing attack could be "a thousand, not just one," in the upcoming period.

The PKK is known to have suffered greatly from the operations in the southeast. Around 1,200 PKK terrorists have been reportedly killed so far. According to recent media reports, the PKK has been readying for a total war in the spring as a last resort.

Speaking to Daily Sabah, Melih Altınok, a news show presenter on ATV channel and columnist for the Sabah daily, said the PKK leader's statements are an open confession that the PKK, Democratic Union Party (PYD) and its People's Protection Units (YPG) militia and other affiliated armed groups use weapons and terror as a political tool.

"Turkey cannot take the necessary steps that every state of law would have taken because it has reservations due to the West's two-faced criticism," Altınok said, adding that the PKK and affiliated groups are trying to topple the political power.

Altınok asserted that the West has to adopt a clear attitude on the YPG, which it has provided with weapons; the PKK, which it tolerates and the Peoples' Democratic Party (HDP).

Commenting on the HDP, Altınok said: "Praising a crime, terror or a terrorist is enough reason to close a political party according to the Venice Criteria. However, the HDP, which has become a political extension of the PKK terrorist organization, carries on its activities."

"It is embarrassing that a daily like The Times gave such wide coverage to a PKK leader," Kurtuluş Tayiz, a columnist for the Akşam daily, told Daily Sabah. Asserting that the PKK is trying to deceive the West by using anti-Erdoğan rhetoric, Tayiz said: "They justify their terrorist attacks by claiming that they blow up people for democracy. Why is the West differentiating between the PKK and DAESH? Why is the PKK tolerated? Turkey is being targeted. The people of Turkey are being targeted."

Tayiz said he is having a hard time understanding how a terrorist organization can conduct bombings and kill scores of civilians for democracy. "It is clear that they deem it fit to try every single way after saying that they are doing it for democracy in a country where the president was elected with 52 percent of the vote and the government with nearly 50 percent of the vote," he said.

Saying that he thinks the PKK wants the West and Europe to keep silent over its bloody attacks and say they are trying to oust Erdoğan, an alleged common enemy, Tayiz contended that the West turns a blind eye to PKK terror and creates space for it.

"They publish the statements of a PKK leader. It is called terror propaganda. In what sense is the PKK less of a terrorist organization than DAESH?" he asked.