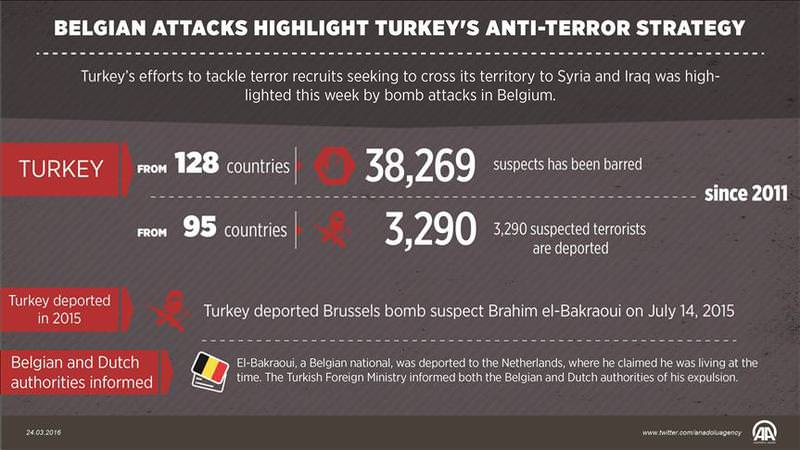 Turkey's efforts to tackle terror recruits seeking to cross its territory to Syria and Iraq was highlighted this week by bomb attacks in Belgium.

A day after the blasts at an airport and metro station in Brussels that killed 31, a Turkish diplomatic source revealed one of the suspected airport bombers had been deported from Turkey after being arrested in July last year near the Syrian border.

Deporting and banning "foreign fighters" heading to join groups such as Daesh is just one of the ways the country has fought terrorism.

Turkey has barred 38,269 suspects from 128 countries since 2011 and deported 3,290 suspected terrorists from 95 nations, including Brussels bomb suspect Brahim el-Bakraoui.

According to a security source that spoke to Anadolu Agency on Thursday, Turkey has made extensive changes to its southern borders since the war in Syria erupted five years ago.

Concrete barriers, wire fencing, additional security lighting and the establishment in 2014 of risk analysis centers to vet suspected terrorists at airports and bus terminals have been the visible signs of Turkey's counter-terrorism drive.

El-Bakraoui, a Belgian national, was deported to the Netherlands, where he claimed he was living at the time. The Turkish Foreign Ministry informed both the Belgian and Dutch authorities of his expulsion.