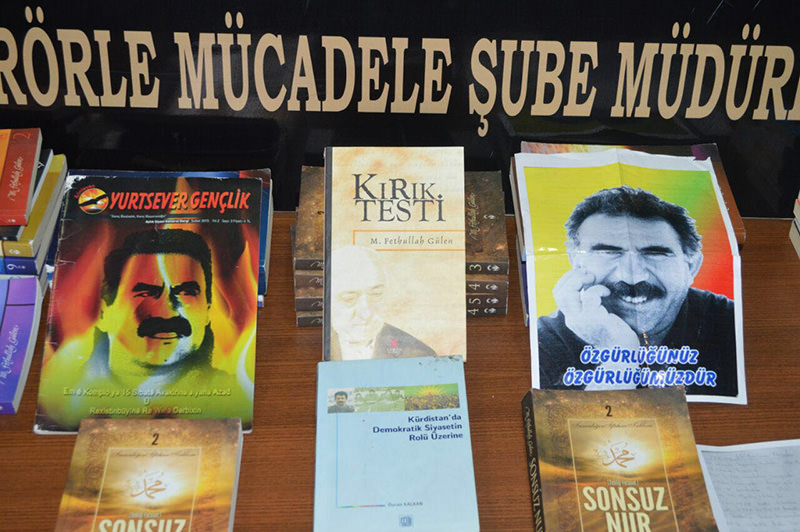 Police units found Wednesday that a PKK courier for high-ranking PKK terrorists was allegedly been hiding in a residence dubbed an "ışık evi" (houses of light) in southeastern Şanlıurfa province by the controversial Gülen Movement, currently subject to ongoing probes on suspicion of forming a terror organization and organized crime body to topple the government.

A statement released by the Şanlıurfa Governorate said police acted on a tip-off that high-ranking terrorist member known by the initials M.E. was going to send a note to other PKK members via another associate identified as H.Ş. in the Kızıltepe district of southeastern Mardin province. H.S. was captured prior to his arrival in the district along with the note, which he was trying to swallow before arrest to prevent it being seized.

The address at which H.Ş. was staying prior to his capture is allegedly a house used by the "parallel structure" Gülenist Terror Organization (FETÖ) linked "ışık evi." The statement said, adding that PKK documents along with books by Fethullah Gülen were found in the house. Five others residing in the house were also detained along with H.Ş. They denied knowing who H.Ş. was, though they were allegedly told to refer to him as "older brother," as in accordance with Gülenist practice.

M.E., a high-ranking PKK figure using the codename "Bahoz" was captured at another address, after H.Ş. was interrogated. The governorate's statement said that M.E. is suspected of being a potential suicide bomber and a PKK recruiter. He was allegedly using couriers to avoid being tracked through other means of communication.

"Işık evi-s" are funded by Gülen Movement-linked institutions or money collected by the movement's supporters. Separated according to gender and run by a "sister" or a "brother" in charge of the house, they are generally occupied by students attending public schools or schools run by Gülen and usually receive scholarships and accommodation from the shadowy movement during their education. They are typically asked for a lifetime of allegiance and services to the movement in return. Regular Islamic prayers and a pious lifestyle are a must at the residences, but they are also indoctrinated with Gülen's teachings and books along with the key texts of the Nur religious order.

These houses form the nucleus of the movement, which is accused of infiltrating state institutions through cheating on nation-wide exams and nepotism, along with charges of terrorism and organized crime involving the judiciary and police operations carried out with fabricated evidence and illegal wiretapping.