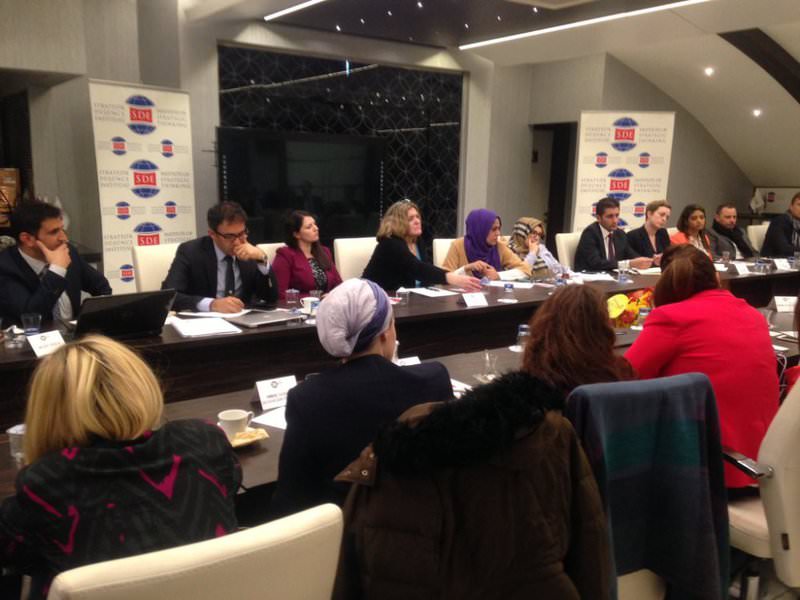 by Merve Aydoğan Apr 12, 2016 12:00 am
The Daily Sabah Centre for Policy Studies began its first Journalism Academy event in Istanbul on Sunday, followed by a panel at the Institute of Strategic Thinking (SDE) in Ankara on Monday under the title "Counterterrorism and the Foreign Terrorist Fighters Phenomenon." The Journalism Academy aims to bring foreign journalists from around the world to Turkey to engage with some of the most prominent figures in Turkish journalism and academia, allowing journalists to offer their unique perspectives on regional and global issues.

The academy's week-long program provides an international platform for journalists to discuss, debate and analyze some of the current regional and global challenges, while the DS Centre's event at the SDE presented journalists with comprehensive information on Turkey's war on terror and new perspective on the security challenges Turkey faces in the fight against terrorist organizations such as DAESH. The event was attended by senior officials from Turkey's foreign ministry and the Department Chair of International Relations at TOBB University of Economics and Technology Haldun Yalçınkaya, who provided information on Turkey's counterterrorism approach. Security analyst Necdet Özçelik, another speaker at the panel, discussed different conceptualizations of terrorism.

Professor Yalçınkaya drew attention to the significance of Turkey's geographical location, underlining that Turkey is more susceptible to terror threats by means of proximity. Yalçınkaya noted that "one out of three foreign terrorist fighters will go back to their country and a portion of them will execute another terror attack."

Özçelik stated that "before assessing terrorism, we must understand the nature of the threat from the Turkish perspective." Stressing that there is no such thing as a good or bad terrorist, Özçelik said, "even if the PKK and DAESH fight against each other, it does not legitimize either group's actions," closing his remarks by addressing the position of the PKK and the Syrian PKK-affiliate Democratic Union Party (PYD) terrorist organizations, noting that "arming and supporting the PYD/YPG risks importing threats into Turkey."A senior official from the Foreign Ministry provided details about the foreign terrorist fighters phenomenon, telling journalists that even though "foreign fighters" is not a new term, those terrorists -- fighting for non-state actors – along with their tactics, are nothing new. The ministry official added that more than 2,000 foreign fighters have been detained by Turkey, while more than 4,000 were arrested. Turkey has placed 38,000 people on their no-entry list, and the official indicated that a lack of cooperation from the international community regarding the sharing of intelligence continues to be a problem.
RELATED TOPICS