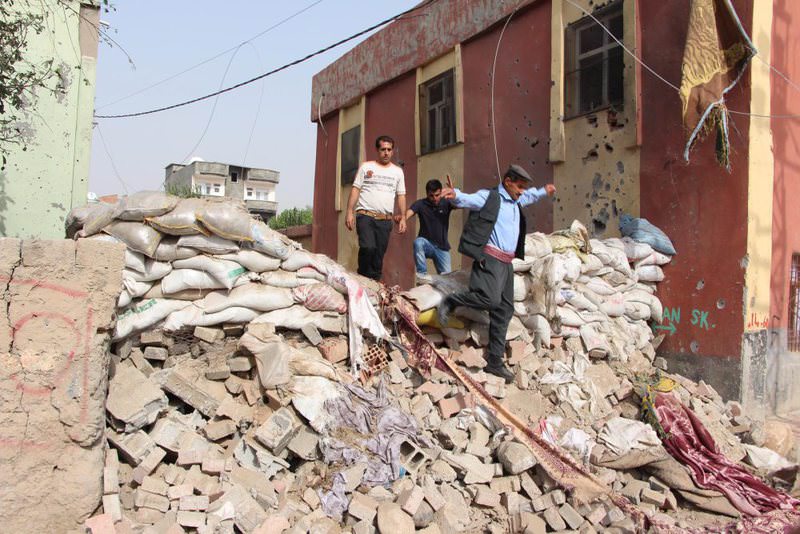 The reconstruction of southeastern districts hit by PKK terror has begun, President Erdoğan said. He also called on Parliament and the judiciary to take necessary steps to lift the immunity of parliamentarians who aid and abate terrorist organizations

President Recep Tayyip Erdoğan said on Monday that the government has started reconstruction in southeastern districts hit by clashes with PKK terrorists.

"Ditches have been dug in the southeast, but not for water or electric installations. Their aim was to prevent security personnel getting into those zones," he said, referring to nearly 3,000 ditches and barricades officials in terror-hit region have filled and removed.

Speaking during the Urban Transformation Convention organized by the Turkuvaz Media Group, Daily Sabah's parent company, Erdoğan said he prefers demolishing all the buildings, except the historical ones, in these areas, stressing that there is no proper infrastructure due to irregular urbanization in the districts.

The historic identity of the Sur district of Diyarbakır will be presented in an ideal way and its people will be provided security to continue their lives far from terror, Erdoğan said. After a months-long curfew, Sur was cleared of PKK presence in heavy military operations. Construction of hundreds of houses has also begun in the Silopi district of Şırnak, Erdoğan said, adding that the same procedure will also be taken for Şırnak's Cizre district.

Commenting on discussions regarding the ruling Justice and Development Party's (AK Party) proposal to opposition political parties to lift the immunity from prosecution of all deputies and collectively review the 506 outstanding dossiers, Erdoğan said Parliament should take into account the summary of proceedings so "the immunity of those who transfer weapons to terrorist organizations be lifted."

In response to PKK attacks throughout the southeast, the government has recently announced a "master plan" to tackle the region's socio-cultural and economic problems.

Offering details of the action plan, Prime Minister Ahmet Davutoğlu said one of the most crucial items of the plan is a social mobilization campaign to heal the wounds of destroyed districts. Davutoğlu said that the government will heal all the wounds caused by terrorist attacks. With the new plan, family social support programs will begin throughout the region. Davutoğlu assured that all needs of the citizens are to be addressed and the support program will also provide regular housing benefits. The government also vows to restore schools and hospitals while providing sufficient education to get the children back on track.

He said the government aims to compensate for the economic losses that people in terror-hit regions have suffered. "Premium debts will be postponed, as will loan repayments for the merchants, craftsmen and farmers. There will be significant moves to enhance empowerment, as we have already made TL 200 billion [$68.62 billion] of investment in the eastern and southeastern regions of Turkey."
RELATED TOPICS