OIC Secretary General Madani: Phenomena of extremism, violence and terrorism must be addressed 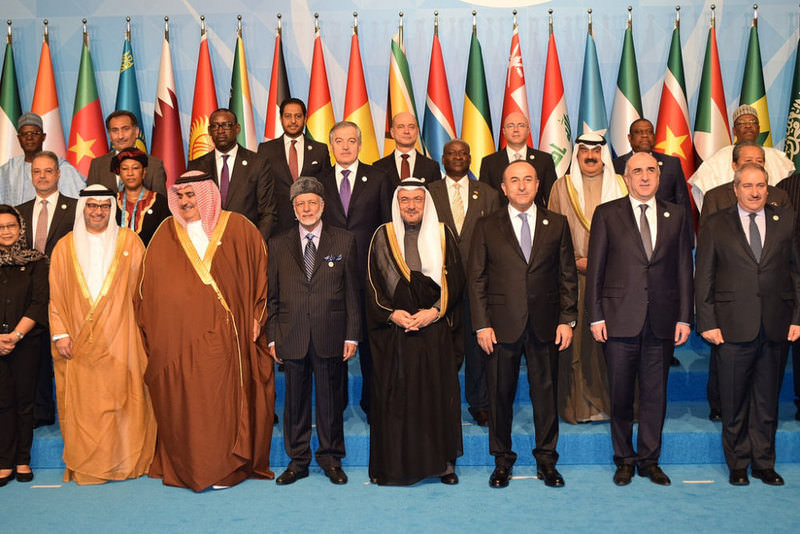 OIC Secretary General Madani (C) in the group photo at a council of foreign ministers meeting on Wednesday.
by Daily Sabah Apr 14, 2016 12:00 am

Addressing extremism, violence and terrorism is a top priority for the OIC, and the current phenomena stokes the flames of hate speech toward Islam, OIC Secretary General Madani said, adding that absence of political will in the Palestinian peace process causes it to stagnate

At a council of foreign ministers meeting on Wednesday, Organization of Islamic Cooperation (OIC) Secretary General Iyad Ameen Madani said addressing the phenomena of extremism, violence and terrorism is crucial because these phenomena lend themselves to hate speech toward Islam and inflame Islamophobia.

"It is without doubt that addressing the phenomena of extremism, violence and terrorism, which hinder all forms of development, advancement and reform and which pour into the reservoir of hate rhetoric for Muslims, is a top priority," said Madani.

Madani touched on Palestine, saying: "Action in the Palestinian cause remains stagnant due to the absence of the political will needed to actuate the peace process."

With regard to the misery of refugees, Madani said: "Afghan, Syrian, Somali, Yemeni and other refugees continue to suffer."

Underscoring that poor countries suffer from domestic problems more than developed countries, Madani said: "Economic crises deepen the fragility of domestic conditions, and need to be addressed with seriousness and transparency."

Saying that the OIC member states gathered at the summit intended to create solutions to these challenges and present the will to do so, Madani said: "We meet here today to provide the will and take decisions. We meet to contribute to changing the reality, and to rise above our disagreements and differences in order to achieve higher and more important interests."

Madani reflected on those who look to the OIC to take concrete steps, saying: "We meet to develop trust and offer hope to people who await the culmination of our meetings and the sound and discerning decisions we take in them. In that regard, I look forward to providing continuous support to member states, to help them implement the decisions agreed upon and reached in the meetings held by the various OIC councils. I hope that the 10-year strategy plan will be a document we all feel is personally ours, and we will all be keen on implementing."

The secretary-general said there are many issues that the Muslim world is facing, saying: "Reference must be made to the issues, challenges and successive disputes our Islamic world is witnessing, as well as to the absence of permanent solutions to accumulated conflicts. The intertwined nature of these conflicts and disputes, and foreign intervention in them, fuel their gravity and complexity and prevent their potential settlement."

"It is, therefore, a must that we intensify our efforts to reach practical solutions that will fulfill our aspirations and that are in line with the legitimate rights of our peoples to peace, security and development," he added.

As a guest in Istanbul for the summit, the secretary general extended his gratitude to the government and people of the Republic of Turkey for the hospitality he has received since the moment he stepped on Turkish soil.