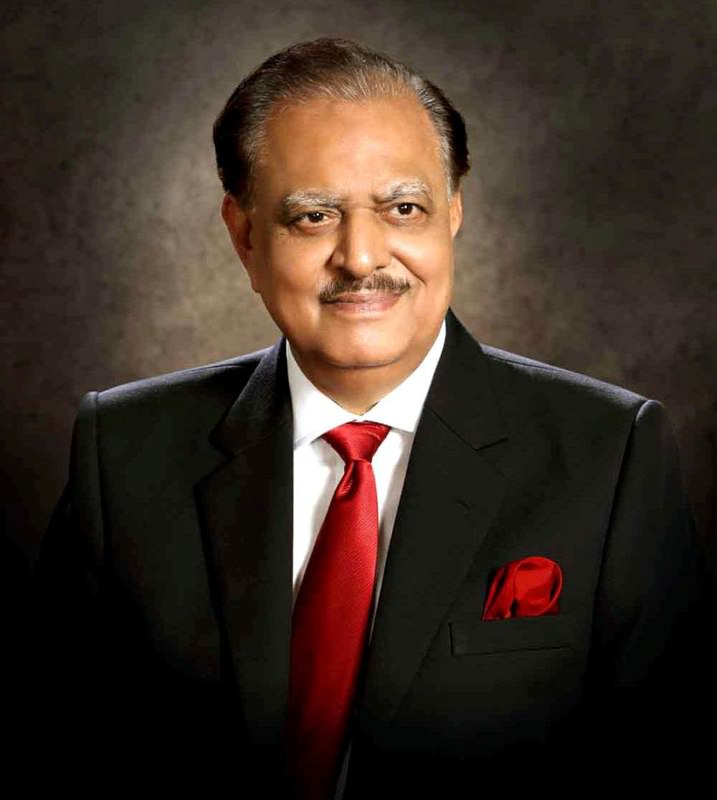 by Ali Ünal Apr 14, 2016 12:00 am
President Mamnoon Hussain of Pakistan is among the world leaders participating in the 13th session of the Islamic Summit Conference organized by the Organization of Islamic Cooperation (OIC) in Istanbul. In an exclusive interview with Daily Sabah, Hussain said that peace, moderation, compassion and tolerance are the essence of Islam and that it is the responsibility of Muslim leaders to project Islam in its right light to the outside world and leave no space for misinterpretation or misrepresentation.

Commenting on Turkish-Pakistani relations, Hussain emphasized the fraternity embedded in shared history and commonalities of faith and culture and added that the unique geographic locations of both Pakistan and Turkey add to their geopolitical significance. Touching on Pakistan's fight against terrorism, Hussain said that Pakistan and Turkey have shared experiences in the fight against extremism and terrorism and stressed that terrorism knows no borders and combating it effectively continues to be a global challenge.

Pakistan and Turkey are bound by a long-standing, abiding relationship unparalleled in mutual trust, understanding and close cooperation. Our fraternal ties are embedded in shared history and commonalities of faith and culture. The unique strategic location of both Pakistan and Turkey adds to their geopolitical significance. While Turkey is a bridge between Asia and Europe, Pakistan is located at the crossroads of South Asia, Central Asia and the Middle East and shares borders with two highly populated, major economies of the world and could be a gateway to energy-rich Central Asia. In recent times, our regions have been affected by conflict, instability and the scourge of terrorism. Both Pakistan and Turkey have suffered grievously at the hands of terrorism while they have made unmatched sacrifices fighting this menace. Terrorism knows no borders, and combating it effectively continues to be a global challenge. Pakistan needs the cooperation and support of the international community and of our neighbors to control funding, the supply of arms and training of the terror networks that have been wreaking havoc. Since the comprehensive military operation Zarb-e-Azb was launched in 2014, the backbone of the terrorists has been broken and they are on the run. In their desperation, terrorists are picking soft targets, including innocent civilians, women and children. While condemning terrorism in all its forms and manifestations, we remain determined to completely eliminate this scourge.

Pakistan and Turkey share experiences in the fight against extremism and terrorism. I deeply appreciate the steadfast support and solidarity that we have received from Turkey in Pakistan's struggle against terrorism. We, for our part, stand shoulder-to-shoulder with Turkey. We have no doubt that the brotherly people of Turkey will decisively defeat the scourge of terrorism with their strong will and unshakable resolve.

DS: As a nuclear country, what are Pakistan's contributions to global nuclear security?

Pakistan is a responsible nuclear state and has been actively and constructively engaged in the Nuclear Security Summit process. We have stringent nuclear security architecture, including a robust command and control system. The measures taken by Pakistan have won international recognition. Our nuclear regime is dynamic and is regularly reviewed and updated. Recently, as another manifestation of our commitment to the objective of nuclear security, Pakistan ratified the 2005 Amendment to the Convention on the Physical Protection of Nuclear Material (CPPNM). Pakistan remains proactively engaged with the international community and we also work closely with the International Atomic Energy Agency (IAEA).

DS: What are your thoughts on religious extremism? What can Pakistan do to eradicate Islamic extremist ideologies?

It is unfortunate to see extremism of different shades and colors rear its ugly head in various parts of the world. It seems clear that intolerant ideologies are growing worldwide, and with them the levels of violence. Quite often, innocent people are the victims of such extremism and intolerance.

There is another unfortunate tendency in certain sections to associate our religion of peace with violence and terrorism. Projecting a flawed understanding of Islam or killing innocent people in the name of religion are both un-condonable travesties. Equally reprehensible are different manifestations of Islamophobia. Peace, moderation, compassion and tolerance are the essence of Islam. It is our collective responsibility to not allow any misguided elements within our fold define Islam to the world through their misguided actions. Similarly, it is our responsibility to project Islam in its right perspective to the outside world and leave no space for its misinterpretation or misrepresentation. In this regard, among others, the role of our intellectuals, academics, religious scholars and youth is very important.In the case of Pakistan, we have evolved a comprehensive National Action Plan with the consensus of all stakeholders to eradicate extremism and terrorism. We are simultaneously taking other measures while the internationally acclaimed military operation Zarb-e-Azb is ongoing. We have reviewed laws and improved the judicial process to ensure speedy justice. We are reforming the education system, particularly religious education, and have taken stronger measures against hate speech. Effective efforts are also underway to squeeze the financial resources of terrorists, which requires international cooperation as well. We are rebuilding areas affected by terrorism and are offering scholarships to deserving students from under-developed areas. Similarly, we have initiated skills development programs for the educated youth that offer them better job prospects. These efforts are yielding successful results.

DS: Turkey and Pakistan recently signed a framework for a free trade agreement. When do you think it will be signed and what are Pakistan's expectations from the agreement?

The leadership of both Pakistan and Turkey has a shared vision of transforming our traditionally cordial ties into a robust economic partnership. I am encouraged by our growing economic collaboration in recent years. In order to further boost our commercial ties we need to have enhanced legal and institutional arrangements. In pursuance of this goal we recently signed a framework agreement for concluding a comprehensive free trade agreement between Pakistan and Turkey, which covers the trade in goods, services and investments. I have directed our concerned departments to pursue negotiations on a fast-track basis and will complete them by September of this year. Once concluded, this will substantially enhance bilateral trade and help both countries to optimally realize the potential that the big economies of Pakistan and Turkey have to offer.

As a neighboring country of Iran, how would you evaluate the post-sanctions period? Do you think that this deal is promising for the future of the region?

Pakistan has welcomed the lifting of sanctions on Iran that has opened new avenues for enhancing economic interaction. I had the privilege of hosting the Iranian president, His Excellency Dr. Hassan Rouhani, last month. This visit offered us an opportunity to exchange views on strengthening bilateral relations in diverse fields. The two countries signed six agreements on promoting bilateral cooperation in various fields. We also decided to increase the annual bilateral trade volume to $5 billion within the next five years. Operationalization of the Iran-Pakistan gas pipeline is a priority that will help us meet our growing energy needs.