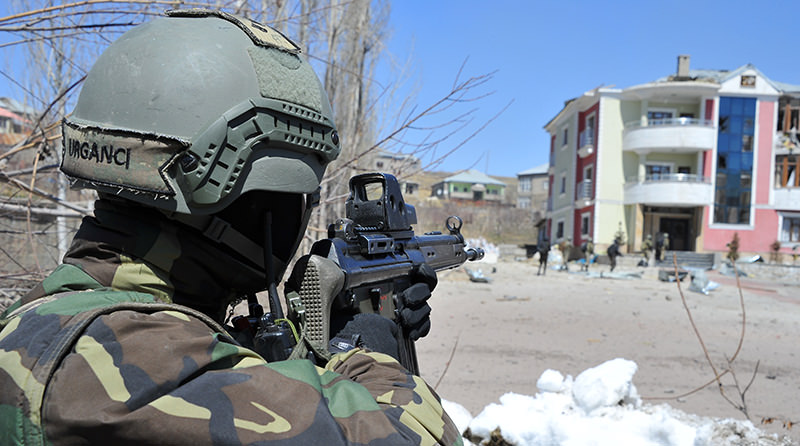 Counterterror operations against the PKK in the southeastern Yüksekova district in Hakkari province ended on Wednesday, a statement from the General Staff said.

The operation against the PKK was launched on March 13 in order to restore public order, and the General Staff has said that security forces are still conducting detailed searches to destroy explosives.

Twelve PKK militants were killed on Tuesday during in operations in the southeastern provinces of Mardin, Şırnak, Hakkari, and Bingöl. Another was killed in a different operation in the Nusaybin district of Mardin province, bringing the total number killed in the district to 275.

The military also killed one PKK terrorist in Şırnak province on Tuesday. A total of 219 terrorists have been killed in the province so far.

Separately, two more terrorists were killed in the Genç district of Bingöl province. According to a statement from the Bingöl Governorship, they were killed during ongoing operations on the outskirts of the villages of Servi and Gercekli in Bingöl.

Several weapons were also seized in the operations, the statements added.

Six people suspected of having links with the PKK were detained yesterday in an anti-terror police operation on four addresses in the Kurtalan district of the southeastern Siirt province.

The PKK, which is considered a terrorist organization by the U.S. and the EU, resumed its 30-year armed campaign against the Turkish state in July 2015.

Security sources announced that 3,953 PKK terrorists have been killed since the beginning of operations on July 24 last year. So far 4,489 handmade explosives were dismantled together with 2,111 barricades and 773 ditches filled in southeastern provinces. In the operations, 393 members of the security forces, including police officers and village guards, have been killed.