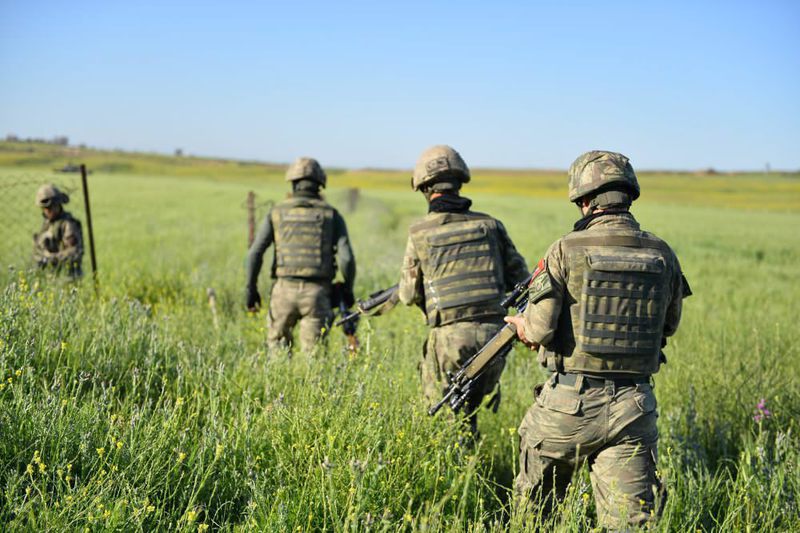 by Merve Aydoğan Apr 21, 2016 12:00 am
As southeastern Turkey continues to be the scene of significant military operations since December 2015 with security forces attempting to clear urban centers of the PKK, senior PKK figures Cemil Bayık and Murat Karayılan are having a serious disagreement regarding the positioning of the PKK. According to intelligence sources, Karayılan aims to send reinforcements to urban centers while Bayık wants to pull back forces to rural areas. The military is carrying out cross-border operations in Northern Iraq against PKK targets and has also arrested hundreds of people with suspected links to DAESH, the PKK and far-leftists groups, and detained over 1,300 people across the country, according to a recent statement released by the Prime Minister's Office.

Although more than 350 security personnel have been killed since the PKK, which is listed as a terrorist organization by Turkey, the U.S. and the EU, resumed its 30-year armed campaign against the Turkish state last July, intelligence sources reported recently that the PKK is facing serious disputes between senior figures concerning future tactics. Some members reportedly support Bayık while others support Karayılan, resulting in conflicting internal views. It has further been noted that Karayılan supports his position by claiming that pulling back to rural areas would end the PKK, but Bayık apparently said that they should continue combat against the government from rural areas.

The PKK adopted an urban war strategy after the experience its militants gained while fighting alongside the People's Protection Units (YPG) against DAESH in Kobani, Syria in 2014. In December, the PKK established the Civil Protection Units (YPS) by uniting the organization's urban youth wing, the Patriotic Revolutionary Youth Movement (YDG-H), with its militants operating in rural areas and the Self-Defense Units (ÖSB), something interpreted by some as an indication the PKK was planning to move clashes with security forces from rural to urban areas in the southeast. However, since the beginning of the counterterrorism operations, 1,250 terrorists have reportedly been killed as of March in Şırnak, Diyarbakır, Mardin and Muş provinces. Additionally, 175 barricades have been removed, 56 ditches filled in, 3,100 buildings cleared and 47 rifles, five rocket launchers and 144 grenades confiscated.

63 pct of public favor lifting immunity of all HDP deputies

Sixty-three percent of the Turkish public supports lifting the immunity of the pro-PKK Peoples' Democratic Party (HDP) deputies who were involved in terror activities, according to recent survey conducted by A&G Research Company.

In a face-to-face questionnaire conducted on March 26-27 in 39 provinces with 2,199 people, 41 percent of the participants indicated that the immunity of all the HDP deputies should be lifted while 22 percent said this solution should be a last resort, used only with those involved in terror.

Prime Minister Ahmet Davutoğlu had proposed in mid-March that Parliament should lift the immunity from prosecution for all lawmakers and collectively review the 506 outstanding dossiers. With the dossiers waiting at the Justice Ministry and the Prime Ministry, the number of motions in Parliament is expected to reach 550.

Regarding the fight against PKK terror, 66.6 percent of all participants declared their support for armed struggle, while 29.5 percent of them said political, social and economic solutions should be sought.

Officials have resolutely reiterated that security operations against the PKK in Turkey's southeast will continue.

When asked about the future of this fight, 63.3 percent of the participants said Turkey will eventually put an end to the terror. Regarding party affiliation, 84.8 percent of the ruling-Justice and Development Party (AK Party) voters and 61.5 percent of the Nationalist Movement Party (MHP) voters believe in such a solution.
Last Update: Apr 21, 2016 10:24 am
RELATED TOPICS