Turkish presidential spox: Kilis would not be targeted if safe zone plan implemented 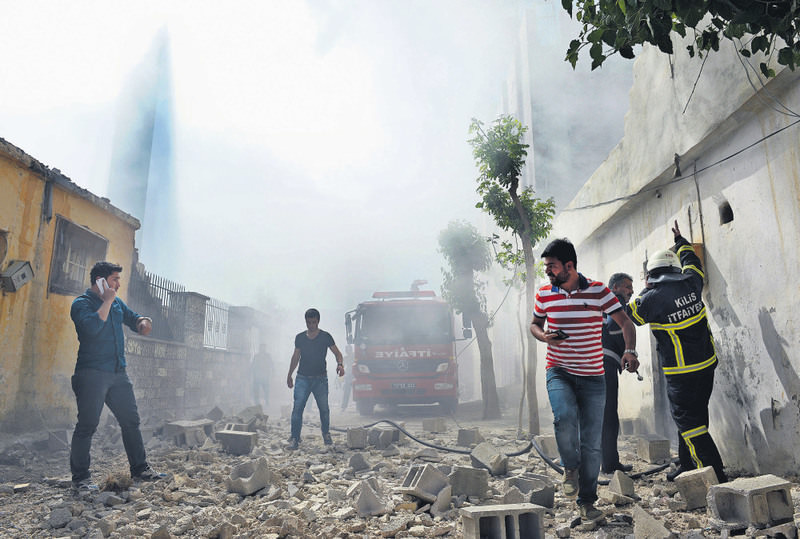 Presidential spokesman İbrahim Kalın said Monday that the establishment of a safe zone in Syria would have protected Turkey from attacks and rockets and that the whole issue must be taken into account if an effective solution is to be reached.

Speaking to reporters, Kalın said Ankara has voiced its suggestions about setting up a safe zone in Syria for two years, but a lack of will from the international community to realize the plan continues despite supportive statements.

"Perhaps if this safe zone had been established there two years ago there would not have been such intense flows of refugees and terrorist organizations would not have taken root there [in northern Syria]. Our proposal is still valid," he said.

"Not only overland, but this safe zone [on the] border must be drawn by air and this has to be done by an international agreement; this would prevent many from suffering."

He denied claims that Turkey has intelligence the rockets were fired intentionally and said: "There is a chaotic atmosphere of war in Syria. Some of them might hit unintentionally and some might be fired intentionally. At the end of the day, there is a terrorist organization that we also fight against. As we intensify the fight, of course DAESH and other terrorist organizations can take different actions [in response]. However, this will never remove our determination to fight."

He said some 2,770 suspects, including 1,232 foreigners, have been caught in police sweeps and 954 of them are being prosecuted.

He also said that Ankara advocates solving the problems with Russia through diplomatic means and "it is ready for the solution of problems diplomatically."

He stressed that the Turkey-EU deal to stem the illegal migration flow has been effective in achieving its purpose, but pointed to Syria's civil war as the main source of the problem.

"The technical process about the visa liberalization agreement with the EU is continuing and more than half of the criteria have been fulfilled. There is no reason to postpone implementing this deal in June."

Concerning the latest rapprochement with Israel, Kalın said the ongoing talks on normalizing relations are conducted in accordance with the conditions set by Ankara and have approached their final stage, adding that both sides plan to hold the next meeting soon. He also reiterated Ankara's position in favor of the two-state solution, adding that Turkey is ready to contribute after the normalization process with Israel.Ankara has three conditions to restore ties with Israel - an apology for the Mavi Marmara raid, compensation for the families of those killed in the raid and the lifting of Israel's eight-year blockade on the Gaza Strip. Israeli Prime Minister Benjamin Netanyahu has already apologized for the raid and there have been reports that an agreement on conditions for compensation was sought between the two countries. The blockade of the Gaza Strip remains the most crucial part of Ankara's list of demands.
RELATED TOPICS