PM Davutoğlu assures Turkey will fully save itself from terrorism soon 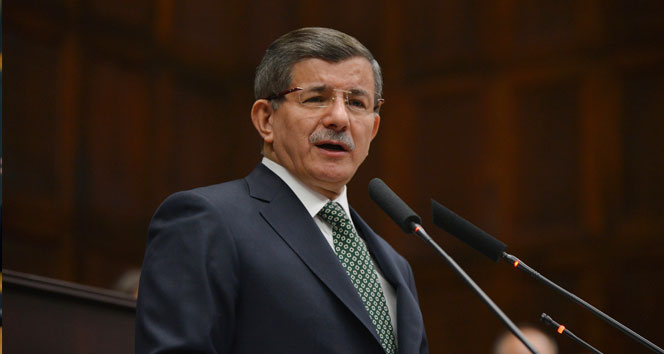 Prime Minister Davutoğlu said that those who confront Turkey on multiple fronts by using terrorist methods only try to make the country waste its energy, but it will completely get rid of the terrorist problem soon

Speaking Tuesday at the weekly Justice and Development Party (AK Party) group meeting at Parliament Prime Minister Ahmet Davutoğlu said that Turkey will save itself from the scourge of terrorism soon at the end of the counterterrorism operations, which will continue resolutely.

Turkey is currently fighting terrorist organizations on multiple fronts, including the PKK, DAESH and the far-left Revolutionary People's Liberation Party-Front (DHKP-C) both within and outside its borders.

"Nobody should doubt it. This fight, which we will carry out until Turkey saves itself from the problem of terrorism, will continue without rupture. Hopefully, as a result of this determined fight, Turkey will be saved soon from this terrorism problem completely," he said.

Saying that those who use terrorism against Turkey only try to waste the country's energy and time, Davutoğlu said: "PKK and its extensions on one side and DAESH on the other, organize simultaneous attacks. Two terrorist organizations fight against each other. Those who slander Turkey on the DAESH issue are also part of this game. The Democratic Union Party [PYD], DAESH and killer [Bashar] Assad regime [in Syria] are acting in blatant cooperation. Those who dig ditches, turn our cities into ruins, attack our citizens and those who fire rockets targeting Kilis reflect the same mentalities."

Regarding the BBC's recent interview with one of senior PKK leader Cemil Bayık titled: "Cemil Bayık: An interview with Turkey's most wanted man," Davutoğlu dismissed it as not being journalism and said it rather promotes terrorism.

"Unfortunately, the international community cannot give a good account of itself and a hypocritical attitude is still embraced on the issue of terrorism. Tents of a brutal terrorist organization might be erected in European capitals and their rags [flags] might be displayed," he said, and added that actions in favor of the PKK should not be regarded as journalism after its attacks, and likewise, Turkey cannot consider any action about DAESH as journalism after the Paris and Brussels attacks.

Presidential spokesperson İbrahim Kalın on Tuesday also accused some international media organizations of trying to justify the PKK by conducting interviews with its leaders. "These efforts are to exonerate the terrorist organization and have nothing to do with journalism.

"This is nothing but indirect support for terrorist propaganda."

He asked what would have been the reaction from countries if a foreign news agency, which was financed with its people's taxes, had carried out an interview with al-Qaida members and tried to portray its leadership as "reasonable and legitimate actors" following the 2007 terrorist attacks in the U.K.

PKK supporters had set up a tent in Brussels in March while Davutoğlu and a Turkish delegation were working with the EU to reach the deal on refugees and migrants. The tent had been set up in front of the European Council building just two days after a terrorist attack killed dozens of people in Ankara on March 13.

Although Belgian police had ordered the tent to be removed following the bombings in Brussels, the PKK supporters set up the tent again. Belgian government ministers had made no move to interfere with the tents, although they had pledged to cooperate in the fight against terrorism.
Last Update: Apr 27, 2016 1:31 pm
RELATED TOPICS