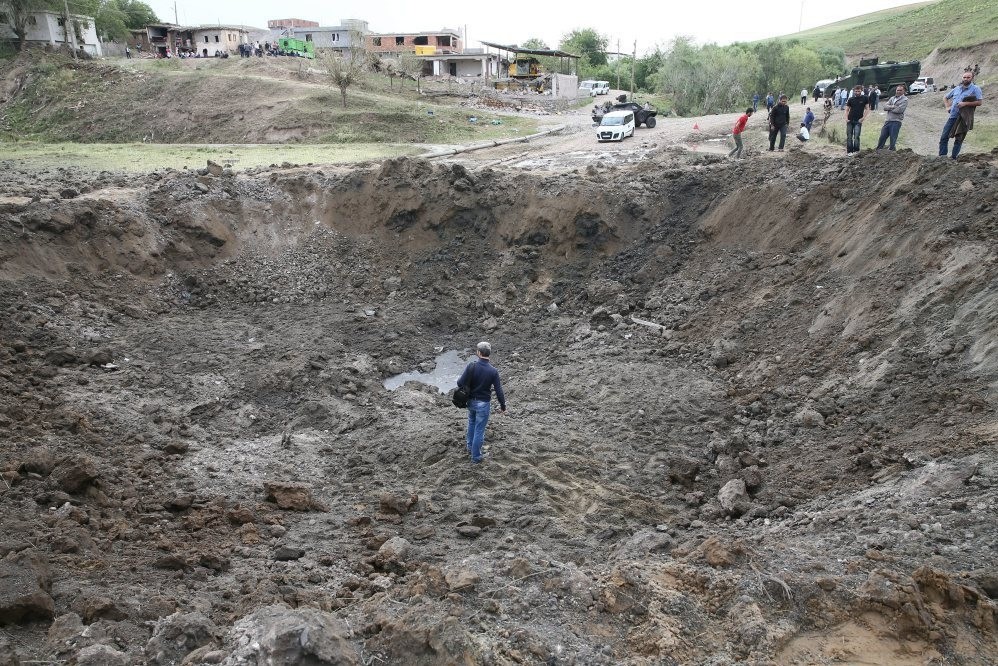 A 20-meter-wide and 7-meter-deep crater formed after 15 tons of explosives detonated during a PKK truck bombing
by Fatih Şemsettin Işık May 18, 2016 12:00 am

The deaths of 13 missing villagers since the brutal attack of the PKK in Dürümlü region of Sur district in southeastern Diyarbakır province on Thursday was only revealed through DNA remains that match their relatives, fueling further negative sentiment toward the group

The 13 villagers missing since the explosion of a PKK truck bomb in the Dürümlü region of the Sur district in southeastern Diyarbakır province last Thursday were declared dead Tuesday after detailed forensic analysis connected DNA from the scene with the deceased's relatives. The PKK terrorist organization continues to persecute local Kurds in southeastern provinces with attacks that leave many civilians dead, fueling negative sentiment toward the group from people across the country. With this development, the PKK has again brutally killed Kurds even though it claims it acts on behalf of them in the costly conflict. DNA testing carried out by Istanbul's Institute of Forensic Science, which compared blood samples from the relatives of the missing villagers with DNA from those killed in the bombing, confirmed that the villagers were killed by the truck bomb, which used 15 tons of explosives. Following the testing process, the villagers' funerals were held in their hometown Tuesday. Speaking at the funeral, Interior Minister Efkan Ala said: "This was a massacre, an attack on all of Turkey." As attendees chanted against the PKK brutality, crying women were a stark reminder that the PKK harms Kurds the most. The explosion on Thursday occurred about 25 kilometers from Diyarbakır and killed 17 people, including 13 civilians and injured 23 others.

Many civil society organizations in Diyarbakır, a predominantly Kurdish province, condemned the attack and voiced their exasperation from the PKK's fighting methods. Speaking to Anadolu Agency (AA), Foundation for Free Thought and Education Rights (ÖZGÜR-DER) Diyarbakır branch Chairman Süleyman Nazlıcan said the PKK is imposing its policies on Kurds rather than defending their fundamental rights.

Along with hurting Kurds the most, the PKK and its political affiliates continue to justify themselves in massacres. The PKK previously blamed the dead civilians for the explosion. A statement appeared on pro-PKK websites on Sunday which said that the incident happened after villagers – which the PKK claimed were "village guards," meaning they worked as volunteers for the Turkish state's efforts against the terrorist organization – fired at the truck: "The truck was not there for the attack, it was for delivering the explosives."

Additionally, pro-Kurdish Peoples' Democratic Party (HDP) Co-Chair Selahattin Demirtaş said that those responsible for the attack must be revealed and they should "apologize" to the families of the victims. He did not mention the PKK in his statement.

Yet, speaking to Al Jazeera Turk, Talip Yeşil, a relative of one of the dead villagers, said that the PKK terrorist organization deliberately blew up the bomb-laden truck, responding to the assertion by the PKK that an attack by the villagers on the truck caused the explosion.

He dismissed PKK claims that the terrorists had made clear to the villagers their identities and their links to the organization before the event, saying that if the villagers knew that the people in the truck were from the PKK, they would have suspected that the truck was filled with explosives and nobody would have dared to chase them.

The PKK has escalated its terrorist attacks after it ended the cease-fire with the Turkish state last July. It has increased fear in southeastern provinces with many affiliated groups in order to eliminate reactions against its armed attacks and bombings as well as the problems that it has faced. The PKK-affiliated Kurdistan Freedom Falcons (TAK) continues to be another threat to people in big cities and tourist areas.

A suicide bombing in Bursa near the historic Ulu (Grand) Mosque injured 13 people on April 29, with only the bomber killed in the explosion. Interior Minister Ala confirmed that Eser Çalı, 24, was the Bursa suicide bomber and that she was a member of the PKK.

On March 13, the TAK carried out a car bombing at Ankara's Kızılay Square, killing 35 people, including women and children and injuring 125.

On Feb. 17, 29 people were killed in another bombing in Ankara also carried out by TAK.

Five civilians, including an infant and two children, were also killed in a PKK suicide attack in the Sur district of Diyarbakır in January.

The PKK is listed as terrorist organization by Turkey, the U.S. and EU. Security forces have been conducting anti-terror operations since late 2015 in an effort to clear PKK terrorists from urban areas in the country's southeastern provinces.
Last Update: May 18, 2016 11:56 am
RELATED TOPICS