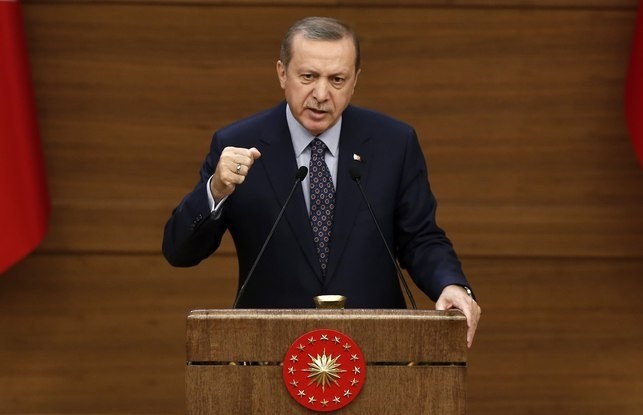 President Recep Tayyip Erdoğan Tuesday criticized the West for keeping silent over the deadly PKK attack that killed 13 villagers in the village of Dürümlü in Diyarbakır's Sur district last Thursday. Speaking at the third gathering of ministers of water affairs in the Organization of Islamic Cooperation (OIC), Erdoğan slammed what he called the West's hypocrisy when it comes to terror attacks. "A big explosion took place somewhere 20 kilometers from the Diyarbakır city center on Thursday. A bomb weighing around 10 to 15 tons exploded. This act should echo very seriously around the world. The West has kept silent even though the [PKK] separatist terrorist organization claimed responsibility for the attack," he said.

Declaring that terrorist attacks in Europe are taken more seriously than those in Turkey or Pakistan, Erdoğan said: "There have been many terrorist acts before but the world always kept silent over them. There is noise when it is in Paris and Brussels, [but] there is nothing when it is in Lahore, Ankara and Diyarbakır."

He also said that Turkey continues to combat PKK and DAESH terrorism at the same time. "Turkey continues its fight not only against the PKK and DAESH, but also many organizations," he said, adding that dirty alliances forged under the guise of fighting DAESH will pave the way for greater problems in the future.

Slamming the European Union for its position on providing the pledged financial aid to Ankara for refugees in the country, Erdoğan said the 28-nation bloc acts like it will make a donation to Turkey. "They want us to develop projects for refugees. We already implement our projects in 26 camps. If the promised fund arrives, we can further better the situation of our guests," he asserted.

The EU agreed to provide an additional 3 billion euros of aid to Ankara as part of an agreement that aims to better the conditions of refugees taking shelter in Turkey. Turkish authorities have repeatedly stressed that the money is going to be used for refugees only.