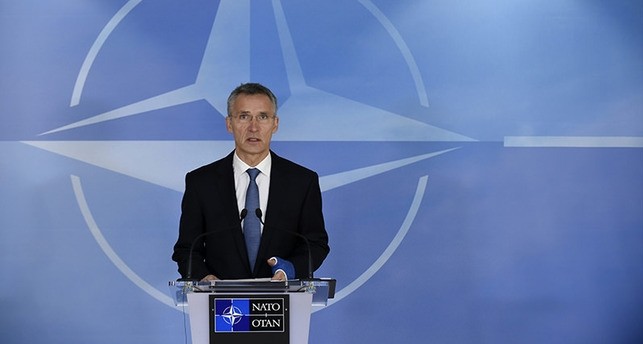 Daesh attacks on Turkey's Kilis province and further support for Turkey will be high on Thursday's agenda at the foreign ministers meeting to be held in Brussels, said NATO Secretary-General Jens Stoltenberg on Wednesday.

Stoltenberg made his remarks at a press conference ahead of the meeting at NATO headquarter in Brussels.

The situation in Iraq and Syria as well as Kilis, battered since January by rockets fired by Daesh in Syria, along with measures to counter Russia in Eastern Europe will top the agenda, said Stoltenberg, stating that they will first sign a protocol to bring Montenegro into NATO.

"Following that ceremony, Montenegro will as of tomorrow participate in all NATO meetings as an observer, or invitee," Stoltenberg said. "Once all allies have ratified the protocol, Montenegro will become the 29th member of the alliance. A clear sign that NATO continues to help build stability and security in the Western Balkans."

Stoltenberg stressed the importance of supporting Iraq in anti-Daesh operations and added, "We have received a request from Prime Minister [Haider] al-Abadi to expand our training mission into Iraq itself. And we will consider this request."

Telling how the refugee flow through the NATO-controlled Aegean Sea has fallen 90 percent, Stoltenberg said Thursday's meeting would also cover cooperation between NATO and the European Union in the Aegean.

On the attacks on Kilis, Stoltenberg said they would be discussed and that NATO is concerned since Turkey has suffered several attacks with a high number of civilian casualties.

"Innocent people are being killed, therefore, this is of great concern for all of us. NATO stands in solidarity with Turkey," he added.

Stoltenberg said during a recent visit to Ankara he had met with the Turkish president, prime minister, and several other political leaders and they had discussed the difficult and tense situation along the Syrian-Turkish border. "So, this is high on our agenda," he added.

Underlining that NATO will continue supporting Turkey's security, Stoltenberg said, "We are looking into more what we can do, but I think the important message is that the situation along the Syrian-Turkish border is one of the main topics of the foreign ministerial meeting and that is how we can project stability beyond our borders, because we see the very close links between the stability of our neighborhood and threats against our countries, territories and our borders."