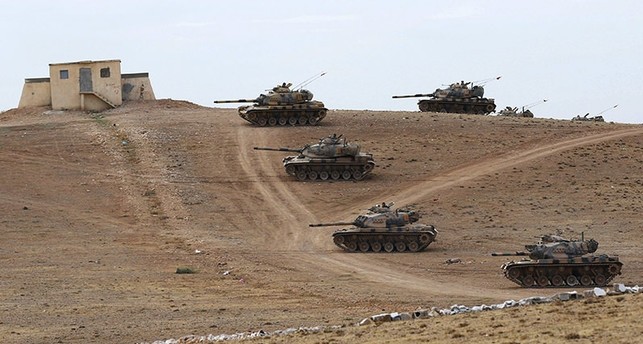 by Daily Sabah May 19, 2016 12:00 am
The safety of Kilis, a border town that has been hit by DAESH missiles fired from Syria for the past couple of months, has improved recently after the state took measures to prevent attacks, Presidential spokesman İbrahim Kalın said at a press conference Wednesday. "What has happened in Kilis saddened us all deeply. We started to work on a two-step measure package. As a result of the measures we have taken in recent days, there has been a partial improvement," Kalın said, adding that the threat posed from across the border proves how right Ankara was to propose establishing a safe zone. Stressing that Turkey destroyed DAESH positions in Syria by using its own means, Kalın said the state aims to compensate the losses that locals in Kilis have had.

"The necessary responses to attacks against Turkey were given with zero tolerance," he added.

Around two-dozen people have been killed in the border town of Kilis by rocket fire from DAESH terrorists since January, prompting the military to respond with artillery.

The Turkish Armed Forces (TSK) have stepped up attacks on DAESH in Syria in recent weeks after rockets fired by the group repeatedly landed in Kilis in what appeared to be a sustained and deliberate assault. More than a dozen rockets hit the town last week alone.

Responding to claims that Turkey helps foreign fighters sneak through the borders, Kalın said there is a hidden agenda against Turkey when there is not a single bit of proof concerning the claim. "We are one of the countries fighting on the front line regarding the fight against DAESH terror. As the president declared last week, nearly 3,000 DAESH positions have been hit and will continue to be hit. More than 1,300 DAESH militants have been neutralized as well," he added.

"While our citizens fall dead every day in the streets of Kilis by rockets launched from the other side, what can we expect from our allies? Let me say it here. We will not hesitate to take the needed steps on our own if necessary," President Recep Tayyip Erdoğan said last week.

The president added, "While countries [taking part in the anti-DAESH coalition] didn't take any steps, didn't conduct the necessary intelligence-sharing, Turkey was expected to do everything."

He also condemned claims that Turkey supported the group as "despicable."

"In fact, during this process, Turkey battled many unfair, ruthless and unfounded accusations," Erdoğan said. "The portrayal of Turkey as a country that helps DAESH is – excuse me if this will sound harsh – despicable."
RELATED TOPICS