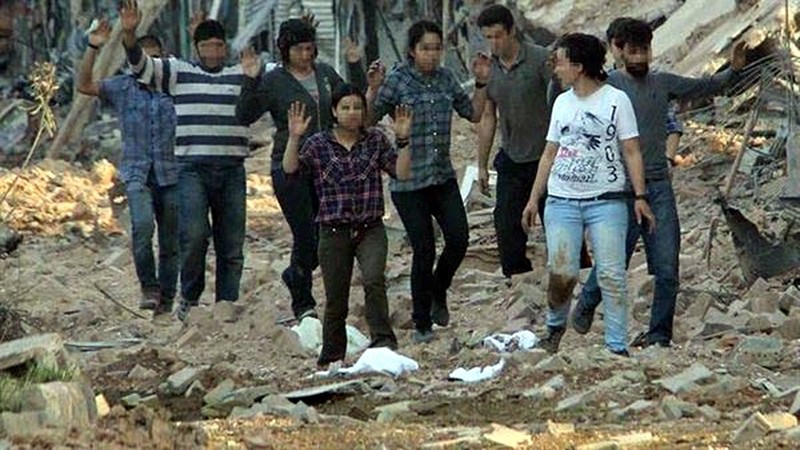 Twenty-six PKK terrorists surrendered to security forces in the Nusaybin district of the southeastern province of Mardin Tuesday in a display of PKK disengagement.

Twenty-two terrorists surrendered in the Fırat neighborhood in the evening of the same day. Zehra Kaya was also captured among the six women. Media reported last week that security forces found Kaya's diary in operations in Nusaybin in which she wrote that PKK leaders use her and her friends as pawns and wanted her diary to be delivered to her family if she were to die. Forces later gave the diary to Kaya's father and he called on his daughter to surrender.

Another terrorist was also captured in the same neighborhood and later arrested after the judicial process.

A member of the security forces asserted that more terrorists would, thanks to the ongoing Hawk-7 Operation meant to fill in PKK trenches, lift barricades, destroy improvised explosives and re-establish public order in the region.

The counterterrorism operation in Nusaybin has been ongoing since March 14.

In another region, forces killed three terrorists in the Silopi district of the southeastern Şırnak province after they failed to stop at a security checkpoint and opened fire along the Silopi-Cizre road, a source said.

According to the unnamed source, who spoke on the condition of anonymity due to restrictions on speaking to the media, after the shootout, security forces seized guns and ammunition from the car.

Security forces also killed three terrorists in Bingöl on Tuesday. According to a statement from the Bingöl governorate, Abidin Bayram, a long-sought-after terrorist with the nom de guerre "Rodi Piling" was among those killed. He had a TL 300,000 ($101,863) reward on his head.