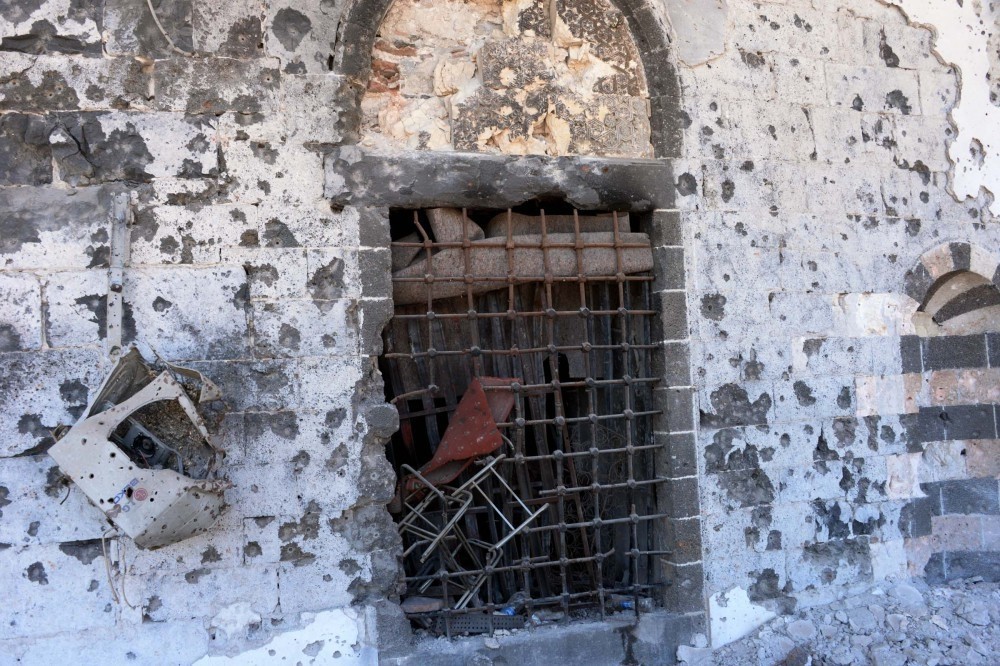 This photo shows damaged walls and a broken window of the historical Kuru015funlu Mosque in Sur district of the majority Kurdish southeastern city of Diyarbaku0131r, May 31.
by Merve Aydoğan Jun 01, 2016 12:00 am

Having failed with its new strategy to turn urban areas into battlefields by digging ditches and erecting barricades, the PKK is once again considering taking their war to rural areas in southeastern Turkey, according to security forces

With Turkey continuing to combat the PKK throughout the southeast, sources from the security forces recently said that the PKK's defeat in urban areas has led it to alter its strategy by moving from urbun to rural areas. Senior PKK leader Cemil Bayık in late April had ordered the continuation of attacks on security forces in rural areas of the southeast. While the PKK's new strategy resembles its former approach, military sources said that rather than engaging in close combat, the PKK aims to increase its "suicide-like" attacks on military outposts with bomb-laden vehicles. According to the latest information from security forces, nearly 11,000 PKK militants have been killed in the first five months of this year in counterterrorism operations.

As a result of the operations, the PKK is also facing a loss of support in the southeast. Military sources said that the number of locals joining the PKK in the east and southeast has dropped by 60 percent to 70 percent.

The National Security Council (MGK) meeting held on May 26 addressed the counter-terrorism operations and stressed that Turkey has never been as close to successfully eliminating the PKK. President

Recep Tayyip Erdoğan had also stressed that the government will continue to combat terrorism until it is completely eliminated.

The intense anti-PKK operations have forced it to alter its strategy, with it moving from from city to rural areas. Underlining that the PKK used to launch armed raids on security forces outposts in groups of 40 to 50, military sources said that PKK attacks on military outposts in rural areas has reduced to groups of five to 10. The sources further surmised that the PKK's change in strategy has three aims, with causing damage to the security forces in one way or another at the forefront. The second aim is to intensify harassment of security forces in rural areas and try to re-focus on urban attacks by distracting security forces. The third aim is to give a message to locals that the group is still around even though it has been driven from urban areas

Although military sources said that the reconciliation process will not be mentioned for at least a year or two, part of the new government strategy is to take steps to embrace locals in the east and southeast, including rebuilding damaged areas. Along with the government's plan to aid locals and reconnect with them, the Justice and Development Party's (AK Party) provincial organizations throughout the month of Ramadan will reach out to locals and hold iftar (fast-breaking) programs for them. Military sources said that families are not allowing their family members to join the PKK causing a drop in support for the PKK. The sources said that the PKK currently receives recruits from Istanbul, İzmir, Adana and Mersin as well as a large number from foreign states. Sources say that nearly 3,000 trained senior PKK members are with the Syrian PKK affiliate Democratic Union Party (PYD). Sources also say that the PKK has lost more than half of its members in the Qandil Mountains, which is as the main PKK headquarters located in Northern Iraq. Erdoğan said that Turkey will "clear out" the PKK from rural areas and sources from the security forces indicated that they have strong capabilities in urban as well as rural areas.

As southeastern Turkey continues to be the scene of significant military operations since December 2015 with security forces attempting to clear urban centers of the PKK, senior PKK figures Cemil Bayık and Murat Karayılan are having a serious disagreement regarding the positioning of the PKK. According to intelligence sources, Karayılan aims to send reinforcements to urban centers while Bayık wants to pull back forces to rural areas. The military is carrying out cross-border operations in Northern Iraq against PKK targets and has also arrested hundreds of people with suspected links to DAESH, the PKK and far-leftists groups, and detained over 1,300 people across the country, according to a recent statement released by the Prime Minister's Office.The PKK adopted an urban war strategy after the experience its militants gained while fighting alongside the People's Protection Units (YPG) against DAESH in Kobani, Syria in 2014. In December, the PKK established the Civil Protection Units (YPS) by uniting the organization's urban youth wing, the Patriotic Revolutionary Youth Movement (YDG-H), with its militants operating in rural areas and the Self-Defense Units (ÖSB), something interpreted by some as an indication the PKK was planning to move clashes with security forces from rural to urban areas in the southeast.
Last Update: Jun 01, 2016 8:02 am
RELATED TOPICS