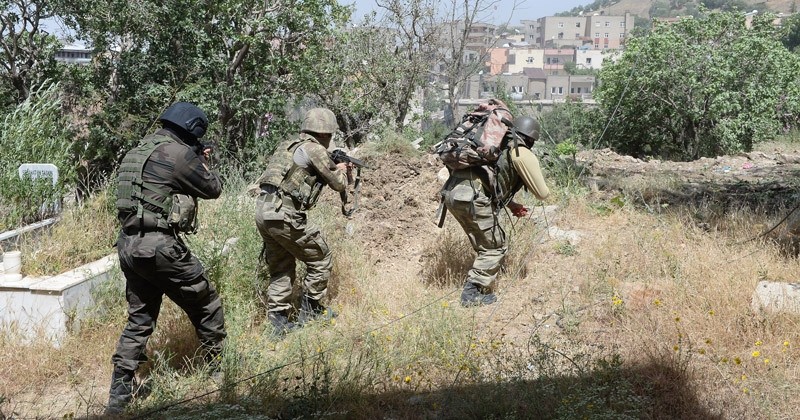 Turkish security forces have dealt a severe blow to the PKK terror organization since late last July, neutralizing a total of 7,600 terrorists during that time.

Turkish President Recep Tayyip Erdoğan, speaking Tuesday at an iftar dinner at the Presidential Palace in Ankara, said that in ongoing operations since July 20, 2015 Turkish forces have neutralized 7,600 terrorists both inside the country and abroad. (Turkish authorities use "neutralized" to refer to the number of terrorists killed, caught or surrendered, whether injured or not.)

The PKK -- also listed as a terrorist organization by the U.S. and the EU -- resumed its 30-year armed campaign against the Turkish state about 11 months ago.

Breaking its pattern of attacks in mainly rural areas, the terror organization has begun to commit attacks in cities, now even during the Muslim holy month of Ramadan.

The latest terror attacks were carried out this week when a car bomb exploded in central Istanbul on Tuesday, killing 11 people including six policemen and five civilians.

On Wednesday, three police officers, including two female police officers (one pregnant at the time), were martyred and three civilians were killed in a car bomb attack on a police station in Mardin's Midyat district.

The Turkish army, in cooperation with the police, has staged broad anti-terror operations in the provinces of Muş, Mardin, Diyarbakır, Şırnak, Hakkari, Van and Bingöl.

The operations were focused on clearing cities of PKK terrorists, filling in trenches, removing barricades and destroying thousands of explosive traps.

According to data from security forces compiled by Anadolu Agency, a total of 4,600 terrorists have been killed inside Turkey, including 700 in the Cizre district of Şırnak province, 507 in Central Sirnak, 496 in Mardin's Nusaybin district, and 300 in Diyarbakır's Sur district

Separately, Turkish jets struck PKK objectives in the Metina, Kakkurk, Gara, Zap and Qandil regions in northern Iraq. Since July 2015, a total of 3,000 terrorists, including some on the organization's so-called leaders, have been neutralized in airstrikes.

Additionally, many weapons and ammunition depots, shelters and caves used by the PKK terror organization have been destroyed in airstrikes.