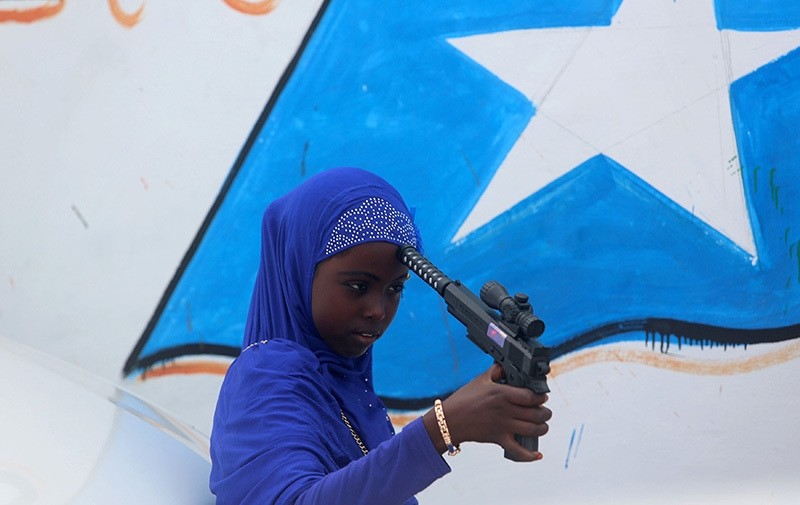 A Somali girl plays with a toy gun after attending Eid al-Fitr prayers to mark the end of the fasting month of Ramadan in Somalia's capital Mogadishu, July 6, 2016. (Reuters Photo)
by Daily Sabah with AP Jul 13, 2016 12:00 am

The leader of Somalia's al-Shabaab terrorist group, Ahmed Diriye, described Turkey as "the enemy of the nation" and accused foreign peacekeeping forces of plundering the country in an audio message published Tuesday.

In his first such message since taking control of the al-Qaeda affiliate following the death of his predecessor in a U.S. drone strike in September 2014, Diriye said Turkish interests in the country were "looting Somali resources more than they help."

"The Turkish government is the enemy of the nation; today Somalia's economy is in total collapse because of their intervention. ... Turkey has invaded this country economically. ... They have taken control of the Somali economy and all they want is to keep the nation in poverty."

Turkey's engagement in Somalia has made visible changes to the country in many areas from health to infrastructure. Bilateral agreements have also been signed, including treaties to train the Somali national army, and Turkish Airlines has started flights to the capital of Mogadishu. Turkey's efforts have paid off, and the increasing relationship between the two states has brought attention to the region, and many have started to question Turkey's involvement in Somalia.

Turkey also provided Somalia with over $400 million in the biggest aid campaign to the country in its struggle to fight starvation. Turkey is set to open its first military base in Africa at which Turkish military officers will train Somali soldiers and troops from other African countries to fight al-Shabaab, military sources said in January. President Recep Tayyip Erdoğan visited Mogadishu in June, inking several development deals and opening the largest Turkish Embassy in the world. The group is fighting to overthrow Somalia's internationally backed government and regularly claims attacks in Mogadishu and elsewhere in the country.

"Somalia is under the occupation of invading Christian crusaders. The so-called international community deceived Somali society to accept that the Ethiopian and other AMISOM [African Union Mission in Somalia] forces are peacekeepers while their aim is to conquer Somali territories to plunder its resources," he added.

AMISOM troops were deployed to Somalia in 2007 to defend the internationally backed government against al-Shabaab attacks.

Somalia was supposed to hold national elections this year, but it now plans to hold what diplomats call a "limited franchise election" in which most citizens do not participate.