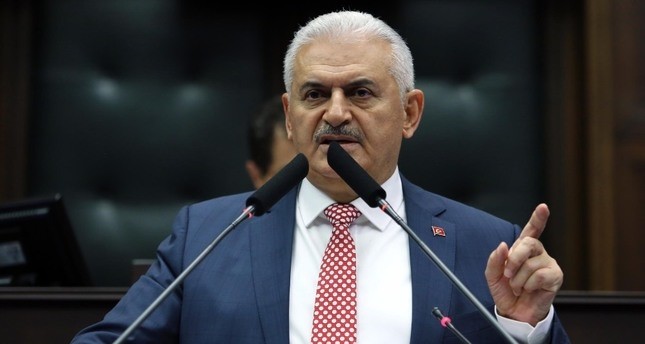 Prime Minister Yıldırım Tuesday slammed the international community for remaining indifferent to some terrorist groups and contended that the Syrian crisis dragging on has led to the formation of various terrorist groups, DAESH in particular, that seriously threaten the security of the entire world

The civil war dragging on in Syria has laid the groundwork for the formation of various terrorist groups, DAESH in particular, in the region, threatening the security of the entire world, Prime Minister Binali Yıldırım said yesterday. Speaking at the Justice and Development Party (AK Party) parliamentary group meeting, Yıldırım asserted that the five-year war in Syria creates a favorable environment for terrorist groups. "We, as Turkey, announced to the world back in 2011 that a new terrorist organization was about to come into existence when the world had not yet heard of DAESH," Yıldırım contended. Slamming the international community for being tolerant to some terrorist groups, Yıldırım said: "The notion that your terrorists are evil but mine are good will trouble you the most."

Turkey will end the feud between countries in the region and shift its focus to handle things through alliances and friendship, Yıldırım also asserted. The prime minister also said Ankara will change its course and focus on forming new alliances in the region for it to develop and thrive. Commenting on the recently agreed reconciliation deal with Israel, Yıldırım said the deal will help Palestinians breathe a sigh of relief. "Palestinians will have much better living conditions thanks to this agreement," he contended. He added that the reconciliation will help Turkish-Israeli relations see a positive outcome after the six-year dispute and non-diplomacy period due to the Mavi Marmara incident. Turkey was a key regional backer of Israel until the two countries cut ties in 2010 following an Israeli raid on a Turkish aid ship bound for Gaza that resulted in the death of nine Turkish activists and one Turkish-American.

The Israeli government took a step toward reconciliation on March 24, 2013, when Israeli Prime Minister Benjamin Netanyahu, with encouragement from U.S. President Barack Obama, apologized for the mishandling of the raid during a conference call with then Prime Minister Recep Tayyip Erdoğan.

Yıldırım said there is no reason for Turkey to have disagreements with its neighbors, contending that the country's intentions are to improve its ties with countries in the Mediterranean and the Black Sea regions.

Speaking at the AK Party's Politics Academy event in Ankara on Monday, Yıldırım said that Turkey intends to mend ties with all countries in the region, including Iraq, Syria and Egypt, to spread peace across the world.

"We had strained relations with Israel, which could return to normal after receiving an apology and compensation.

However, the essential condition for us has been improving the condition of Palestinians so, we refused to settle for a deal without a step on this matter."

Yıldırım said the current agreement provides tons of humanitarian aid to Gaza City and is a result of Turkey's determined stance on Palestine.

Commenting on relations with Russia, Yıldırım said that Turks and Russians have discontent regarding the crisis between the two countries and that the government has taken steps to normalize ties since seeing the public's reaction.

Relations between the two countries hit a low in November 2015 after Turkish jets downed a Russian Su-24 bomber near the Syrian border for violating Turkish airspace. Turkey provided radar data that showed the Russian plane breached the border, but Moscow has insisted that the war plane did not cross the border.

In the beginning, Erdoğan and Russian President Vladimir Putin exchanged harsh criticism and ultimatums in the wake of the jet crisis with the Kremlin directing accusations at Ankara and imposed sanctions that continue to deal a heavy blow to Turkey's tourism sector.

Later on, Erdoğan expressed regret for Turkey's downing of a Russian military jet to Putin in late June, paving the way to improve the soured relations.

Turkey is now also eyeing reconciliation with Egypt should the coup government in Cairo seize the opportunity for a thaw with Ankara.

Amid the comfort of reconciliation in the region with Russia and Israel, AK Party Deputy Chairman Şaban Dişli signaled the opening of a new phase of relations with Egypt, marking the significant progress made in foreign policies by Prime Minister Yıldırım.

Speaking to reporters following a Cabinet meeting in Ankara last week, Yıldırım said: "From Russia to Israel, Egypt to Syria, Iraq to Iran, EU countries to the U.S., we are determined to develop peaceful, friendly and practical ties with everyone. We will keep doing this."