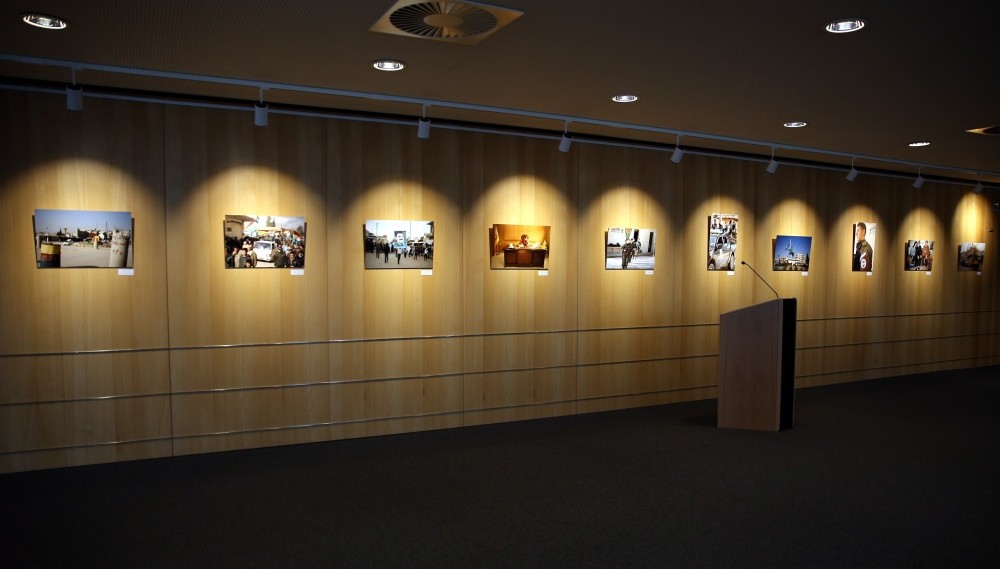 The exhibition openly displays armed militants linked to the PKK.
by Yusuf Ziya Durmuş Jul 14, 2016 12:00 am

The PKK terrorist organization can again boast European tolerance of their presence with a new exhibition of photos of the group's leader and militants from their Syrian branch, despite protests by Turkey

Turkish officials are wondering how a group recognized as a terrorist organization by the European Union can find a place for their propaganda in the heart of Brussels while they continue to commit atrocities in Turkey.

The propaganda in question regards an exhibition in a European Parliament building in Brussels on Rojava, the Kurdish name for a breakaway Syrian region controlled by the Democratic Union Party (PYD). It is an open secret that armed groups in Rojava, including the PYD's People's Protection Units (YPG) and Women's Protection Units (YPJ) militias are linked to the PKK, which has killed thousands of civilians in Turkey during three decades fighting the Turkish state. The exhibition, open since July 11, shows the history of Rojava as well as its current state, portraying militants linked to the PKK in a positive light, with many including references to PKK leader Abdullah Öcalan, convicted by Turkey in 1999 of terrorism and sentenced to life imprisonment on İmrali Island.

The exhibition is held under the patronage of Josef Weidenholzer, an Austrian member of European Parliament and vice president of its Progressive Alliance of Socialists and Democrats group, and has photos taken by fellow Austrian political scientist Thomas Schimidinger. The exhibition comes just a few months after the PKK, despite staunch opposition from Ankara, was allowed to set up a tent with stands in central Brussels. Belgium was reluctant to remove the tent that was set up in March and it was removed weeks later following condemnation from President Recep Tayyip Erdoğan and an appeal from the Foreign Ministry to remove it.

The event opened just days after Foreign Minister Mevlüt Çavuşoğlu, who was in Brussels on an official visit, decried YPG and YPJ flags hanging in the halls of parliament during a visit by leaders from Turkey's pro-Kurdish Peoples' Democratic Party (HDP). Çavuşoğlu said then that "PKK rags" should not be allowed within parliament, just like it would not allow the hanging of a DAESH flag, and criticized "double standards."

Presidential spokesman İbrahim Kalın voiced similar sentiments today. Speaking to Anadolu Agency (AA), Kalın said terrorist propaganda cannot be classified as freedom of expression. "If their reasoning for this exhibition is about the PYD fight against DAESH in Syria, we advise them to open exhibitions regarding the al-Nusra Front, Hezbollah or the [Bashar] Assad regime," he said, in reference to actors in the Syrian civil war, all of which purport to fight DAESH. "It is unacceptable to see daily propaganda of a terrorist organization targeting Turkish citizens under the roof of European Parliament. We cannot comprehend what the European parliament aims for by glorifying an organic extension of the PKK, which is recognized as a terrorist organization by European Union." Kalın said it was blatant proof of the double standards that European institutions have when it comes to terrorism. "We see no difference between DAESH, the PYD, PKK or al-Nusra Front, as all of them kill innocent people." He said the exhibition helped them to understand the purpose of "some European politicians criticizing anti-terror laws in Turkey on every occasion." Since last summer, Turkey has seen an intense PKK campaign, which has killed hundreds of security personnel and civilians since July 2015, only two-and-a-half years after a cease-fire was declared due to a government-sponsored reconciliation process. The PKK previously focused on activity mostly in rural areas of southeastern and eastern Turkey, but since last year, it has become more active in cities and taken advantage of the civilian population, which it has used as involuntary human shields in their attacks on security forces. Authorities have conducted months-long campaign to wipe outthe PKK's urban presence, and occasionally impose lengthy curfews for counterterrorism operations. European Parliament members are often critical of curfews and anti-terror operations in general, claiming they violate freedoms in the region. Turkey defends the operations and laws, saying they are necessary in anti-terror fight.

Belgium is among several European Union countries where PKK supporters are active, acting as political activists. Several TV stations based in Belgium broadcast pro-PKK coverage, according to a report in AA. Belgian authorities occasionally conduct raids targeting the PKK, but many supporters of the terrorist organization who claim persecution in Turkey find asylum in European countries. The PKK, exploiting several nongovernmental organization fronts, is also active in other countries including Germany, Austria, Denmark, France, the Netherlands, Sweden and Greece.

Belgian authorities have repeatedly rejected Turkey's demands to extradite members of terrorist organizations, including the PKK and Revolutionary People's Liberation Party Front (DHKP-C). Zübeyir Aydar, a senior PKK figure also designated as an international drug trafficker by the United States, was arrested in Belgium six years ago but was released three weeks later. Similarly, Fehriye Erdal, a DHKP-C member accused of murder of a prominent businessman in Turkey, was released by Belgium.

Ömer Çelik, Turkey's EU minister and chief negotiator, wrote on Twitter that the exhibition was tantamount to providing space in European Parliament for an organization which has committed crimes against humanity. "European Parliament, supposed to defend universal values, must be the institution where most determined and clear position against terror is exhibited. The opening of an exhibition for propaganda of terrorism is against not only universal values, but also the values which the EU represents."

The Foreign Ministry issued a written statement that said both the ministry and the Turkish mission to the European Union "are carrying out political initiatives and conveying our reactions in this respect." The statement said preferring one terrorist organization over another was "disrespect to the memory of all victims of terrorism" and Turkey would continue to remind on every occasion that a principled approach must be adopted in the fight against terrorism.

'Aimed to hurt the public conscience'

Ozan Ceyhun, a former member of the European Parliament and a columnist for Daily Sabah, was in Brussels yesterday and visited the venue where the exhibition is on display.

Ceyhun told Daily Sabah the exhibition's organizers and the European Parliament were aware that it would draw a reaction from Turkey and "launched it in a venue allocated for controversial exhibitions." "It is pure PKK propaganda. There are photos of terrorists. The excuse from the organizers is that it is simply an exhibition about Rojava, about Kurds fighting DAESH and they don't have any captions or comments attached to the photos," Ceyhun said. He also said it was not the initiative of a single lawmaker as it was claimed by the Progressive Alliance of Socialists and Democrats. "Under European Parliament rules, members are required to have the approval of their group for the exhibition. Thus, the group sanctioned the exhibition," Ceyhun said.

He said that opening such an exhibition at a critical time, when the PKK has murdered officers and civilians in Turkey, was clearly aimed to hurt the public conscience in Turkey.

"I wonder how Germans would feel if the Turkish Parliament hosted an exhibition honoring Baader and Meinhof or the Red Army Faction," Ceyhun, who once served as a lawmaker in Germany, said, in reference to a German terrorist organization and its notorious leaders.
RELATED TOPICS