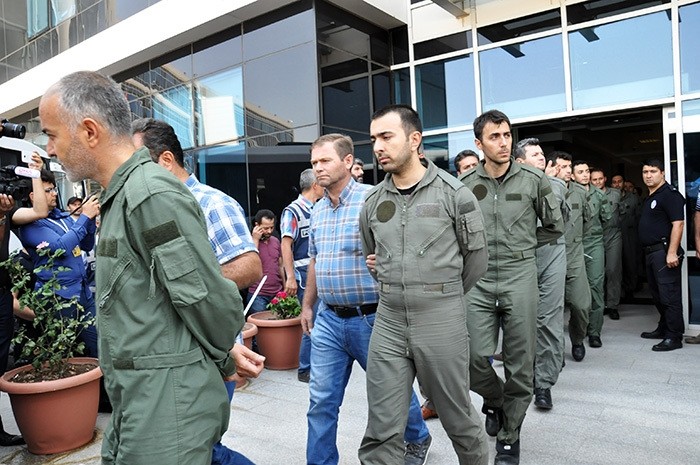 Turkey's government has said the attempted coup was organized by followers of U.S.-based figure Fetullah Gülen, who is accused of a long-running campaign to overthrow the state through infiltrating Turkish institutions, particularly the military, police and judiciary, forming a 'parallel state'.

At least 240 people, including members of the security forces and civilians, were martyred during the failed putsch, and more than 1,500 others were wounded as they protested against it.

A video released after the thwarted coup has shown a FETÖ-linked police officer entering a tank deployed outside of Istanbul Police Department on the night of July 15.

The officer had allegedly been suspended during an earlier parallel state probe over political espionage, but was reinstated.

Some videos on social media have also revealed that tanks captured by FETÖ members forced their way through traffic, striking people and cars.

In testimony given to Ankara prosecutors, Lieutenant Colonel Levent Türkkan, the aide of Chief of Turkey's General Staff Gen. Hulusi Akar, also admitted having links to the group.

Türkkan said he was a loyal member of the FETÖ group since his youth. "I am a member of the parallel state, or FETÖ. I have served this community for years voluntarily. I have obeyed the orders and instructions of the big brothers exactly," he said.

He also confessed to spying on former chief of staff Necdet Özel during between 2011 and 2015. Turkkan said he initially served as deputy aide and later became an aide after his chief retired.

Türkkan said he fulfilled the Gülen movement's orders after becoming a close aide in the General Staff.

"I was spying on [former] Chief of Staff Necdet Özel all the time. I put a bug in the room in the morning and took it back in the evening hours," Turkkan said. "The device has its own capacity and could wiretap for 10-15 hours."

According to Ankara Chief Public Prosecutor's Office, the authorities have reached text messages in a telephone belonging to Zeki T., one of former police chiefs held as part of the coup probe.

The messages read that "big brothers" should disobey the police orders. "All should head to General Staff, all of you contact each other, inform one another, even the retired ones. All retired ones in Ankara take their guns and shot all resisters [to coup]," he wrote in his messages.

Revealed evidence has also disclosed that the wives of two military suspects, Haldun Gülmez and Recep Zafer, were among those investigated in another FETO-linked case, a 2010 civil service recruitment exam scandal.

According to judicial sources who spoke on condition of anonymity, the two women are among 580 female suspects who are all wives of military officers reported to have answered all the questions correctly in the 2010 exam.

Theology professor caught at air base

Adil Öksüz, an assistant professor of theology at Sakarya University and allegedly a senior member of the Gülen movement there, was caught at Akıncı Air Base, north of Ankara on July 16.

During his interrogation, Öksüz claimed he was there to inspect land he intended to buy. However, it turned out he arrived in Turkey from a foreign country two days ago before the failed coup attempt.

During a raid on his office in the university on July 19, police seized documents and a book written by Fetullah Gülen.

On July 13, two days before the failed attempt, Ahmet Zeki Üçok, a retired colonel and military judge, claimed the Gülen-linked people had infiltrated the Turkish Armed Forces and prepared secret plans to take over the military.

Üçok said that the Gülen movement pursued a plan for youngsters that it had intended to send to the military. "It did not send these people to [certain] prep schools and made them switch their schools," Üçok said.

The Turkish military could have prevented these people from joining the armed forces during the admission period if they had determined their affiliations to the Gülen-linked schools.

Faik Tarımcıoğlu, a retired military judge, said that these renegade soldiers would be tired for being a member of the Gülen-linked movement and of attempting a coup.

"According to official statements, there has been 'actual, organic and mental commitment' between FETÖ and pro-coup soldiers. So, when you put these together, you see a cooperation between a crime ring previously established and pro-coup soldiers," Tarımcıoğlu told Anadolu Agency on July 20.