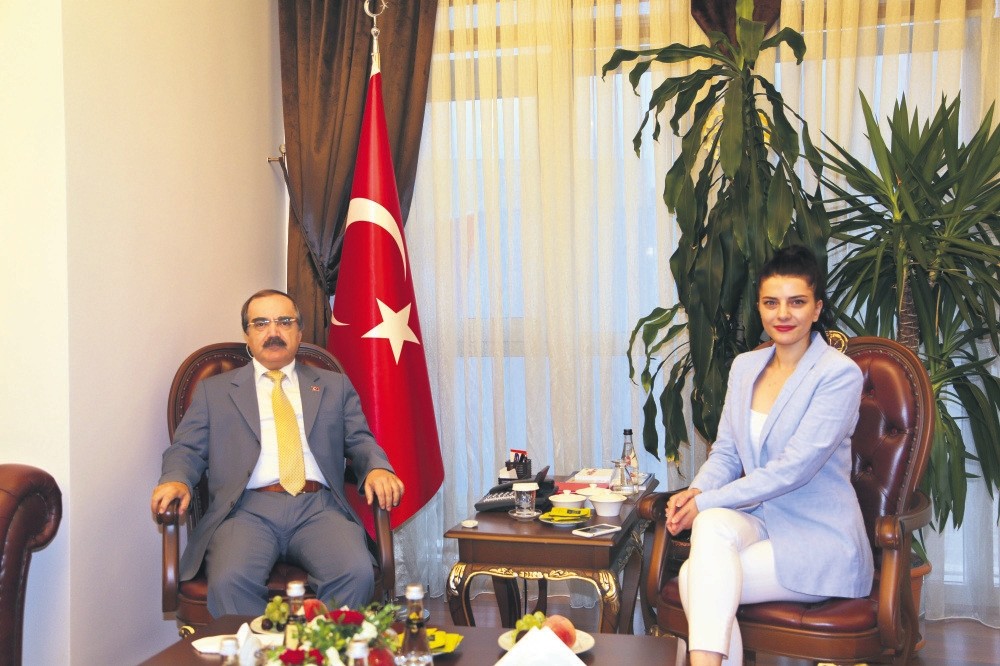 Governor of Sakarya, Hüseyin Avni Çoş, is considered one of the most significant figures in the national resistance on the night of July 15, facing off an attempted coup by putschists linked with the Gülenist Terrorist Organization (FETÖ). Since Sakarya was a critical location between Istanbul and Ankara, the province saw harsh attacks by the FETÖ-linked putschists. Çoş, whose fight against FETÖ dates back years, demonstrated brave resistance in standing side by side with the nation to face the guns of the treacherous putschists. A video recording that has circulated thousands of times on social media shows Governor Çoş shouting at the arrested putschists: "Don't you recognize an unlawful order? How could you dare to shoot your own civilians?" 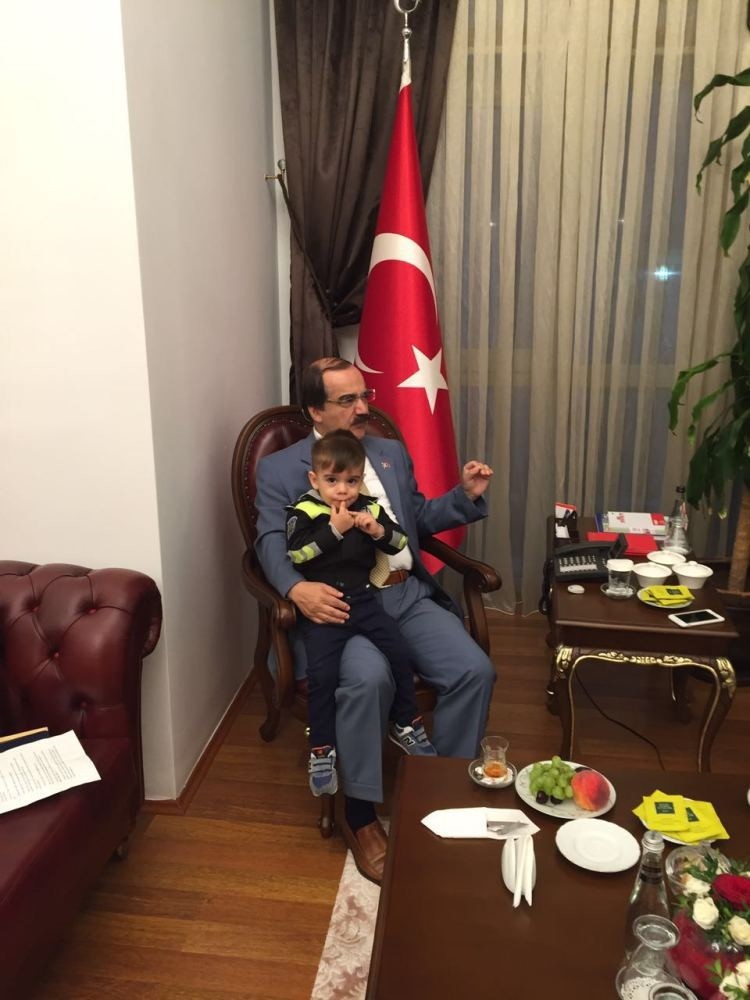 Governor Coş with his grandson.

Çoş was governor of the southeastern province of Adana when trucks belonging to the National Intelligence Organization (MİT) and carrying aid for Turkmen in northern Syria were intercepted by gendarmerie in 2014 upon the order of Adana Public Prosecutor Özcan Şişman. Governor Çoş reversed the order. Turkish Special Forces were directed to protect the trucks while Çoş headed to the scene and informed the gendarmerie that those trucks belonged to MİT, but in January 2014, the Adana Public Prosecutor still asked MİT to officially inform him with a formal letter. The first time that Turkey heard the name of Çoş was in connection to his firm stance against the MİT trucks incident.

Daily Sabah: What happened in Sakarya on July 15 on the night of the attempted coup? There are many photos and video recordings, including of you, Mr. Governor. What did you, Sakarya and the nation experience that night?

Hüseyin Avni Coş: I called the head of the police station on the night of the attempted coup and ordered him to be ready to defend the province, to get the police armed. I also ordered him to warn those (FETÖ-linked putschists) on the streets that if they did not take warnings into account, I would order the use of weapons. I told all the mayors in Sakarya to take to the streets with the people of Sakarya, and noted that if we do not take to the streets today, tomorrow would be too late. I called the Gendarmerie Second Commander a couple of times, but he did not answer and that is how we understood that the gendarmerie had sided with the putschists. I also learnt that the Brigade Commander Colonel had called the head of the police station that night to say that martial law was imposed, the Turkish Armed Forces (TSK) had taken over the state and those resisting would be charged in front of martial law courts. Later, an official from the Governorate informed us that dozens of putschists had encircled the Governorate Building and ordered them not to resist. They could not stop the putschists from coming in. Since the brigades and gendarmerie were taken over by the FETÖ-linked putschists, we arrived at the police station, the last force left to prevent the coup from succeeding. We directed civilians to take to the streets that night. Some civilians who had heard that the putschists had taken control of the Governorate arrived at the building. The putschists fired at police officers protecting the Governorate and civilians, but the people of Sakarya attacked the putschists due to outrage and handed them over to police officers. Fourteen people were injured, including women from the province. When we arrived at the Governorate, there were thousands of people waiting. To eliminate the risk of another attack by the putschists, we parked trucks and trailers in front of the Brigades in order to block tanks. I would like to express that even though other provinces fell into the hands of the putschists, Sakarya, with people of different ethnicities, had no intention of giving up.

DS:I would like to ask from you the story of the photo taken of you on the night of the attempted coup, which became iconic across the nation.

HAC: To make clear that we had no intention of giving up and that we would do our best to stop those putschists, I took my gun, which I have been carrying with me for some crucial situations, especially since I have been a target for FETÖ-linked and PKK-linked terrorists following the MİT Truck incidents in 2014. Because I am a target of those two terrorist organizations, I have an automatic rifle in my car. To show our citizens our determination to resist, I took it with me. Since they cannot capture us (we) alive, they might try to organize an assassination. In this kind of situation, someone's bodyguards may try to save themselves. That is why I have my gun by my side. Even though that photo came to symbolize civilian resistance, the real heroes behind the resistance were the people of Sakarya. We have two women and one young lady who were injured while resisting. Some thought that the putschists had taken me hostage, and came to the Governorate with the intention of rescuing me. From an elderly 80-year-old to 15-year-old teenagers, the people stood in the way of the bullets, to prevent such treacherous moves from success. What was important for FETÖ was realizing their aims, such as in the MİT truck incident. They have done everything possible to reach their goals, without caring for others' right to live. That is why I have classified them as more dangerous than the PKK. The PKK is outside the State, but these (FETÖ) have infiltrated within the State. To be united against them and to defeat them is harder, as they are embedded within the State.

Your row with FETÖ dated back to the MİT truck incidents in 2014. Now you said you have a rifle in your car to protect yourself against possible assassination. There are some allegations that some high-ranking commanders are missing, and they have a list of targets for assassination. What do you think about this issue?

HAC: We have no fear, as we cannot change how long we live. We will defend our country, no matter what. There is no fear within me. I am willing to give my life and be a martyr, if it is necessary, for my country.

DS: There is a video recording in which you shout at the arrested putschists, this video also turned into a symbol with millions of shares. What would you say about it?

Yes, there is a video recording where I yelled at those putschists. They encircled the Governorate and injured 14 civilians. When they were arrested, thousands of people were angry and waiting outside to lynch them. They were waiting in a safe room. I wanted to see those putschists who shot at innocent civilians. I asked them how they were able to shoot at their fellow civilians. They said that was the order, and I reminded them of military directives regarding gun lawful orders. All high-ranking soldiers know about unlawful orders, but they seized the Governorate outside of the chain of command. I had no information that someone had recorded it. He sent the video to a couple of his relatives. When I heard it, I asked him to delete it, but it was too late since it had started circulating on social media.

You said that there were 77 arrested out of 102 suspects. Are there some of those who have confessed to their relation with FETÖ?

The investigation is closed, but I would like to say that as far as I saw, there were a couple of middle- and low-ranking putschist soldiers who regretted what they had done. I assume that they will reveal their links with the FETÖ terrorist organization in time.

Horrified civilians explain how coup soldiers shot at them

There are four women among the 14 injured civilians shot by Gülenist Terror Organization- (FETÖ) linked putschists in the northwestern province of Sakarya during Friday's coup attempt, including 17-year-olds. Daily Sabah visited the wounded civilians at the hospital to listen to their experiences. Apart from two that were heavily wounded, the rest were injured in their legs as that is where the soldiers targeted. Fadime Çelik, the wife of Karaman's headman where Sakarya is located, took to the streets with her husband to protect the governorate since civilians believed that if putschists took over the governorate, it would have been a symbol of Sakarya's loss. "I took the front line against the soldiers. I thought they would not shoot us women. Even in war, no one shoots at women, do they? But I was mistaken. They fired at me and three of my female friends around me."

Mehmet Akyazıcı, a 38-year-old lawyer, was among the first civilians who took to the street on the night of the coup attempt. "I walked over those soldiers and yelled at them: 'I have four children, you are wearing a uniform bought with my taxes, you are holding a gun bought with my taxes. Are you going to shoot me? Then go ahead," said Akyazıcı, who only minutes after his call had putschists shoot him in the leg. He said he even riskdeath when he went out to defend the country. "I did my part, I went out, I resisted. I would either die at home if those putschists were successful, or on the streets while defending my country."