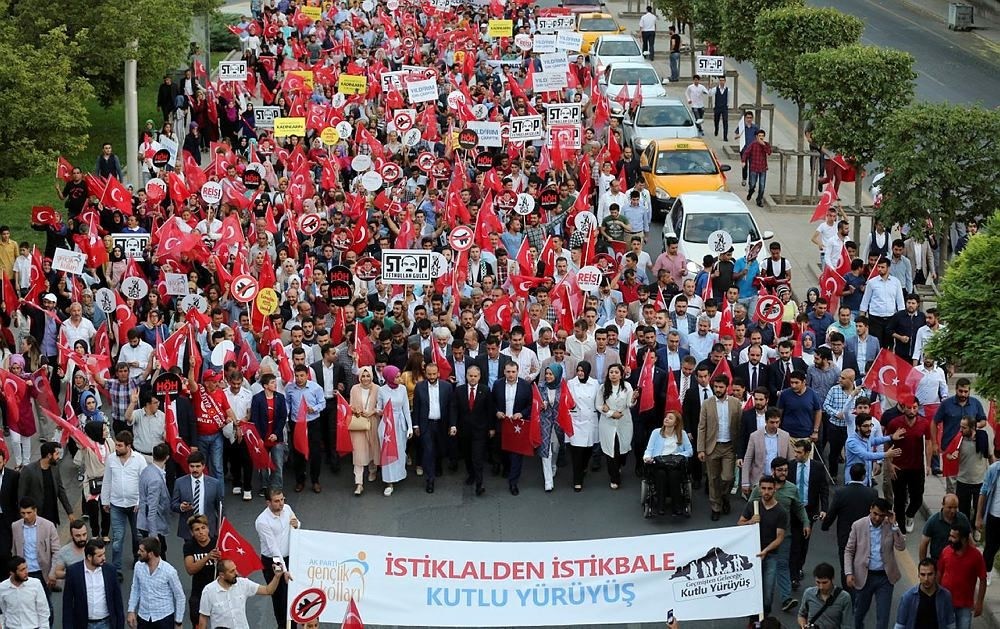 Thousands of young members of the ruling Justice and Development AK) (Party gathered in front of the Presidential Complex in Ankara on Thursday to protest the failed coup attempt in Turkey and express solidarity with the Turkish people who fought bravely against attacks on democracy.

Addressing the crowd, Melih Ecertaş, the head of the AK Party Youth Branch, said: "Turkish people gave a democracy lesson to the world with their bravery, faith, unity and solidarity while fighting against those traitors."

Pledging to build a stronger Turkey with the nation, the police force and soldiers who refused to target civilians during the coup attempt, Ecertaş said that he hopes that the members of the terror group who tried to stage the coup will be cleansed from all state institutions.

Ecertaş also said that they will never forget Western media's biased approach while covering the events during the coup and the representatives of countries who have watched the incidents to unfold before supporting the victorious side.

"As young people who fought against the soldiers of the Gülenist terror group on the Bosphorus Bridge, at airports and in front of the Presidential Palace, we continue our democracy watch here in front of the complex," Ecertaş said.

"We strongly resisted on the night of July 15 only to prevent the Turkish nation from experiencing the pains they had endured during the coups back in history and now we pledge to work tirelessly to revive 'a united Turkey'."

Ecertaş also offered condolences to the families of the victims who were killed while defending the country and wished a speedy recovery for those who were injured.